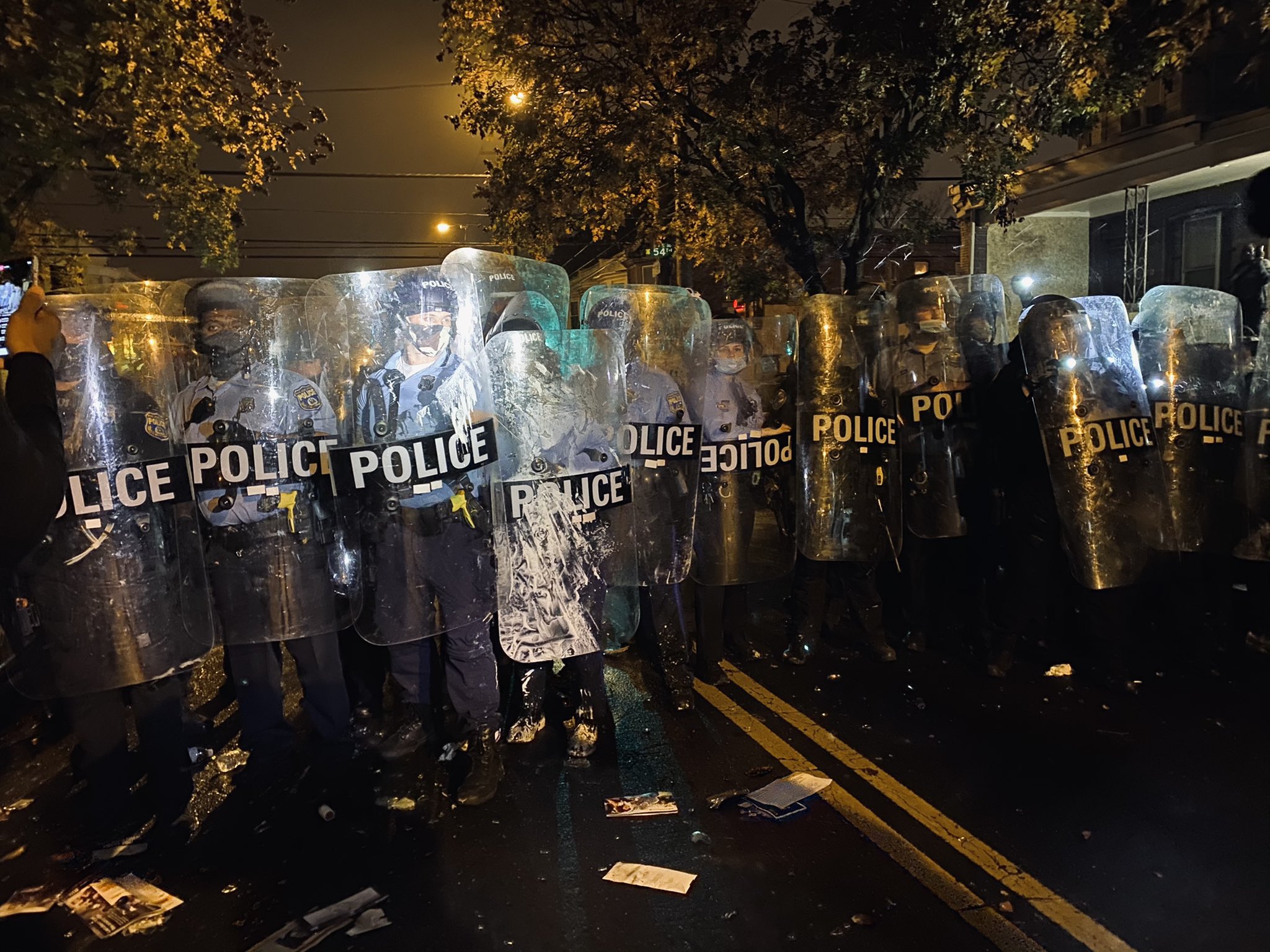 National Guard troops took up posts throughout Philadelphia on Friday as the city prepared for weekend protests related to the police killing of Walter Wallace Jr. and the crescendo of a contentious election cycle — all poised to collide with the intensifying coronavirus pandemic.

Mayor Jim Kenney called it “perhaps the most unprecedented time” in city history, and imposed another 9 p.m. curfew Friday due to the possibility of unrest. He did not say if he would keep it in place over the weekend.

The mayor and Police Commissioner Danielle Outlaw also announced that they and Wallace’s family had agreed to wait until Wednesday to release the 911 calls and body-worn camera footage from the two officers who fatally shot Wallace on Monday. The hope, Kenney said, was to “provide enough time to calm tensions and for the recordings to be released in the most constructive manner possible.”

“There’s multiple crises going on at any given time,” Kenney said. “I can’t tell you what’s going to happen on Saturday, Sunday, and onward, but we take it a day at a time.”

The mayor’s remarks came four days after the officers, responding to a radio call that reported an assault against an elderly man and woman, shot the 27-year-old Wallace as he wielded a knife outside his family’s West Philadelphia home. It marked the third time officers had been called to the house that day; Wallace had been seeking treatment for what his family said was bipolar disorder, and his mental health struggles had been cited by judges in his previous contact with the criminal justice system.

The killing has attracted national attention, and reignited a debate over the city’s Police Department, its policies for using force, and its response to impassioned demonstrations, some of which have coincided with looting or resulted in clashes between police and citizens. In one, officers were captured on video pulling a woman from an SUV during unrest in West Philadelphia, beating her, and separating her from her toddler, who had also been in the car.

Police said Friday that 214 people have been arrested in connection with the unrest, but just two of those arrests occurred Thursday. After two successive nights of protests, confrontations with police — which authorities said left dozens of officers injured — and businesses getting burglarized, Kenney implemented a curfew on Wednesday for one night.

The mayor said the decision to reinstate it Friday was prompted in part by the unofficial Halloween eve tradition known as Mischief Night. “We wanted to try to get as many people indoors as possible right at 9 o’clock,” Kenney said.

Four days after the killing, the police department and city officials still have not identified the two officers who shot Wallace when responding late Monday afternoon to his family’s home on the 6100 block of Locust Street.

The decision to wait to publicly release the body-camera footage and 911 calls from Wallace’s death was something of a surprise. City officials had shown the video to Wallace’s relatives on Thursday, and their lawyer, Shaka Johnson, said he thought the materials should be made public. Johnson told reporters the footage made clear Wallace was experiencing a mental health crisis, that people on his street were yelling to the police that he was mentally distressed, and that one officer told the other, “Shoot him,” before both began firing.

On Friday, the police officers’ union reiterated that it also wanted the evidence released.

The union’s president, John McNesby, said in a statement that body-camera video shows the officers telling Wallace “more than 20 times” to drop the knife he was holding, and ultimately opening fire when he did not. McNesby contended that the officers “were justified in their use of force under very difficult and stressful conditions.”

Kenney, during his news conference, declined to provide additional insight into why they chose next week as the release date. Attempts to reach the family’s attorney were unsuccessful Friday.

The Rev. Mark Kelly Tyler, senior pastor at Mother Bethel A.M.E. Church, who said he has spoken with Wallace’s relatives, supported the decision because it was a difficult week for them, and tensions this weekend were already bound to run high.

“Let’s imagine something goes terribly wrong after the release — how do you think the family is going to feel?” Tyler said.

Kenney said in addition to the video and 911 calls, he anticipated that the officers who shot Wallace would be identified when the other materials are released.

Protests over Wallace’s killing were scheduled for Saturday afternoon, starting on the block where he was killed.

Fire Commissioner Adam Thiel, who also serves as director of the city’s Office of Emergency Management, said of the weekend: “Of course, we all hope it’s entirely peaceful.”