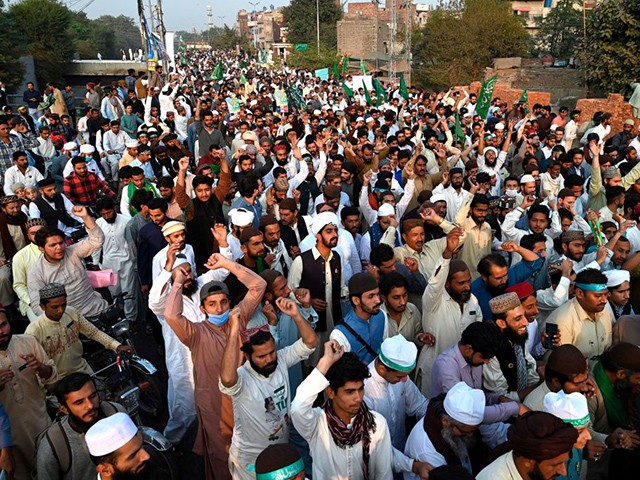 Pakistan’s University of Health Sciences (UHS) in Lahore, one of the most important medical research universities in the country, announced on Thursday that it will boycott French research and academic institutions due to comments made by French President Emmanuel Macron after a Muslim immigrant beheaded a French teacher on October 16.

Muslims in many countries declared boycotts of French products after Macron defiantly refused to denounce or forbid cartoons of Mohammed. French teacher Samuel Paty was gruesomely murdered after showing cartoons published by Charlie Hebdo magazine to his students.

Macron said “hate speech” is unacceptable, but France “will not give in, ever” to terrorist violence. He pledged his government would take action against “Islamist separatism” and described Islam as “a religion that is in crisis all over the world.”

Demonstrations at the French embassy in Pakistan’s capital of Islamabad turned violent on Friday. Some 10,000 followers of a radical Islamist cleric in Lahore, home of the UHS, marched in anti-French demonstrations and shouted that “beheading” is the “only punishment for blasphemy.”

UHS Vice Chancellor Javed Akram announced during an address to senior faculty on Thursday that there will be no further collaboration with French research or academic institutions. He condemned Macron’s statements as “blasphemous.”

Pakistani diplomat Sardar Masood Khan, who presides over the Pakistan-administered state of Azad Kashmir, gave an address to the UHS faculty in which he said Macron’s remarks illustrate “rising European nationalism.”

Khan also blasted India, Pakistan’s adversary in the contested Kashmir region. He accused India of using the coronavirus as an excuse to “ethnically cleanse Kashmiris” in the “eight stage” of a genocidal campaign against them.

“In Occupied Kashmir, a child can be sentenced to two years for merely chanting the slogan of independence. They are being persecuted because they are Muslims,” he said.

“India has taken a leaf from the Israeli playbook; it is adopting the so-called Nuremberg laws in Indian-Occupied Kashmir which are aimed at forcing people to migrate,” Khan charged.

According to Pakistan’s Dawn, a team of researchers from China’s Institute of Bioengineering was present for the UHS address. The head of the research team said trials of China’s experimental coronavirus vaccine were underway in Pakistan, with 2,000 volunteers registered so far.