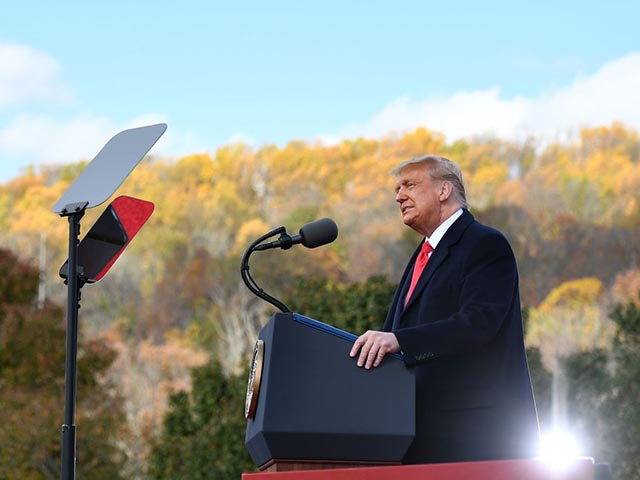 President Donald Trump recalled the difficult days of the Revolutionary War during a campaign stop Saturday in Newtown, Pennsylvania.

The president campaigned at Keith House, the headquarters of Gen. George Washington where he crossed the Delaware River in December 1776 with the remaining forces of the Continental Army and won the Battle of Trenton.

Trump recalled those “harrowing days” of the war, saying that “the American Revolution seemed lost.”

“Their sacrifice turned the entire tide of the war,” he said. “Those soldiers came from every walk of life. But what united them all was their devotion to the principle of self-government.”

The president used the story to set the scene of the upcoming election, telling supporters that “a great red wave” was forming across Pennsylvania and the entire United States to defend America’s founding values.

“This is the fundamental question facing every voter in America,” Trump said. “Do you want to be a nation ruled by the corrupt political class or do you want to be governed by the American people?”

Trump recalled his motivations for running for president in 2016, noting that Washington insiders continued to get rich while sacrificing communities like Pennsylvania.

“I ran for office four years ago because I could not sit by and watch any longer as a small group of Washington insiders continue to get rich bleeding America dry,” he said.

Trump pointed out former Vice President Joe Biden and others like him pursuing trade deals, foreign wars, and policies that hollowed out America’s communities.

“Here in Pennsylvania, you know this bitter and very painful betrayal all too well, better than most,” Trump said. “The corrupt Washington class launched an economic war against this state.”

The president said that Biden was a cheerleader for the North American Free Trade Agreement, China’s entry into the World Trade Organization, the Paris Climate Accord, and the Trans-Pacific Partnership trade deal, which gutted jobs in the state.

The president also quoted Winston Churchill, about his country having a “lion’s heart” and that he “had the luck to be called upon to give the roar.”

“I gave it the roar and there was a roar, and people hear it all over,” he said. “They heard it; they heard it four years ago, loud and clear, probably the biggest thing to happen.”

Trump referred to his three and a half year battle with the Washington establishment for his first term, promising to continue fighting for the American worker.

“I do what’s right for America. It’s made me a lot of enemies in Washington, but I wear their opposition as a badge of honor,” he said.