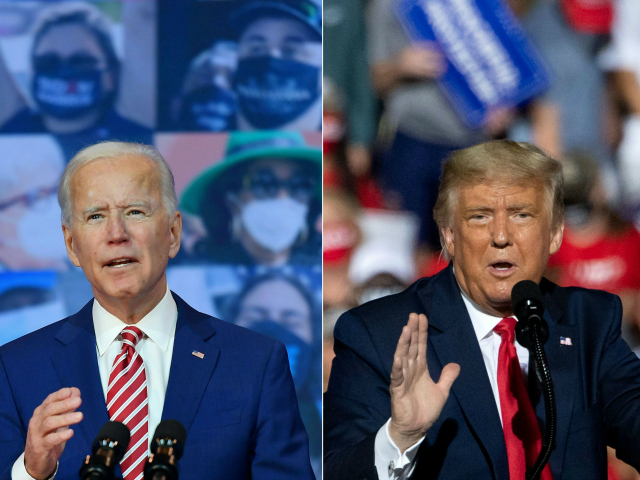 The presidential race in battleground Arizona is tightening in the final days leading to Election Day, as President Trump is diminishing Joe Biden’s (D) edge in the state, a Trafalgar Group survey released Friday revealed.

The survey found Trump leading in the Grand Canyon State 48.9 percent to Biden’s 46.4 percent. Less than one percent now remains undecided, according to the survey:

The survey, taken October 25-28 among 1,002 likely voters, has a margin of error of +/- 2.99 percent. It stands as one of the latest polls demonstrating the last-minute shift in the president’s favor in the final days beforea the election.

Friday evening snapshot of RCP’s average in battleground Arizona officially has Trump with a slim lead over Biden… pic.twitter.com/gULY69mtcz

The latest Trafalgar Group survey comes on the heels of Trump’s two stops in the state, holding rallies in Bullhead City and Goodyear on Wednesday. According to Republican National Committee (RNC) chairwoman Ronna McDaniel, a significant portion of signups for the rallies were not Republicans — 24 percent for the Bullhead City rally and 19.5 percent for the Goodyear event:

ARIZONA is fired up and ready to re-elect for @realDonaldTrump!

Thank you to the thousands of supporters who turned out!

Another huge turnout for @realDonaldTrump!

Thank you to everyone helping keep ARIZONA red in 2020!

Robert Cahaly, the chief Trafalgar Group pollster, has cautioned that most polls are not accounting for the “hidden” Trump support in key battleground states.

“The models of who’s going to turn out this year are very flawed. What type of person comes out for Trump? They’re not a normal election participant. They’re a low-propensity voter,” he continued. “We included them in all of our surveys in fall 2016, and we are including them now.”