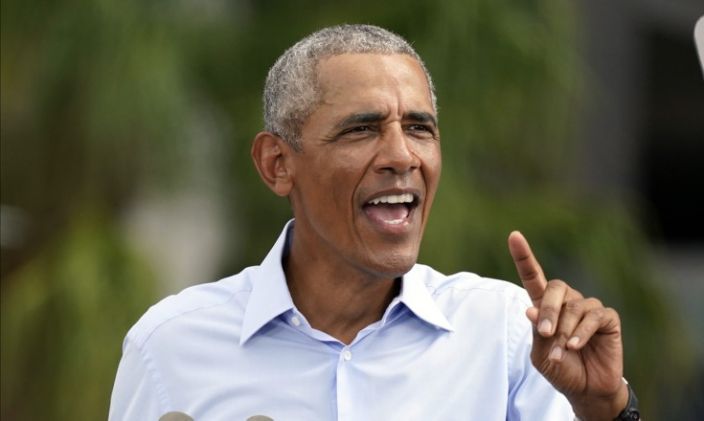 Barack Obama is uncorked and letting it fly.

For three-and-a-half years, he mostly honored the tradition that former presidents do not criticize their successors, even as his norm-breaking successor attacked him relentlessly. Verbally and in more than 3,000 tweets, President Trump ranged from falsely claiming in early 2017 that the “Bad (or sick) guy” tapped his phones to demanding that Obama be prosecuted for spying, treason and just generally being “the most corrupt President in US history.”

Now, in the closing days of the 2020 campaign, Obama is having his say, and then some.

But he’s also stumping for himself and his own maligned legacy.

In three recent solo appearances — in Philadelphia, Miami and Orlando, Fla. — Obama has seemed to have more fun than he did campaigning for himself in 2008 and 2012. On Saturday, he and Biden are scheduled to appear together, bringing their bromance to the battleground state of Michigan for drive-in rallies in Flint and Detroit.

The crowds are small and socially distanced at these drive-in gatherings, in keeping with the pandemic precautions that distinguish the Biden campaign from Trump’s larger, but riskier, rallies. Yet when Obama bounded onto each outdoor stage to U2’s “City of Blinding Lights,” casual in open-collar shirts with rolled-up sleeves, he removed his black mask as if ripping away a metaphorical muzzle he’s worn since Trump’s inauguration.

Out comes pent-up payback for years of unanswered attacks — to the cheers, honks and amens of his crowds.

Trump “hasn’t shown any interest in doing the work, or helping anybody but himself and his friends, or treating the presidency as anything more than a reality show that can give him the attention he craves,” Obama told the Orlando crowd Tuesday. “And he does crave attention!”

Just this week, “he was fussin’ about the crowd size at the inauguration again, saying his was bigger,” Obama went on, smiling widely.

“Who is thinking about that right now? Nobody except him. But the rest of us have had to live with the consequences: More than 225,000 people in this country are dead, more than 100,000 small businesses have closed, half a million jobs are gone in Florida alone.”

And what is Trump’s closing argument for reelection? “That people are too focused on COVID,” Obama said. “He’s jealous of COVID’s media coverage!” he laughingly added, prompting more horns and hoots from the crowd.

Much of Obama’s stump speech echoes his televised address in late August to the Democratic National Convention, from Philadelphia’s Museum of the American Revolution. The theme is the same: He’s been in the Oval Office with both men, Biden and Trump, and “they are very different people.”

Yet the performance is a remix: He’s replaced the solemnity of that speech with a stand-up shtick — and updated the COVID-19 death toll with an additional 55,000 deaths.

His crowds are diverse, filled with the young voters and people of color whose votes Biden needs more of. Those groups twice voted for Obama in large numbers, but the big question remains whether he can transfer his appeal.

His record on that isn’t good. Despite his efforts for Hillary Clinton, turnout of key parts of the Obama coalition fell in 2016, costing her the election. Enthusiasm for Biden has been weaker as well, polls show; in the Democratic presidential primaries, many young voters, in particular, backed Vermont Sen. Bernie Sanders or other more progressive candidates.

Obama tries to speak to those progressives, who are eager for bold change and frustrated by the polarization and paralysis of the government, and he defends the incremental change that he and Biden represent.

“The fact that we don’t get 100% of what we want right away is not a good reason not to vote,” Obama said at Philadelphia’s Lincoln Financial Field, home of the NFL’s Eagles. “It means we’ve got to vote and then get some change, and then vote some more and then get some more change and then keep on voting until we get it right.” Car horns sounded approval.

“He’s still got it,” said Kevin Madden, a senior advisor to 2012 Republican nominee Mitt Romney. “He has a really good muscle memory for how to reach the voter that has to be persuaded and the voter that has got good intentions and needs a push.”

Whether that push will be enough remains to be seen, but the smaller audiences won’t impede Obama’s message, Madden said. Video clips are “finding their way into social media, into the smartphones in all of those pockets.”

Obama vouches for “Joe” — “Somebody who cares about you and is thinking about you,” he said in an appearance in Miami last weekend — but he spends more time roasting Trump. That entertains the audience, but the former president also is seeking to correct the record — his record — from Trump’s claim that Obama and Biden left behind “a mess.”

“He wants full credit for an economy that he inherited. He wants zero blame for the pandemic he ignored,” Obama said in Orlando. “I just want to remind you,” he went on, that “America created 1.5 million more jobs in the last three years of the Obama-Biden administration than in the first three years of the Trump-Pence administration. That’s a fact. Look it up.” (He’s correct, according to Bureau of Labor Statistics data.)

“He in fact inherited the longest streak of job growth in American history, but just like everything else he inherited, he screwed it up,” Obama tells his crowds. Trump will be “the first president since Herbert Hoover to actually lose jobs” over his term.

He points out to each audience that the United States and South Korea recorded their first cases at the same time, and South Korea’s death rate, per capita, is 1.3% of the U.S. toll. Yet, Obama says, Trump tells interviewers he wouldn’t do anything differently.

“Really?” he said. “You can’t think of anything that you might be doing differently? Like maybe you shouldn’t have gotten on TV and suggested we might inject bleach to cure COVID?”

He notes that Trump has paid little or no taxes for years. In Miami he asked for a show of hands of anyone who, like Trump, had a secret Chinese bank account. (There were no hands, only laughs.) He complains that Trump was “missing in action” after reports that Russia offered bounties for killing U.S. soldiers in Afghanistan, and that he reportedly has called enlistees “suckers” and “losers.” (“Who does that?”)

He mocks Trump for alienating allies and “coddling” dictators: “You think he’s going to stand up to dictators? He thinks Lesley Stahl’s a bully!” And he skewers the president’s promises of a healthcare plan: “It’s been coming in two weeks for the last 10 years. Where is it? Where is this great plan to replace Obamacare?”

Even Obama’s praise for Biden and his running mate, California Sen. Kamala Harris, is often an implied condemnation of Trump: “You’re not going to have to worry about what crazy things they’re going to say, what they’re going to tweet. They’re just going to be too busy doing the work.” That gets a big rise.

As much as Obama seems to enjoy his own sarcastic send-ups, his performances run contrary to the less partisan brand he once promoted for himself.

Not that Obama entirely shied from the attack role in the past.

“He was plenty snarky,” said Lanhee J. Chen, a policy director for the 2012 Romney campaign and now a fellow at the Hoover Institution. “Let’s not make him into some snow angel that he wasn’t.”

But for more than three years, Obama resisted Democrats’ pleas to engage Trump.

“We’ve been reserving the gas in the tank for this moment,” said Eric Schultz, a senior advisor who has traveled with Obama. “The strategy of the post-presidency was always about speaking out when it can have impact and it moves the needle.”

Trump apparently is watching. On Tuesday he tweeted and then retweeted, “Obama is drawing VERY small (tiny) numbers of people. Biden is drawing almost no one. We are drawing tens of thousands of people.” In a third tweet, he complained that Fox News was broadcasting “Obama’s no crowd, fake speech for Biden.”

As Obama tells his rally-goers, “Tweeting at the TV doesn’t fix things.”

Separate from the rallies, Obama makes other get-out-the-vote efforts. He recorded an interview with the Los Angeles Lakers’ LeBron James to air Friday night on HBO — outside the paywall. He has done radio ads, robocalls, Zoom fundraisers and social media events. Before his Miami rally, he stopped at a teachers union office in a heavily Latino community to meet campaign volunteers, and in Philadelphia, he met with young Black men at a youth center.

Outside afterward, he grabbed a bullhorn to pump up party organizers: “Folks, seeing your effort out there is going to be inspiring. Don’t be discouraged.”

In that spirit, he leaves his rallies to Bruce Springsteen’s “Land of Hope and Dreams.” He restores the mask, with big white letters saying “VOTE,” to circulate briefly among voters. It will come off again soon.