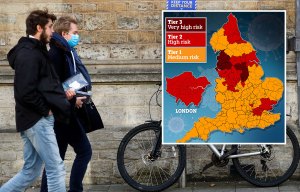 AT LEAST four people have been killed and 120 injured as a powerful earthquake destroyed buildings in Turkey and triggered a tsunami that swept through coastal areas.

The quake‘s epicentre was 11 miles north of the Greek island Samos off the coast of Turkey, a region popular with Brit tourists.

At least 20 buildings in Izmir, a Turkish city with population of 4.4million, are said to have collapsed, Mayor Tunc Soyer told CNN Turk.

He said: “There may be loss of life.”

Rescue efforts are already under way as scores of people are feared dead – but there are no official figures on victims.

Pictures and video posted on social media show large clouds of dust rising over the city following the earthquake.

People are seen running for their lives after as the apparent tsunami breached sea defences following the earthquake.

The quake was also felt across the eastern Greek islands, such as Mykonos and Kos, and tsunami warnings were issued to many beachgoers.

Greek media said the residents of Samos and other islands fled their homes, while some rockfalls were reported.

Seismologist Efthymios Lekkas told Greek state television ERT that it was still too early to say whether this was the main earthquake.

“It was a very big earthquake, it’s difficult to have a bigger one,” said Lekkas.

Some two million foreign tourists visit Izmir every year, according to data from the Aegean Touristic Enterprises and Accommodation Union.

Specialist search and rescue teams rushed to the city to help in the desperate hunt for survivors buried alive in the rubble.

Witness Teoman Cüneyt Acar told Haberturk: “I was in a grocery store in Gaziemir during the earthquake.

“I saw that all my belongings started to fall. My mother was caught in the house. I saw my mother at the street door and everyone was outside.

“I entered the house during the aftershocks and I saw that there were cracks in the columns.

“According to him, some old buildings are in ruins. The shaking lasted 40-45 seconds.”

Witnesses said people flooded onto the streets in the popular tourist city after the quake struck.

Turkish officials and broadcasters called on people to stay off the roads so emergency vehicles can move quickly to the disaster zone.

The quake struck at around 11.50am GMT and was felt along Turkey’s Aegean coast and the northwestern Marmara region.

Turkeys Disaster and Emergency Management Presidency said the earthquake was centered in the Aegean Sea at a depth of 10.3 miles.

The earthquake is an event that is evolving, Lekkas said, adding that some damage had been reported in parts of Samos.

A tsunami warning was issued, with residents of the Samos area told to stay away from the coastline.

It read: “Stay away from the coast. Danger from high waves due to earthquake.”

Water rose above the dock in the main harbor of Samos and flooded the street.

The regional governor of the Samos region, Yiannis Stamoulis, said no injuries had been reported on the island.

Residents have also been told to stay away from buildings, as aftershocks continued to rattle the area.

The Deputy Mayor of Eastern Samos said to ANT1 that buildings have fallen and that there are reports of large waves.

One of the fallen buildings on the island is the church of Panagia Theotokou in Karlovasi.

The chief of Samos hospital workers union told: The Greek City Times: “A few minutes ago we experienced a very big earthquake similar to that Samos has been experiencing for many years.

OUT IN THE COLD

“People are panicking. They have gone out in the squares, in the streets.”

He added: “It was an earthquake that lasted several minutes. Very strong.”

For the latest news on this story keep checking back at Sun Online.

Thesun.co.uk is your go to destination for the best celebrity news, football news, real-life stories, jaw-dropping pictures and must-see video.