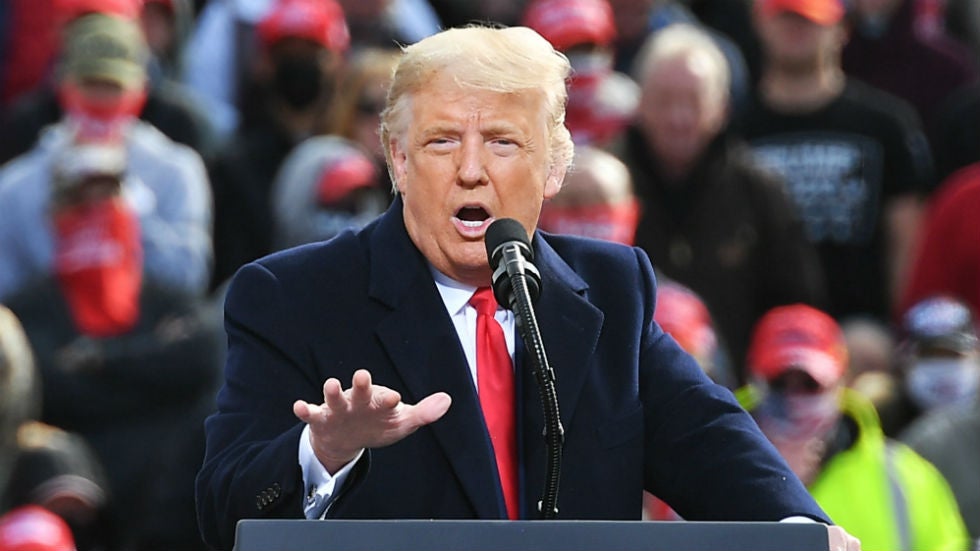 President TrumpDonald John TrumpBiden campaign slams Facebook after thousands of ads blocked by platform’s pre-election blackout Mnuchin says he learned of Pelosi’s letter to him about stimulus talks ‘in the press’ Harris to travel to Texas Friday after polls show tie between Trump, Biden MORE on Friday sought to preemptively place blame on the Supreme Court should he lose reelection and said that Democratic nominee Joe Biden

Trump’s tweets followed a handful of rulings by the Supreme Court in cases involving deadlines for mail-in ballots in the 2020 election.

“If Sleepy Joe Biden is actually elected President, the 4 Justices (plus1) that helped make such a ridiculous win possible would be relegated to sitting on not only a heavily PACKED COURT, but probably a REVOLVING COURT as well,” Trump tweeted early Friday morning. “At least the many new Justices will be Radical Left!”

If Sleepy Joe Biden is actually elected President, the 4 Justices (plus1) that helped make such a ridiculous win possible would be relegated to sitting on not only a heavily PACKED COURT, but probably a REVOLVING COURT as well. At least the many new Justices will be Radical Left!

Trump in an earlier tweet also claimed that Biden would “destroy” the Supreme Court and warned: “Don’t let this happen!”

Biden has sidestepped questions about whether he would support court packing, or adding to the number of justices to the Supreme Court.

The former vice president said in a “60 Minutes” interview last week that he would convene a bipartisan commission to present recommendations to reform the court system, calling it “out of whack.”

The president has long railed against efforts to expand mail-in voting during the coronavirus pandemic, claiming that doing so would invite massive fraud. Experts say there is no evidence of meaningful electoral fraud in mail-in voting.

Republicans received a victory in Minnesota on Thursday when a federal appeals court ruled that the state must keep late-arriving ballots separate in case they are ruled invalid.

“Hopefully the few states remaining that want to take a lot of time after November 3rd to count ballots, that won’t be allowed by the various courts,” Trump told reporters Wednesday before the rulings in Pennsylvania, North Carolina and Minnesota were handed down.

The rulings in Pennsylvania and North Carolina will allow ballots that are not postmarked after Election Day and that arrive three and nine days after Election Day, respectively, to be counted. In a separate ruling that represented a win for Republicans, the Supreme Court kept in place a Nov. 3 deadline in Wisconsin for the receipt of mail ballots.