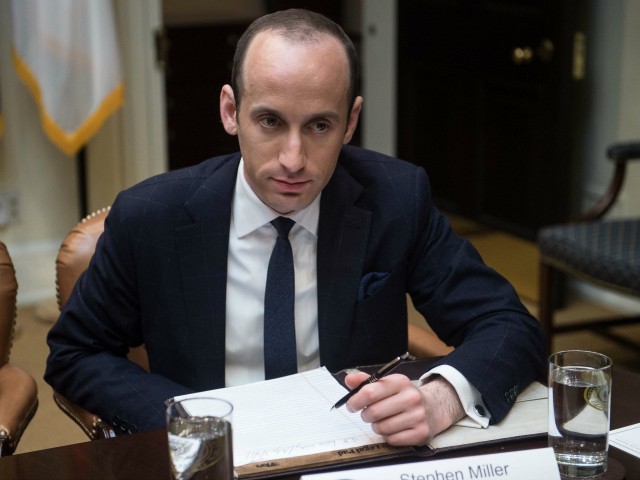 White House senior adviser Stephen Miller spoke with Breitbart News as well as various reporters about the choice Americans face in the 2020 election regarding immigration and border security.

Breitbart News received permission from Miller and the Trump campaign to release the audio of his comments.

Miller responded to a question from Breitbart News about reports suggesting the president no longer pressed a tough immigration agenda in his reelection campaign.

Miller ticked off a list of some of the president’s immigration accomplishments, including securing the Southwest border of the United States, requiring immigrants to be financially self-sufficient, forging partnerships with Latin American countries to reduce the flow of migrants and illegal immigration from their countries, instituting travel bans to keep radical Islamic terrorists out of the country, and securing a large portion of a wall on the southern border.

Trump, Miller said, was campaigning on his record of keeping his promises on immigration issues.

Miller spoke in his personal capacity as an adviser to the Trump campaign and not in his role as a paid government employee.

The majority of Miller’s conversation was a warning of what Joe Biden would do to the successes of the Trump administration.

“No country on planet Earth ever conceived of attempting what Joe Biden is proposing,” Miller said.

A Biden administration would cripple President Trump’s immigration achievements that Miller has meticulously worked to enact.

“It would be a nightmare of epic proportions and a particular blow to African American and Hispanic communities in our country,” Miller said, describing it as “a radical outlier in the whole of human civilization.”

He explained that Biden’s plan was far beyond the disastrous immigration policies of President Barack Obama’s administration that President Trump inherited and even worse than failed presidential candidate Hillary Clinton’s proposals.

Biden, Miller explained, would unilaterally overturn all of the Trump administration’s gains to close the loophole that human traffickers and smugglers used to exploit the country’s asylum system and end the practice of “catch and release.”

Previously, border enforcement agents were forced to release migrants claiming asylum at the border into the United States after they were assigned a court date.

Smugglers, traffickers, cartels, and other criminal organizations, Miller explained, would return to their practice of coaching migrants to present “so-called credible fear claims to border agents to gain automatic release and entry into the country.”

The concern, according to Miller, was that Biden’s action would unleash a flow of millions of migrants into the United States.

“Within a week of that happening, there would be a rush on the border on a global scale unseen before in the whole of human history. Every smuggling and trafficking organization on planet Earth would get the news, and millions, millions, will come,” he said, adding, “not just from this hemisphere, but from the whole of the planet.”

Miller said the problems Biden would unleash were much bigger than illegal immigration from Mexico and would stretch far into America’s communities.

Miller also warned that Biden would allow a 700 percent increase in refugees resettling into the United States, including from terror-ridden countries such as Syria, Somalia, and Yemen.

“Biden represents the corrupt Washington establishment far-left policy that has invaded foreign countries and fought foreign wars and left us in foreign conflicts while having open borders to unlimited migration to the most dangerous places in the world,” he said.

The Biden refugee policy would create a “breeding ground” of extremism and terrorism in the United States, Miller warned, as states would experience explosive increases in immigration refugee admissions and migration from terrorist regions.

He noted that multinational terrorist organizations worked within refugee communities to radicalize individuals.

“Minnesota, as an example, has seen firsthand how terrorist organizations are able to take advantage of the refugee program to threaten national security and obtain new recruits,” he said.

Biden’s “nationwide sanctuary city policy” would allow detained illegals arrested by state and local officials to go free instead of turning them over to ICE, allowing more foreign terrorists to slip through the cracks.

“It is a brazen attack on public safety,” Miller said.

He warned that Biden would terminate the Trump administration’s travel bans, opening the country to individuals from dangerous countries.

“The Biden plan would be an open border, completely, totally absolutely,” he concluded. “It is not hyperbole. It is not an exaggeration. It is the cold, hard truth. Tens of millions will come from every single part of planet earth.”