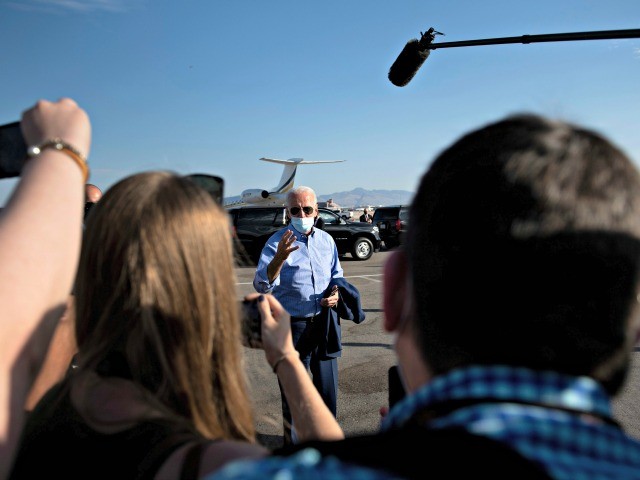 A local television reporter in Nevada complained on air after she was cut off by Joe Biden’s campaign after just two questions on Wednesday.

Vanessa Murphy of KLAS said she had a “list of questions” to ask the Democrat nominee, but the interview did not go as she expected.

A Nevada reporter says she was only allowed to ask Joe Biden TWO questions before his handlers abruptly cut off the zoom call.

Joe Biden is terrified of being asked about Tony Bobulinski and the Biden family’s Chinese pay-to-play scandal. pic.twitter.com/5fY7f5ztUR

“I was cut off after only two questions,” Murphy said during her report.

She said she was given five minutes “even with Nevada being a swing state.”

She said Biden apologized “but his campaign ended the Zoom interview.”

In Murphy’s published report of the interaction, she said, “The I-Team then emailed a couple of additional questions but, have not received a response.”

Murphy said she asked about Nevada’s unemployment and the state’s coronavirus response before she was prematurely cut off.

Other reporters have attempted to question Biden longer than his campaign preferred and have suffered similar fates.

In July, Biden was speaking to ABC 15 in Arizona when an aide, identified as Ari Krupkin on the screen, interrupted the conversation:

“Steve, that’s our time,” a voice said as Krupkin’s name — presumably from Zoom — appeared on the ABC 15 studio screen.

“Okay, alright. I appreciate your time, uh, thanks so much to Mr. Vice President, as well,” anchor Steve Irvin said.

Earlier that month, NBC 12, also in Arizona, was abruptly cut off, as well:

About six minutes into the appearance, a Biden aide tried unsuccessfully to cut off anchor Mark Curtis.

After about 10 minutes, Curtis asked another question, and the Biden aide said Curtis’s time was up. Then Biden’s feed went black.

“Mark, that’s our time. Thanks so much,” the aide could be heard saying amid the abrupt ending.

Biden then suddenly appeared full screen and answered the question. The interview ended with no thank you or sign off.