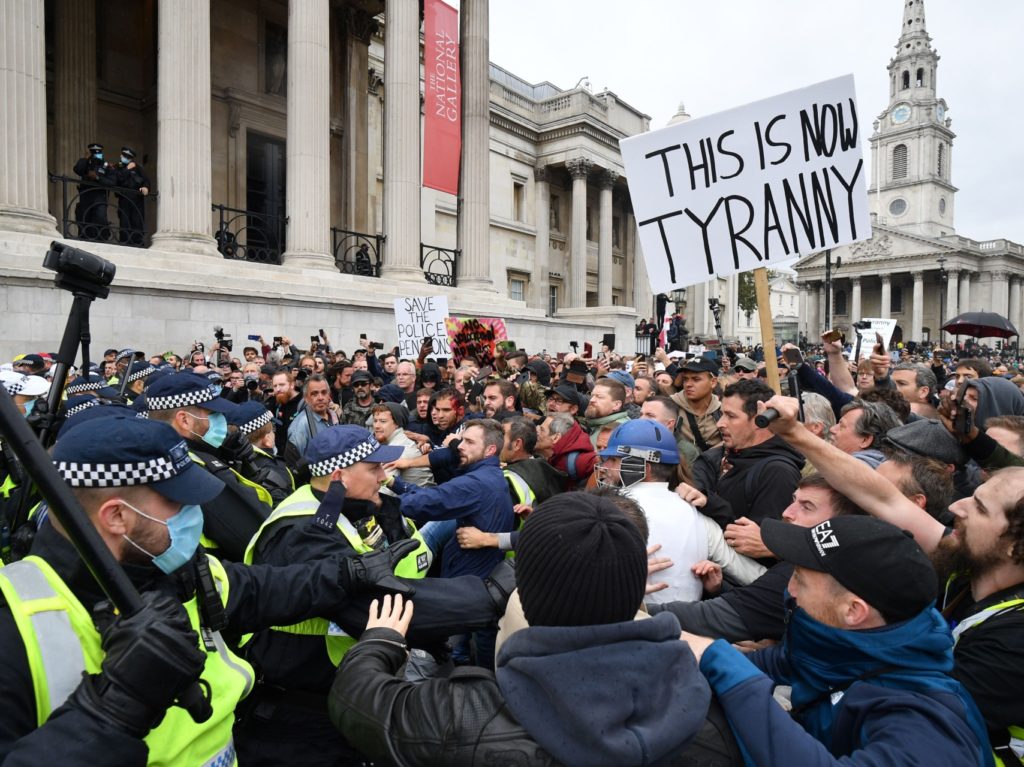 The United Kingdom is in serious danger of replacing democracy with totalitarianism, one of Britain’s most distinguished legal minds, Lord Sumption has warned.

During the Covid-19 pandemic, the British state has exercised coercive powers over its citizens on a scale never previously attempted. It has taken effective legal control, enforced by the police, over the personal lives of the entire population: where they could go, whom they could meet, what they could do even within their own homes. For three months it placed everybody under a form of house arrest, qualified only by their right to do a limited number of things approved by ministers. All of this has been authorised by ministerial decree with minimal Parliamentary involvement. It has been the most significant interference with personal freedom in the history of our country. We have never sought to do such a thing before, even in wartime and even when faced with health crises far more serious than this one.

Many of the measures forced by the government, Sumption maintains, were probably illegal. He notes that the government has claimed to derive authority for its most draconian measures from the Public Health (Control of Disease) Act 1984, as amended in 2008. But this Act grants magistrates the rights to quarantine, isolate or disinfect infectious people. It makes no provision, he says, for the control of healthy people.

There is no specific power under the Act to confine or control the movements of healthy people. To interpret it as conferring such a power would not only be inconsistent with the principle of legality.

Even the lockdown itself was, at least initially, illegal.

In his televised press conference of 23 March, the Prime Minister described his announcement of the lockdown as an “instruction” to the British people. He said that he was “immediately” stopping gatherings of more than two people in public and all social events except funerals. A number of police forces announced within minutes of the broadcast that they would be enforcing this at once. The Health Secretary, Mr. Hancock, made a statement in the House of Commons the next day in which he said: “these measures are not advice; they are rules.” All of this was bluff. Even on the widest view of the legislation, the government had no power to give such orders without making statutory regulations. No such regulations existed until 1 p.m. on 26 March, three days after the announcement. The Prime Minister had no power to give “instructions” to the British people, and certainly no power to do so by a mere oral announcement at a Downing Street press conference. The police had no power to enforce them. Mr Hancock’s statement in the House of Commons was not correct. Until 26 March the government’s statements were not rules, but advice, which every citizen was at liberty to ignore.

He is concerned too about the ‘remarkable discretionary powers of enforcement conferred on the police’. The police, he notes, have ‘substantially exceeded’ even these ‘vast powers.’

In the period immediately after the announcement of the lockdown, a number of Chief Constables announced that they would stop people acting in a way which the regarded as inessential, although there was no warrant for this in the regulations. One of them threatened to go through the shopping baskets of those exercising their right to obtain supplies, so as to ensure that they were not buying anything that his constables might regard as inessential. Other forces set up road blocks to enforce powers that they did not have. Derbyshire police notoriously sent up surveillance drones and published on the internet a film clip denouncing people taking exercise in the Derbyshire fells, something which people were absolutely entitled to do. When I ventured to criticise them in a BBC interview for acting beyond their powers, I received a letter from the Derbyshire Police Commissioner objecting to my remarks on the ground that in a crisis such things were necessary. The implication was that in a crisis the police were entitled to do whatever they thought fit, without being unduly concerned about their legal powers. That is my definition of a police state.

The British public, he concludes, has been frightened by government propaganda into demanding authoritarian protection – in the name of ‘safety’ – which it will come seriously to regret.

The British public has not even begun to understand the seriousness of what is happening to our country. Many, perhaps most of them don’t care, and won’t care until it is too late. They instinctively feel that the end justifies the means, the motto of every totalitarian government which has ever been. Yet what holds us together as a society is precisely the means by which we do things. It is a common respect for a way of making collective decisions, even if we disagree with the decisions themselves. It is difficult to respect the way in which this government’s decisions have been made. It marks a move to a more authoritarian model of politics which will outlast the present crisis. There is little doubt that for some ministers and their advisers this is a desirable outcome. The next few years is likely to see a radical and lasting transformation of the relationship between the state and the citizen. With it will come an equally fundamental change in our relations with each other, a change characterized by distrust, resentment and mutual hostility. In the nature of things, authoritarian governments fracture the societies which they govern. The use of political power as an instrument of mass coercion is corrosive. It divides and it embitters. In this case, it is aggravated by the sustained assault on social interaction which will sooner or later loosen the glue that helped us to deal with earlier crises. The unequal impact of the government’s measures is eroding any sense of national solidarity. The poor, the inadequately housed, the precariously employed and the socially isolated have suffered most from the government’s measures. Above all, the young, who are little affected by the disease itself, have been made to bear almost all the burden, in the form of blighted educational opportunities and employment prospects whose effects will last for years.

Democracy, he says, may now be finished in the United Kingdom.

What will replace it is a nominal democracy, with a less deliberative and consensual style and an authoritarian reality which we will like a great deal less.

‘This is What a Police State is Like’: Ex-Supreme Court Justice Sounds Alarm on Lock down Overreach https://t.co/tbiGTlT5TR