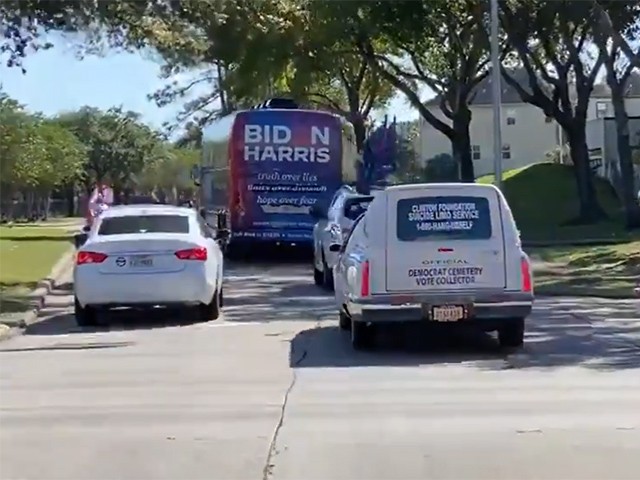 A Trump supporter with an “Official Democrat Cemetery Vote Collector” hearse tailed a Biden campaign bus in Houston on Thursday, leading to the vehicle running at least one red light in an attempt to get away.

Video showed the bus at a red light before driving through it, causing a delivery van driver to jam on the brakes:

The hearse, which sports a “Trump Keep America Great” logo on the driver’s door, and Thin Blue Line, Trump, and American flags, also trolls Democrats with such sayings as:

A video posted on Facebook by John Grebe shows the pursuit by the hearse on a congested highway. He noted the Trump supporter immediately behind the bus, the hearse, and a train of other Trump supporters behind:

The bus is part of Biden’s effort to win the state, the Houston Chronicle reported. It was in the midst of a state-wide tour, titled, Battle for the Soul of Our Nation Bus Tour, and neither candidate was aboard.

Kamala Harris is scheduled to be in Houston on Friday. It is unlikely Biden will visit again before Election Day.

h/t Not The Bee