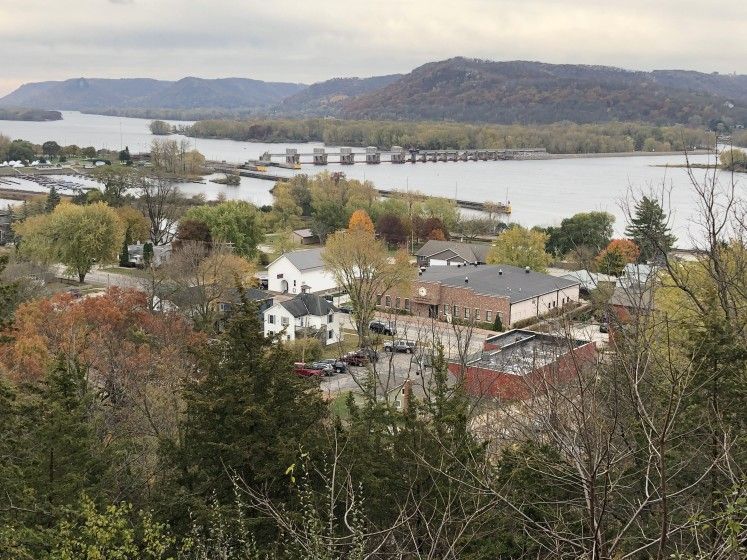 Doris Deutsch thought the coronavirus would never hit too hard in Trempealeau, a village on a rural stretch of the Mississippi River in Wisconsin.

So the 81-year-old retiree was caught off guard when she fell ill last month with COVID-19.

The pandemic is rampaging through the small towns of this battleground state just as the presidential campaign draws to a close, a sign of trouble for President Trump. Deutsch is one of more than 1,000 people in her dairy-farm county who have been sickened by COVID-19, most of them since Labor Day.

A devout Catholic who displays a “Make America Kind Again!” sign on her front lawn, Deutsch had ample complaints about Trump even before the virus struck. Now, his chronic flouting of public health expertise is only heightening her determination to get him out of office.

“I don’t know if he could have stopped the whole thing, but what a difference if he had stepped up to the plate,” Deutsch, a Democrat who used to sell antique telephones, told a visitor to her small red house overlooking the river. She’s voting for Democrat Joe Biden.

Trump’s narrow win in Wisconsin was a key to his 2016 defeat of Hillary Clinton. To carry the state again, the Republican president will need to match, if not exceed, his lopsided victory margins in the state’s rural counties. But the intensity of his opposition makes that a tall order.

“The mobilization, that’s no joke. People who do not like Donald Trump have really gotten their act together in Wisconsin,” said Katherine Cramer, the author of “The Politics of Resentment: Rural Consciousness in Wisconsin and the Rise of Scott Walker.”

Trempealeau County and neighboring counties along the river backed Democrats Al Gore, John F. Kerry and Barack Obama before swinging to Trump. “There’s this independent streak in that part of the state,” said Cramer, a professor of American politics at the University of Wisconsin in Madison.

Rural counties on the Mississippi don’t skew toward Republicans the way some of the regions inland do, said Paul Maslin, a Democratic pollster in Madison. Biden is better liked than Clinton, third-party candidates are drawing less support than they did four years ago, and many older voters have soured on Trump because of his handling of the pandemic. Trump is trailing Biden in statewide polls.

“All these little marginal differences add up to something,” Maslin said.

The deadly intrusion of the virus into every corner of Wisconsin is dominating the campaign’s final days. Local television newscasts feature nightly updates of each county’s COVID-19 deaths and caseloads, along with stories of overwhelmed hospitals. Coverage of Trump’s packed rallies in Wisconsin and other states offer jarring reminders of his cavalier approach to the health hazards.

Despite tepid support for Biden, the visceral dislike of Trump among the president’s detractors in Wisconsin’s swing farm counties suggests they are highly motivated to vote.

“I’m not really that impressed with him,” Deutsch said of the former vice president. “I think he’s a little wishy-washy. But he’s not Trump.”

In farm counties across Wisconsin and the nearby battlegrounds of Minnesota and Iowa, a cultural affinity with Trump’s pro-gun and antiabortion politics endures, but his chaotic presidency has put off many voters.

A Fox News survey last week found Trump just 6 percentage points ahead of Biden among Wisconsin’s rural voters, a steep drop from his 27-point lead among that group in 2016 exit polls. Trump needs rural voters to offset Biden’s support elsewhere, especially in the Democratic strongholds of Milwaukee and Madison.

Rural turnout for Trump is still sure to be strong. The abundance of jumbo Trump campaign signs outside homes and farms in Trempealeau County reflect his supporters’ loyalty. “Make America Pro-life Again!” one of them says.

“He’s not a career politician, and he’s pretty much kept all the promises that he’s made,” said Bill Schaffner, a contractor who keeps a life-size cardboard cutout of Trump on the front porch of his house down the street from Deutsch’s.

Trempealeau County is overwhelmingly white. One of its few ethnically diverse communities is Arcadia, a city of 3,000 about 25 miles inland from the river.

Nearly a third of its residents are immigrants, mainly from Mexico and Central America. Many work at the Ashley Furniture factory or the Pilgrim’s Pride poultry plant. Yard signs all over town showcase many of their neighbors’ support for the staunchly anti-immigrant president.

Just up Main Street from a house with a blue “Trump 2020 — No More Bullshit” banner is Uncle Sam’s bar. On display above the entrance is a Confederate flag.

“I fly it to honor all veterans who lost their life, whether it’s North or South,” said owner Skip Kaltenhauser.

Next door is a taqueria. Across the street is a Mexican grocery store.

Arcadia has been a center of the county’s COVID-19 outbreaks, which have disproportionately affected Latinos, said Paraic Kenny, a tumor geneticist who has been tracking the region’s coronavirus spread for Gundersen Health System in La Crosse, Wis.

Resistance to wearing face coverings has been a big driver of contagion, he said, and the virus is spreading fast in bars and private gatherings.

Even as Wisconsin keeps hitting record highs of COVID-19 hospitalizations and deaths, Trump denounced public health restrictions on Saturday at a rally outside Milwaukee.

“Your state has to open,” he told thousands of cheering and mostly maskless supporters gathered shoulder-to-shoulder in defiance of health guidelines.

The daily number of new COVID-19 cases nationwide has reached the highest levels of the pandemic in recent days, but Trump told the crowd, “It’s going away.”

“We’re rounding the turn,” he said as the nation’s COVID-19 death toll surpassed 225,000. On Wednesday, he tweeted: “Covid, Covid, Covid is the unified chant of the Fake News Lamestream Media.” Once the election is over, he added, “the talk will be how low the death rate is, plenty of hospital rooms.”

That attitude infuriates Amy Cornelius, 49, an independent who backs Biden. Trump is “not setting a good example, not wearing a mask, making fun of people wearing masks,” said Cornelius, who is studying to be a real estate broker. She was wearing a cloth mask as she pulled up to a nail salon in Trempealeau village. A friend’s father died of the disease. “I want to keep my family healthy,” she said.

Retired teacher Julie Howard, out for a walk a few blocks away, shares the same opinion of Trump. “He disregards all of the health information that’s out there on crowds,” said Howard, 75, a Democrat who supports Biden.

Until the weather turned cold, Howard’s book group was gathering outdoors on chairs six feet apart. She dreads the winter isolation ahead. “It’s going to be terrible,” she said.

Howard called Trump “a disgrace to our country,” saying she’s disgusted by the administration’s failure to locate the parents of 545 children who were taken from them when they tried to cross into the United States from Mexico. “It is inhumane,” she said.

Nettie Rosenow, a Biden supporter who employs immigrants at her 1,000-acre dairy farm outside of Trempealeau, is also upset by the family separations. “That’s got to be internationally illegal, and we get away with it? And nobody cares? What kind of country does that?” she said. Her hand-painted signs on the road that runs past the farm include one saying “545 Kids Separated And Not Reunited” and another saying “220,000 Deaths.”

Around the corner from Deutsch’s house in Trempealeau village, another Trump loather posted a lawn sign reading simply, “Literally Any Mentally Stable Adult.”

Phillip Bunton, a retired Air Force physician’s assistant, painted a sign saying “TrumPutin” and stuck it on his lawn on the main road into the village. It didn’t last long.

“I’m guessing someone drove by, took it off the lawn and threw it in their pickup truck,” he said.

Bunton made another one. This time, he climbed a ladder and bolted it to a tree.

Bunton, 66, is an independent who has voted for Republicans, including President George W. Bush, but he never trusted Trump. He’s suspicious of Russia’s influence and thinks the president aspires to be an autocrat like President Vladimir Putin.

The pandemic has hardened Bunton’s opinion. He said he was offended by Trump’s “constant hammering of the professionals who are doing a great job,” including Dr. Anthony Fauci, the country’s top infectious disease expert.

“I certainly think [Trump’s] ineptitude in dealing with the virus from the very beginning has caused greater effects,” he said. “He just doesn’t get it.”