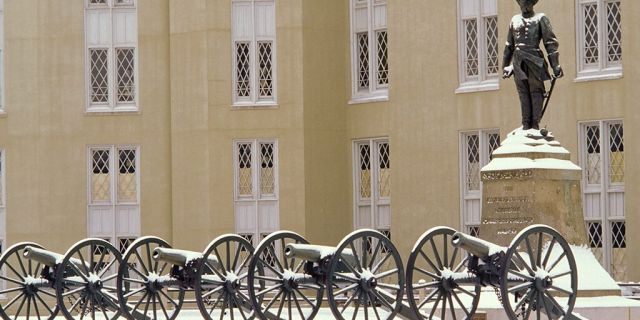 Virginia Military Institute is removing the statue of Thomas J. “Stonewall” Jackson from its campus and establishing diversity initiatives amid mounting allegations of racism at the public college.

The VMI Board of Visitors unanimously voted Thursday to move Jackson’s statue from the front of its barracks to another location that is yet to be determined.

The school is also appointing a permanent diversity officer and creating a diversity and inclusion committee.

Amid a nationwide racial reckoning, the school’s former superintendent said in June that they would not remove the statue of Jackson, a Confederate general and slave owner who was also a professor at VMI.

“We do not currently intend to remove any VMI statues or rename any VMI buildings,” Ret. Gen. J.H. Bindford Peay III, who resigned earlier this week, wrote in a letter to the campus community. “Rather, in the future we will emphasize recognition of leaders from the Institute’s second century.”

Kaleb Tucker, a Black graduate of VMI, started a petition earlier this year to tear down the statue of Jackson, alleging that racism is rampant at the school.

WHICH STATE HAS REMOVED THE MOST CONFEDERATE SYMBOLS DURING NATIONWIDE PROTESTS?

Earlier this month, The Washington Post published a report on the “relentless racism” faced by Black cadets.

During one incident in 2018, a White sophomore was suspended after telling a Black freshman that he would “lynch” him and use his “dead corpse as a punching bag,” according to the Post.

Keniya Lee, who graduated from VMI last year, made a complaint public in June, claiming that a business professor reminisced fondly on her father’s affiliation with the KKK in the middle of class.

The removal of Jackson’s statue and new commitments to diversity are meant to address these issues on campus.

“I am proud of the commitment by the VMI family to continue fulfilling our mission,” J. William “Bill” Boland, President of the Board of Visitors, said in a statement Thursday.

“VMI, like all aspects of society, must honestly address historical inequities and be intentional about creating a better future.  We care deeply about the individual experiences of all of our cadets and alumni. Our mission is just as important today, and tomorrow, as it has been for 181 years.”