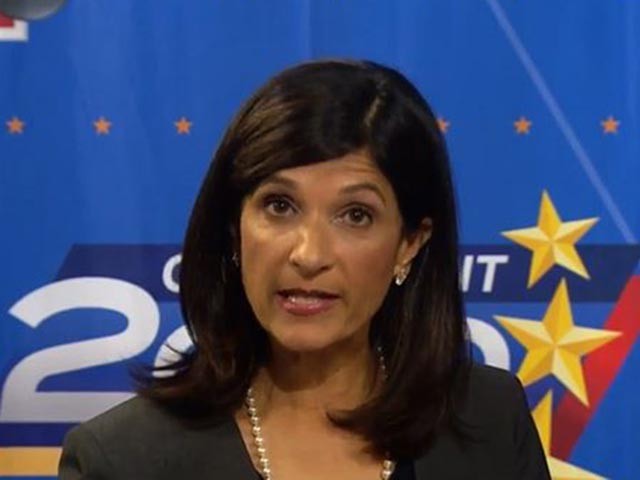 Maine Democrat House Speaker Sara Gideon, who is challenging Sen. Susan Collins (R-ME) in the race for U.S. Senate, refused to answer a debate question on Wednesday as to why she did not take further action at the time of learning one of her Democrat House members was accused of sexual misconduct.

Gideon learned of what she describes as “rumors” of sexual misconduct between former Rep. Dillon Bates (D-Westbrook), who was also a high school teacher, and one of the students at his school at least as early as spring 2018. Gideon questioned Bates about the allegations directly at that time, and Bates denied them. Then, on August 3, 2018, a local magazine called The Bollard made the allegations public, and Gideon asked Bates to resign as a lawmaker that day.

The speaker has not clarified what changed between the spring and August of 2018, aside from the allegations becoming public, that prompted her to ask for Bates’s resignation.

Gideon’s campaign has not responded to Breitbart News about the matter, but a Senate debate moderator Wednesday evening posed the same question to Gideon about her “inaction in response to an allegation of an inappropriate relationship between a then-state representative and a student back in 2018.”

“Why didn’t you push for an investigation as soon as you learned of the allegations? Why did you wait until the allegations became public?” the moderator asked.

National Republican Senatorial Committee spokesman Nathan Brand posted a clip of Gideon’s response, in which she does not answer the moderator and instead states, “Here are the facts: When there was an allegation that came forward, and it was anonymous still, I did immediately call on the state representative to resign”:

WOW! Democrat Sara Gideon pressed on why she did not investigate the alleged sexual predator in her caucus…

She refused to answer. Why? She did nothing because she needed his vote. #MEpolitics #MEsen pic.twitter.com/fsPSsTtA6n

Gideon then changes the topic to Collins and describes the questions about Gideon’s handling of the sexual misconduct allegations as “ironic” when Collins has “defended people like Brett Kavanaugh and President Donald Trump.”

Several individuals familiar with the matter have speculated on the need for Bates’s Democrat vote as a potential explanation for why Gideon, the Maine House’s highest-ranking member, did not take action against Bates sooner. The legislature in 2018 was extremely narrowly divided, meaning every Democrat vote was critical for Gideon to be able to pass legislation.

While praising her House majority leader, Gideon comments in the video taken October 2019:

One of the most amazing strengths that Erin [Herbig] brought to that job, besides being organized and committed and giving everybody in the caucus a voice, and also holding the caucus together because we had a three-seat margin, not even a majority, not even a majority, with Paul LePage as governor and a Republican-controlled Senate, and Erin Herbig as majority leader was the person responsible for making sure that everybody — not just that everybody showed up on a given day so that we didn’t lose votes when it counted — but in keeping people together. [emphasis added]

Again in an audio recording, Gideon expresses the same level of pressure she was under as a result of the House’s legislative makeup.

Former Rep. Paula Sutton (R-Warren) emphasized to Breitbart News the tightness of the Democrat caucus under Gideon, saying, “Democrats were told how to vote. If you don’t hold the party line, they primary a challenger against you in your next reelection and they don’t give you any money.”

Sutton and multiple other witnesses described one instance in which Gideon held open a vote on female genital mutilation, which Gideon was against banning at the state level, and personally pressured one member, Rep. Cathy Nadeau (D-Winslow) to change her vote, resulting in Nadeau leaving the House chamber crying. Nadeau did not respond to a request to confirm the incident.

Now just days away from the November 3 general election, Gideon has yet to provide justification for her decision to not filter the allegations against her Democrat member Bates through a formal channel, such as an Ethics Committee investigation, amid the suppositions that his necessary vote influenced how she managed the situation.

She maintains that because “there was nothing but a rumor” in the spring of 2018, there was nothing further she could have done aside from ask Bates herself about it. Gideon merely “took his word for it,” one of her Republican colleagues told Breitbart News.

Write to Ashley Oliver at aoliver@breitbart.com.