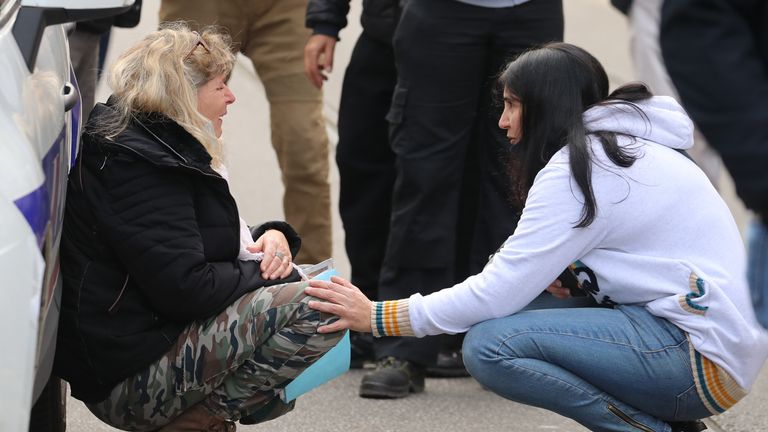 A woman has been decapitated in a suspected terror attack in Nice, French police say.

Three people have died and several others are injured after a knife attack took place near the Notre Dame church.

In a separate incident shortly after, French police confirmed a man was shot dead near Avignon, after threatening passers-by with a handgun in the district of Montfavet.

In Jeddah, Saudi Arabia, a man was arrested after stabbing and wounding a guard at the French consulate, state media reported.

“Everything suggests a terrorist attack,” he added.

He told reporters: “The suspected knife attacker was shot by police while being detained, he is on his way to hospital, he is alive.”

President Emmanuel Macron is due to visit Nice. French interior minister Gerald Darmanin said a police operation is under way and encouraged people to stay away from the area. He is holding a crisis meeting into the incident.

The nation raised the security alert for the French territory to the highest level in response to the attack.

Prime minister Jean Castex also told the French National Assembly that the government’s response to the attack would be firm and implacable.

The French anti-terrorist prosecutor’s department has been asked to investigate the incident. The assailant was believed to be acting alone and authorities are not looking for anyone else, an official said.

Mr Estrosi said two people were killed inside the church, one of which is believed to be the church warden, although this hasn’t been officially confirmed.

Words of support and condolence came from leaders and politicians across the world.

Boris Johnson said he was “appalled” to hear news of the attack.

“Our thoughts are with the victims and their families, and the UK stands steadfastly with France against terror and intolerance.”

Foreign Secretary Dominic Raab said: “The UK stands with France today in sorrow, shock and solidarity at the horrifying events in Nice.

“Our thoughts are with the victims and their families and we offer every support to the French people in pursuing those responsible for this appalling attack.”

The Vatican condemned the attack for sowing “death in a place of love and consolation, the house of the Lord.”

European Commission president Ursula von der Leyen said it was an “odious and brutal attack”, and the whole of Europe remained united and determined “in the face of barbarism and fanaticism”.

The Dutch prime minister Mark Rutte said: “In the fight against extremism you are not alone. The Netherlands stands beside you.”

In Paris, politicians in the National Assembly observed a minute’s silence in solidarity with the victims.

Reuters journalists at the scene in Nice said police armed with automatic weapons had put up a security cordon around the Notre Dame church, which is on Nice’s Jean Medecin avenue, the city’s main shopping thoroughfare.

Sounds of explosions could be heard as sappers detonated suspicious objects.

French politician Marine Le Pen also spoke of a decapitation having occurred in the attack.

Please use Chrome browser for a more accessible video player

It comes as the country is under high alert for terrorist attacks following the beheading earlier this month of French middle school teacher Samuel Paty in Paris.

The attacker had said he wanted to punish Mr Paty for showing pupils cartoons of the Prophet Mohammad in a civics lesson.

Those caricatures were published by satirical magazine Charlie Hebdo and cited by the men who gunned down the newspaper’s editorial meeting in 2015, killing 12.

It was not immediately clear what the motive was for the Nice attack, or if there was any connection to the incidents in Avignon or Jeddah; or to the cartoons, which Muslims consider to be blasphemous.

Mr Estrosi said the victims had been killed in a “horrible way”.

“The methods match, without doubt, those used against the brave teacher in Conflans Sainte Honorine, Samuel Paty.”

Please use Chrome browser for a more accessible video player


The French National Assembly in Paris held a minute’s silence for victims of the attack in Nice.

He added: “Attack in Nice, attack in Avignon, attack on the French consulate in Saudi Arabia. It is not a coincidence.”

Since Mr Paty’s killing, French officials – backed by many ordinary citizens – have re-asserted the right to display the cartoons, and the images have been widely displayed at marches in solidarity with the killed teacher.

That has prompted an outpouring of anger in parts of the Muslim world, with some governments accusing Macron of pursuing an anti-Islam agenda.

Commenting on Thursday’s attack the Russian government said it was unacceptable to kill people but also “unacceptable to insult religious believers.”

Two people were stabbed and wounded in Paris on 25 September this year near the former offices of the Charlie Hebdo.

A man originally from Pakistan was arrested over the attack.