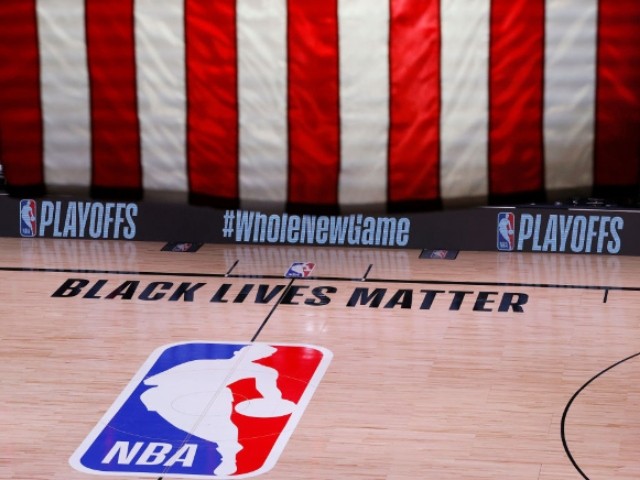 A new survey finds that the National Basketball Association is now seen more like a political organization pushing the Black Lives Matter agenda, with most saying they no longer think of the league as a sport.

The survey, conducted by Reality Check Insights and discussed recently in an interview with Outkick, finds that fans think of the NBA as a political organization that sometimes plays basketball.

“People are not even thinking about the NBA as a sport anymore,” Ben Leff, CEO of Reality Check Insights told Outkick. “They’re literally evaluating it as an overt political thing.”

The survey tends to show that the NBA made a huge mistake by going all-in for the Black Lives Matter political organization instead of merely pushing the generic message that racism is a bad thing.

Leff added that the NBA has a serious problem getting fans back to see it as a sport that supports certain political ideals instead of an all-out political organization, not to mention trying to regain its white audience.

“That might not even matter at this point,” Leff continued. “One option for them is to say, ‘We’re going to lean into this like we’ve been doing, and it’s totally fine if we don’t have a white Republican audience.’ I think they’re still trying to make this claim that they can be this sports league that appeals to everybody. I don’t think that’s sustainable.”

Leff’s poll was not a sports poll. The NBA question was included because the survey was looking into the Black Lives Matter theme. But it was clear that there was a partisan split over the NBA issue. The poll found that 67.1 percent of Democrats had a favorable opinion of the NBA, while 75.9 percent of Republicans had a negative view.

The survey also intermittently used photos of a basketball court as it appeared last year and an image from the 2020 season featuring Black Lives Matter signage all over it. The goal was to see if the photos swayed the opinions of the 1,400 respondents they surveyed. But it appears that the feeling that the NBA is too political was not impacted at all by the photos.

“It didn’t matter,” Leff said of the photos, “which means it’s fully incorporated, the politicization of the NBA.”

It should be noted that NBA commissioner Adam Silver seems to have realized that his league has gone off the rails. Earlier this month, Silver said that fans may see the constant politicking taking a back seat next year as the league tries to get back to sports. The question is, will it be too little, too late?