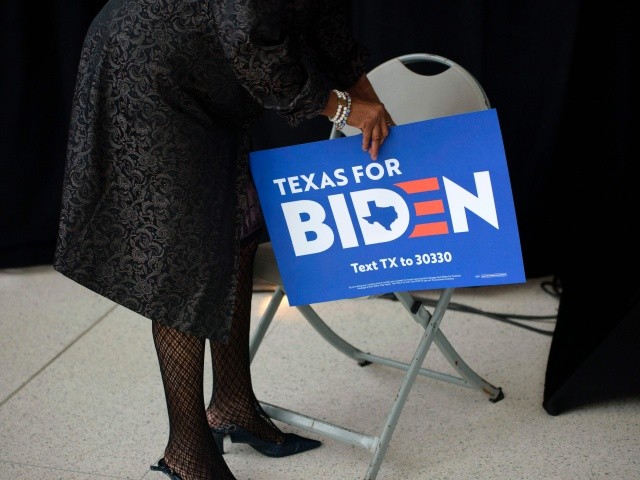 Democrat presidential candidate Joe Biden is eyeing Texas in his last week on the campaign trail as the Washington Post reports that Democrats see opportunity in the Lone Star state thanks to “demographic changes” that have secured Virginia and Colorado for them.

Democrats, according to the Post, are hopeful in Texas as Biden and his running mate, Sen. Kamala Harris (D-CA), make last-minute campaign stops in the state. Those hopes are almost exclusively reliant on the state’s “demographic changes” over the last three decades from immigration.

Many Texas Democrats had eyed 2024 as the year when what has been elusive for so long might just happen: their state’s growing, diversifying electorate would make them truly competitive statewide. [Emphasis added]

But that timeline seems to have sped up, spurred not just by demographic changes that have been underway for years but also by the repelling power of President Trump and the burst of liberal activism he has inspired. [Emphasis added]

Democrats are looking to replicate in Texas what they have accomplished in Virginia and Colorado — that is, relying on “altered” demographics via immigration to secure victories, according to the Post:

The same dynamic making Texas more competitive in the presidential contest and buoying the Democratic nominee in a U.S. Senate race is playing out in Arizona and Georgia, states long dominated by Republicans. It follows a similar Democratic rebirth in Virginia and Colorado that predated Trump; both are predictably blue now as newcomers have altered the states’ demographic makeup. North Carolina and, this year, even South Carolina have seen Democrats grow more competitive for the same reasons. [Emphasis added]

Texas, like Virginia and Colorado, has seen a drastic uptick in its foreign-born population over the last three decades. Every year, the U.S. gives green cards to about 1.2 million foreign nationals and admits another 1.4 million foreign workers on various visa programs. This is in addition to the hundreds of thousands of illegal aliens who enter the country annually.

The Washington Post, New York Times, the Atlantic, Axios, the Los Angeles Times, and the Wall Street Journal have all admitted that rapid demographic changes because of immigration are tilting the nation toward a permanent Democrat dominance.

“The single biggest threat to Republicans’ long-term viability is demographics,” Axios acknowledged last year. “The numbers simply do not lie … there’s not a single demographic megatrend that favors Republicans.”

In the upcoming 2020 election, about one-in-ten U.S. voters will have been born outside the country. Likewise, Hispanic Americans are set to outpace black Americans as the largest voting minority group in this year’s election.

Such realities have already been seen in the last presidential election.