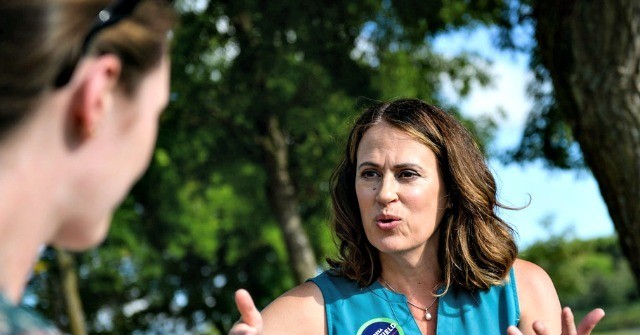 Neighbors of Theresa Greenfield criticized the Iowa Democrat on Thursday as too leftist and endorsed Sen. Joni Ernst (R-IA) instead.

Jenna Newell said she considers Ernst her “hero” and that the senator always votes for Iowans’ interests.

She added, “I’m extremely concerned that Theresa Greenfield is owned by the Democrats. She’ll never be able to vote any other way than they want her to”:

“We need to vote Joni back into office,” Nixon said:

Christine said, “I’m a neighbor of Theresa Greenfield, and I’m voting for Joni Ernst. I think Joni’s done a great job for Iowa. I support her 100 percent. I was rooting for her during the Amy Coney Barrett vote”:

Melissa Deatsch, an Ernst campaign spokesperson, said in a statement this week, “Theresa Greenfield has a record of dishonesty. From her last congressional campaign abruptly ending in felony election fraud to her current campaign receiving three Federal Election Commission complaints filed against them, it’s clear Greenfield cannot be trusted.”

She added, “Greenfield and her liberal allies will literally do anything to get ahead.”