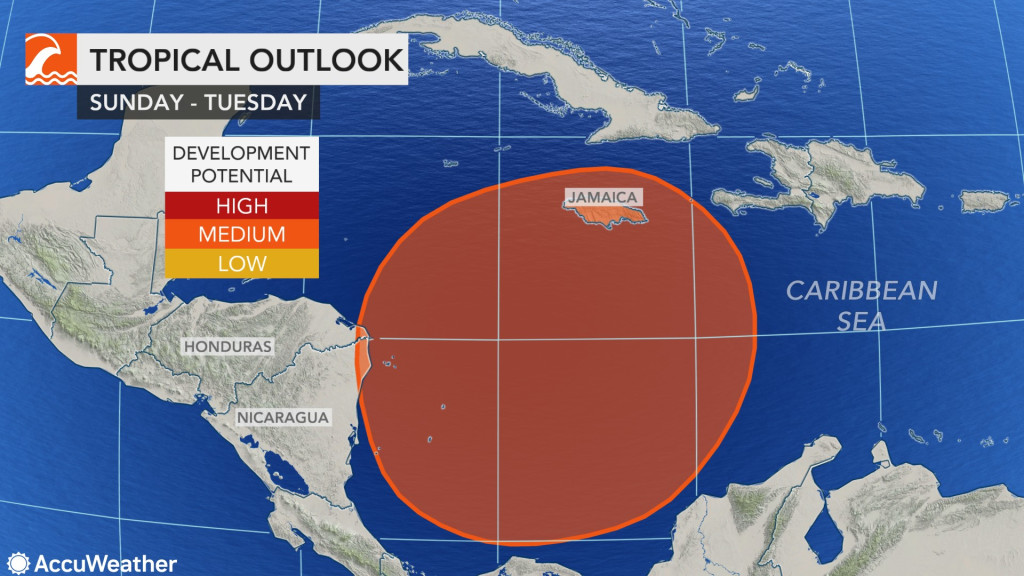 With Zeta hardly in the rearview mirror and officials and residents still assessing damage along the Gulf Coast and across the Southeast, forecasters are busy looking ahead to other dangers that may lurk in the basin. Nearly one month is left in the already record-setting 2020 Atlantic hurricane season, which officially ends on Nov. 30. Zeta was the 27th named tropical storm of the season — just one storm shy of 2005’s record of 28 systems in one year.

The National Hurricane Center has been ratcheting through the Greek alphabet — for only the second time in history — to name tropical systems once the designated list for 2020 was exhausted. 2005 was the only other year to use Greek letters, and Zeta was last on the list for that notorious season. The next storm to develop will be given the name Eta, a first for the Atlantic basin.

Roughly the same part of the Caribbean that spawned Zeta will be watched for potential tropical development from Sunday to Tuesday, according to AccuWeather Senior Meteorologist Rob Miller.

A tropical wave, marked by an area of showers and thunderstorms, was situated to the east of the Lesser Antilles on Thursday. The disturbance will move westward across the Caribbean this weekend, Miller explained.

As this weather system enters the western part of the Caribbean later this weekend to early next week, showers and thunderstorms associated with it may slowly become better organized, perhaps enough for the feature to strengthen into a tropical depression and storm.

This image, captured on Thursday, Oct. 29, 2020, shows a broad area of disturbed weather from near the Leeward and Windward Islands in the eastern Caribbean Sea to the central Atlantic. (CIRA at Colorado State/GOES-East)

“At this time, steering breezes are likely to guide this system into Central America during the middle part of next week,” Miller said.

To the north, stiff easterly winds will cause a zone of moderate wind shear across an area from the Gulf of Mexico to near the Bahamas. Wind shear is the increase in wind speed with altitude. It can not only cause tropical storms or hurricanes to weaken, but it can also limit tropical development in the first place.

The strong easterly wind could block or prevent a tropical system from moving northward through the middle part of next week. However, if easterly surface winds and wind shear were to weaken, then a system move could move northward and possibly become a threat to the U.S.

Beyond next week, AccuWeather meteorologists said there may be another area to watch for trouble in the Atlantic basin.

There is some indication that a broad area of disturbed weather may take shape somewhere from the central and eastern Caribbean to east of the Bahamas and south of Bermuda during the second week of November.

The development may occur as a tropical wave moves westward into the region. Another scenario that forecasters will monitor for is the potential for a storm in the middle levels of the atmosphere to spin down to the surface of the ocean, feed off of the warm water and eventually evolve into a tropical system. Epsilon formed in this manner during the middle of October.

Following Eta, the next tropical storm to form will be given the name Theta, which is the next letter in the Greek alphabet.

It is generally difficult for tropical systems to move westward or northward enough to reach the U.S. during November, due to prevailing west-to-northwest winds, but sometimes gaps in these conditions can occur at the wrong time and allow a tropical system to approach U.S. shores. Such was the case with Hurricane Zeta.

Keep checking back on AccuWeather.com and stay tuned to the AccuWeather Network on DirecTV, Frontier and Verizon Fios.