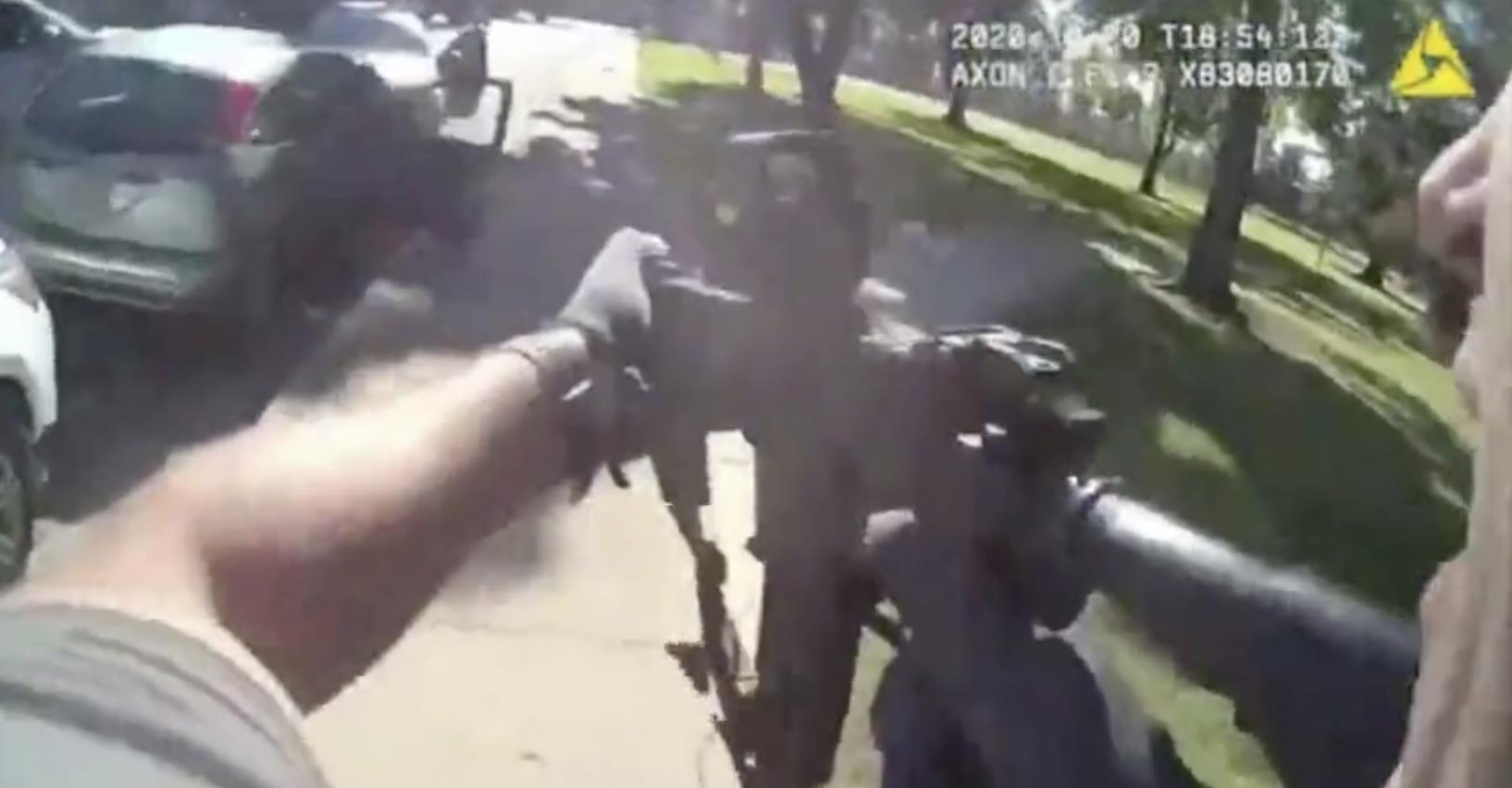 A Stockton man suspected in a double homicide in Modesto was holding the same gun used in the killing when he was shot by Modesto Police officers, Chief Galen Carroll said in a video released of the shooting on Wednesday.

David Cummings Jr., 27, was shot multiple times by four officers on Oct. 20 and remains hospitalized but is expected to survive.

The shooting occurred at Sherwood Park on West Robinhood Drive in Stockton when officers went there to arrest him for the murders of Brandon Wheeler, 40, and Emilia Natale, 29, and attempted murder of Jimmy Sullivan.

The three were shot outside Natale and Sullivan’s home on Semple street, near downtown Modesto, on Oct. 16, just after the suspect fired multiple rounds into a house three down from theirs.

“The victims were innocent bystanders who were shot as the suspect fled the area,” Carroll said in the video.

The video, produced by the department, includes statements by Carroll as well as body camera footage from multiple officers from both the scenes of the double homicide in Modesto and the officer-involved shooting in Stockton.

Before the detectives went to arrest Cummings they were aware of his violent criminal history and were told by witnesses he’d said that he had nothing to lose and would not go back to jail.

Cummings had recently been released from a 64-month term in prison for firearm and drug charges. In 2011 he was arrested on suspicion of shooting four people, one fatally, but was never prosecuted, Carroll said.

The body camera video from the officer-involved shooting starts with several officers inside a vehicle.

One of them is heard saying, “OK ready? deploy in three, two, one …,” then the vehicle rounds the corner on the park’s border and pulls up behind a silver car.

A flash bang is deployed, creating a loud explosion as a diversionary tactic, then Cummings can be seen getting out of the passenger side of the vehicle and running into the park.

The shooting occurs about five seconds later. Before that officers can be heard yelling commands. The video pauses immediately following the shooting so the viewer can see the gun dropped by Cummings.

Modesto Police Department spokeswoman Sharon Bear said Officers Jacob Mertz, Sean Martin, Joseph Lamantia and Sgt. Brian Binkley fired their weapons. Other officers were there who did not fire but she didn’t know how many.

The body camera video released of the shooting was from Lamantia’s perspective. He was holding a rifle but Bear said multiple types of firearms were used, all department approved and issued.

She referred to Stockton Police, who said they would not comment because it is an ongoing investigation.

Video from a different officer’s body camera showed the first aid officers provided Cummings after the shooting including a tourniquet applied above a bullet wound in his left leg and bandages to a gunshot wound to his chest.

Others officers can be heard saying “hold on, buddy” and “We’re here to help you.”

“Unlike Cummings and other violent criminals, the Modesto Police Department values human life,” Carroll said. “Immediately after the shooting, life saving measures were taken by the officers to ensure that Cummings could get to the hospital and eventually face the justice system for his crimes.”

Cummings faces two murder charges, and charges of attempted murder and shooting at an occupied dwelling.

The primary investigation into Tuesday’s shooting will fall to the Stockton Police Department. Other investigations will include the San Joaquin District Attorney’s Office and the state Department of Justice, which is protocol for officer-involved shootings in that county, according to Bear. Modesto police will review whether its officers followed department procedures.

According to use of force reports obtained by The Bee in response to a public records request last year, this was Lamantia’s fifth officer involved shooting and Martin’s second.