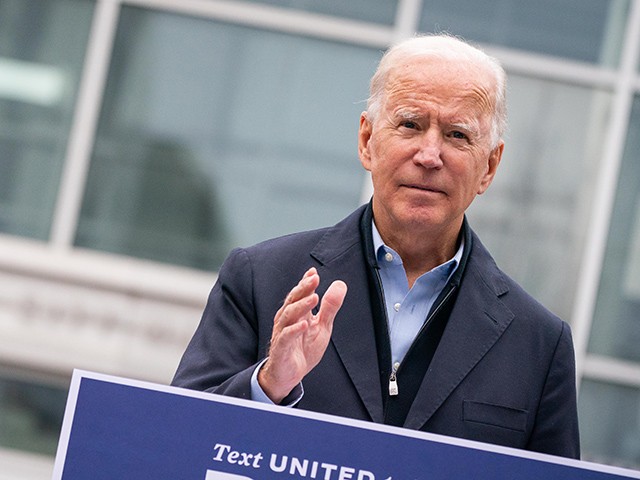 The allegations that former Vice President Joe Biden has spent years enriching himself through family ties, specifically his son Hunter and brother Jim, to the tune of millions of dollars in foreign money, especially from Ukraine, Russia, and China, are becoming increasingly credible as the days pass.

Navy veteran and former Hunter Biden business partner Tony Bobulinski is not in hiding, is not leaking, is not cloaked in anonymity. He has given us his name. His face. He is on the record with his allegation that Joe Biden was well aware of what Hunter was up to and benefited from it.

Bobulinski is not a third or second hand source. He’s not someone “familiar with the situation.” Bobulinski was there. He was Hunter’s business partner. He says he spoke directly to Joe Biden. This is not gossip. This is not hearsay. This is what’s known as witness testimony.

He also stated, “Hunter introduced me as, ‘this is Tony, dad, the individual I told you about that’s helping us with the business that we’re working on and the Chinese.’” And that it was “crystal clear” that Hunter Biden had told his father about his business dealings.

“I’ve seen Vice President Biden saying he never talked to Hunter about his business. I’ve seen firsthand that that’s not true, because it wasn’t just Hunter’s business, they said they were putting the Biden family name and its legacy on the line,” Bobulinski said.

Bobulinski is talking to the FBI. Telling the FBI what he has testified to publicly.

Lying to the FBI is a felony.

Bobulinski confirms that Joe Biden is the “Big Guy” named in numerous documents and has documents of his own that show “The Big Guy” getting a piece of the foreign money pie.

An email, dated May 13, 2017, included a discussion of “remuneration packages” for six people in a business deal with a now-bankrupt Chinese firm called CEFC China Energy Co. The email talks about how “Hunter has some office expectations he will elaborate.” This included an equity split where “the big guy” got ten percent.

Bobulinksi has produced this email and it was also found on the laptop everyone believes was once Hunter’s and left at a computer repair shop.

Joe Biden, Hunter Biden, and the Biden campaign are not disputing the credibility of the documents and emails. Nor are they saying Bobulinski is lying.

Instead, during the final days of a presidential campaign, Joe Biden has decided that rather than answer, explain, or dispute these credible allegations, he’s going to go into hiding.

This is called corroboration…

Cooney is in prison and has released his emails to Peter Schweizer, president of the Government Accountability Institute and senior contributor-at-large at Breitbart News. This is entirely different from the emails obtained by the New York Post from the laptop.

Newly obtained emails from a Hunter Biden business partner lay out in detail how the Vice President’s son and his colleagues used their access to the Obama-Biden administration to arrange private meetings for potential foreign clients and investors at the highest levels in the White House. These never-before-revealed emails outline how a delegation of Chinese investors and Communist Party officials managed to secure a private, off-the-books meeting with then-Vice President Joe Biden.

In a 2011 email, Hunter Biden’s business associates also discussed developing relations with what one called “China Inc.” as part of a “new push on soft diplomacy for the Chinese.” These emails are completely unconnected to the Hunter Biden emails being released by the New York Post.

If the corporate media could debunk these allegations, it would be the biggest story in the world right now. Since they cannot — even though you know they are aggressively trying to behind the scenes — they are ignoring the story and, without any evidence whatsoever, declaring it Russian lies, in the hope that will be enough to drag old Joe over the finish line.

On top of the documents and emails Bobulinski released to substantiate his claims about Joe Biden’s corruption, he also released audiotape of what he says is of a phone conversation with Rob Walker, a man who says he represents the Biden family. Here’s the transcript as it appeared on Tucker Carlson’s show this week:

BOBULINSKI: Trying to coach me.

BOBULINSKI: Trying to sort of say, hey, we don’t want to do that, we don’t want press trucks out in front of our house. I’m going to have to move, I could lose my job, and all of that — you know, I’m not trying to cause harm to anyone in this situation —

BOBULINSKI: — let alone Rob Walker and his family, James Gilliar and his family. But basically, Rob’s position was, if you go on record with all these facts, you’ll bury all of us.

Tony Bobulinski: “If he doesn’t come out on record I am providing the facts.”

CARLSON: What was your response to that?

BOBULINSKI: I was focused on pushing these guys to do the right thing, to demonstrate an ounce of integrity in front of the American people. They all know the facts; I lived the facts. And luckily for the American people, all the facts are extremely well documented.

Rob Walker has not denied that is his voice on the recording, nor has he claimed Fox News or Tucker Carlson or Tony Bobulinski took him out of context.

And Walker is something more than a Biden family representative… His wife, Betsy Massey Walker, is the “long-time White House personal assistant of Jill Biden, Joe Biden’s wife.”

From the emails we’ve seen, Walker had his fingers in all kinds of business dealings involving Hunter and Joe Biden.

Joe Biden claims he had nothing to do with Hunter’s business, and yet there are photographs of Biden meeting with Hunter’s shady business associates.

There is not a shred of evidence out there that in any way undermines the credibility of the emails, the voice mails, or Bobulinki’s testimony.

Watch Joe Biden brag about doing what President Donald Trump was falsely impeached for… Threatening to withhold U.S. aid from Ukraine unless Ukraine agrees to fires a prosecutor who was looking into Bursima, a shady energy company that paid Hunter $50,000 to $83,000 a month — a month! — even though Hunter has no experience in the energy sector. Oh, and here’s a photo of Joe Biden golfing with Hunter and Devon Archer, a member of Burisma’s board just two years before Joe blackmailed Ukraine into firing the prosecutor looking into Burisma.

So there you have it… Documents, texts, and emails that have not been disputed, on-the-record testimony, first-hand testimony, emails, multiple sources, corroboration, the risk of prison, audio recordings, photographs, videos, Joe Biden in hiding…