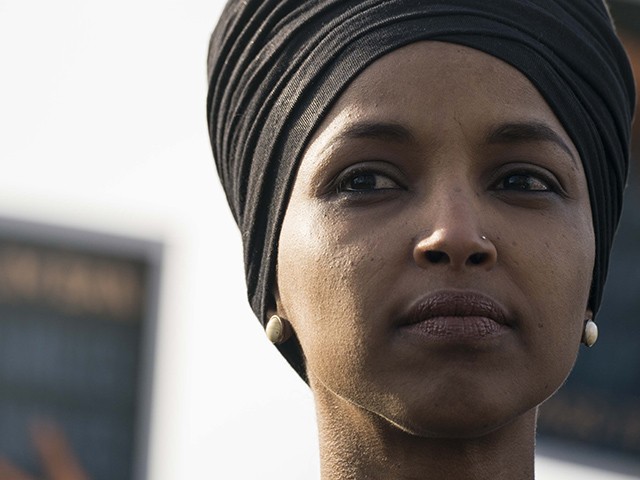 Rep. Ilhan Omar (D-MN) renewed her call for the complete removal of the Minneapolis Police Department, emphasizing the need to “disband,” “dismantle,” and completely “get rid of” it in a Tuesday interview with Teen Vogue.

“The need to disband and dismantle — get rid of — the Minneapolis Police Department comes out of a place of understanding that they don’t have credibility within our community,” Omar told the magazine, asserting that it is operating with “impunity.”

“They are not doing the core function of solving half of the homicides in our city. So if you are not functioning in the ways in which you are supposed to function, protecting and serving, and your function has become to brutalize and cause harm to our community, then you shouldn’t exist,” she continued.

In June, the Minneapolis City Council unanimously approved a pledge to disband the police and replace it with a community-led system.

“And when we’re done, we’re not simply gonna glue it back together. We are going to dramatically rethink how we approach public safety and emergency response. It’s really past due,” he added.

After taking steps to eventually abolish the police department, three council members received private security detail, costing the City of Minneapolis tens of thousands of dollars. While they cited threats, the police, at the time did not have any public reports of threats against the council members.

The defund police movement is not unique to progressives in Minneapolis. Left-wing agitators across the nation have seized on racial unrest and have demanded their respective city leaders to defund the police. All the while, many have inflicted carnage on their cities, supposedly in the name of racial justice.

Rioters have dominated Philadelphia in recent days following the fatal police shooting of a black man armed with a knife. Monday night’s riots resulted in at least 30 injured officers.

BREAKING: I was jumped by BLM rioters while they were looting more than a dozen stores,

Though in pain, I didn’t stop reporting because

Americans need to see what the corporate media refuses to show
pic.twitter.com/VI5hl8uV3C

“They [Biden and Harris] understand that protest is not un-American. This country was founded on protesting against injustice,” he said, praising Americans for “joining together to declare — in the face of injustice and brutality at the hands of the state — that Black Lives Matter no more but no less”:

He told supporters that they cannot abandon “all those young people who are out on the streets,” encouraging Democrats to “channel their activism into action.”