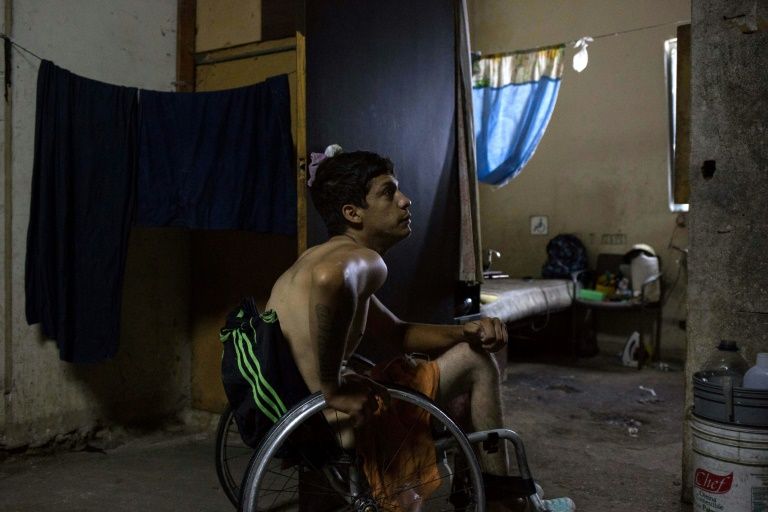 Sunlight cannot penetrate, the air is fetid and fellow residents include rats and cockroaches — but that’s how 14 families are “dying slowly” in government accommodation in Venezuela’s capital Caracas.

They live on the ground floor of a ministry building a stone’s throw from the Miraflores presidential palace.

“Here, we’re dying slowly. It’s shameful that humans” have to live this way, resident Johan Medina told AFP, as his skinny arms rested on the wheelchair he’s used since an accident seven years ago damaged his spine.

There are hundreds of families living in state-supplied shelters in crisis-wracked Venezuela.

Many lost their homes to flood damage, although six years of economic meltdown under President Nicolas Maduro has also left millions in abject poverty, while basic services have been paralyzed.

They’re hoping for state aid from the socialist government that boasts of having delivered three million homes since launching a massive housing plan in 2011 under the late president Hugo Chavez — figures disputed by the opposition.

At the entrance to the building that houses the women’s ministry, amongst other state institutions, there are pictures of Chavez and his successor Maduro.

Signs on the walls read: “No more Trump,” and “Vote Chavez.”

With no services such as running water, residents like Medina are particularly vulnerable to the coronavirus pandemic — but that’s the least of the 31-year-old’s worries.

“Why bother using a mask?” he said bitterly, pointing to filth and stagnant water around him.

It’s mandatory to wear face masks in the country of 30 million that has registered 86,000 cases and 736 deaths, according to official figures.

The first residents were brought to the ministry building by a socialist organization called the Popular Organized Anti-Corruption Interpellation that has an agreement allowing it to use state facilities for free.

The group, which did not reply to AFP requests for comment, organizes assemblies and then puts up participants that have come from afar for the night on mats.

At some point, “people started living” there after being told they would be rehoused, said Norelis, a 40-year-old teacher living with her daughter.

Conditions worsened, and now “it’s like a sewer;” but Norelis, who declined to give her surname, still hopes to be moved to “a dignified site.”

Government officials come and go in the 11-storey building constructed in 1956.

“They pass in front of your face all day long,” said Medina, who arrived five years ago after a friend told him he could get help there.

He was run over by a motorcycle in April 2013 just hours after voting in Maduro’s first presidential election.

With no alternative housing options materializing, Medina and Norelis fear they will be turned out onto the streets. Their accommodation was never meant to be permanent.

Lacking ventilation, the building can provoke respiratory problems amongst inhabitants.

“My daughter completely lost her sense of smell about a year ago,” Carla, who declined to give her full name, told AFP.

“We live in a room that was meant to be a bathroom. When the plumbing is flushed, imagine the smell,” added the agroecology expert, who currently works as a waitress.

She’s put up blinds and mosquito nets to try to keep out the cockroaches. She also has to deal with rats.

Carlos, who has lived in the shelter the longest, insists that everyone there is waiting to be rehoused as part of the “Housing Mission” launched almost a decade ago.

A strict curfew is imposed by authorities.