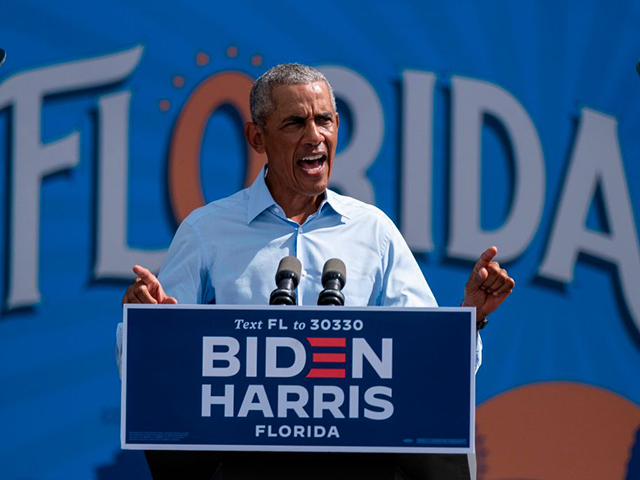 Former President Obama spoke on behalf of Joe Biden (D) at a drive-in rally in Orlando, Florida, on Tuesday and criticized President Trump’s leadership, telling supporters that Trump “screwed up” job growth and the response to the Chinese coronavirus pandemic.

Obama, who did not formally endorse Biden until after the Democrat primary race effectively ended, praised his former running mate as a man of character, telling attendees that Biden made him a better president.

Now, he and Sen. Kamala Harris (D-CA) are in the fight for “every single one of us,” Obama said before launching into a string of attacks against the president.

“Listen. You’ve got a president right now — he wants full credit for an economy that he inherited. He wants zero for the pandemic he ignored. But you know what? The job doesn’t work that way,” Obama said:

Obama suggested that Trump does not take the Wuhan virus seriously and told attendees that Biden is “not going to call scientists idiots” nor “host superspreader events at the White House and then take it on a tour all across the country” — two other digs at the president.

“Joe will get this pandemic under control,” he continued, promising free testing and vaccines.

Obama also attacked Trump over his handling of the economy, repeating the Democrat Party line that Trump inherited a strong economy and “screwed it up”:

Donald Trump likes to claim he built this economy, but I just want to remind you that America created 1.5 million more jobs in the last three years of the Obama-Biden administration than in the first three years of the Trump-Pence administration. That’s a fact. Look it up. And that was before Trump could blame the pandemic. He, in fact, inherited the longest streak of job growth in American history. But just like everything else he inherited, he screwed it up.

The former president also dismissed Trump’s accomplishments of historically low unemployment rates for minority communities, telling the crowd that it was already going down during his administration “and it kept on going down.” It soared back up, he said, because Trump “screwed up the pandemic response.”

“But it doesn’t have to be that way, Florida, if you go out and vote,” he told the crowd, adding that the only people who are “truly better off than they were our years ago are the billionaires who got Trump’s tax cuts.”

Biden and Harris, he added, “believe that no one, especially, the president is above the law.”

“They understand that protest is not un-American. This country was founded on protesting against injustice. And we don’t threaten to throw our political opponents in jail just because we disagree with them,” he continued, adding, “that’s what happens in dictatorships.”

A Gallup poll released earlier this month showed 56 percent of Americans indicating that they are better off than they were four years ago, as Obama ended his second term.

Trump responded to Obama’s speech on social media, remarking, “Now @FoxNews is playing Obama’s no crowd, fake speech for Biden, a man he could barely endorse because he couldn’t believe he won. Also, I PREPAID many Millions of Dollars in Taxes”:

Now @FoxNews is playing Obama’s no crowd, fake speech for Biden, a man he could barely endorse because he couldn’t believe he won. Also, I PREPAID many Millions of Dollars in Taxes.

While Obama’s crowd appeared smaller in scale to Trump’s rallies, he appeared to attract more supporters than Biden and Harris have at their respective events:

Honking for Biden: A large crowd of supporters are distanced and parked, ready for President Barack Obama. 44 is in Orlando, stumping for Biden/Harris. pic.twitter.com/XFewGZbxfZ