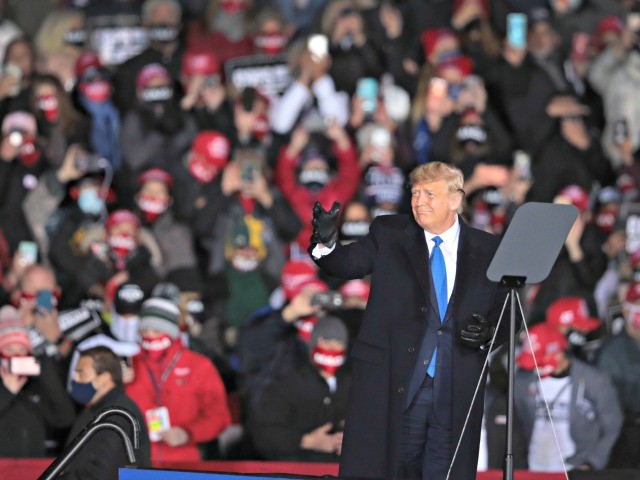 9:05 PM: Rally about to get started as Trump tries to defend an Electoral vote in Nebraska in addition to neighboring Iowa.

8:30 PM: Trump expected to deliver remarks at his third and final rally of the day at the top of the hour.

Live look from President Trump’s rally at Eppley Airfield in Omaha. The event starts at 7:30. Stay tuned to NCN for coverage. pic.twitter.com/hPVjkNyV3f

About 3 hours before President Trump is set to speak at Eppley Airfield, the screens are replaying Amy Coney Barrett’s speech after she was nominated for SCOTUS. pic.twitter.com/bJ1a9Eqny8

Crowd is filling in, as a replay of the Israel-United Arab Emirates peace agreement is playing. Somewhere, there’s a concession stand selling funnel cakes. pic.twitter.com/XjkpV9Oss6

7 days before Election Day President Donald Trump is set to come to Omaha to give his closing message, aiming for the district’s single electoral vote.

Crowd arriving three and a half hours before @realDonaldTrump scheduled to speak in Omaha #Nebraska pic.twitter.com/wZOsKOD4o1

Covid 19 rates are CLIMBING in Nebraska.

Yet @RepDonBacon is holding a massive rally TONIGHT
in Omaha with Donald Trump!

This is NOT what leadership looks like. This is completely reckless and irresponsible. https://t.co/NPPuepADh2

What’s on many people’s minds today in Wisconsin and Nebraska after Badgers phenom QB Mertz ruled out for three weeks along with two other QBs on the depth chart. Will the game even be be played?

BREAKING: Badgers QB Graham Mertz has reportedly tested positive for COVID-19 for a second time, meaning he would be out for the next three weeks. https://t.co/5bAjaiBPVG