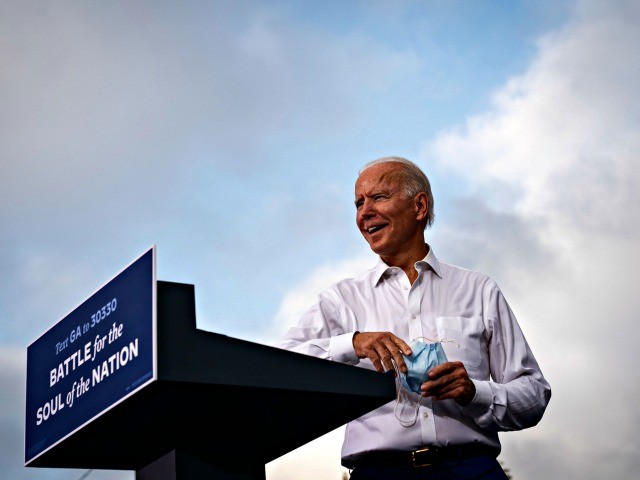 Joe Biden, the Democrat nominee, referred to himself as Sen. Kamala Harris’s (D-CA) “running mate” on Tuesday during a campaign swing through Georgia.

The former vice president, who has aroused concerns over his fitness for the White House in recent weeks, made the remark to a group of supporters at a drive-in rally in Atlanta when introducing himself to the crowd.

Biden, who, if elected, will be the oldest president ever inaugurated, often introduces himself in such a manner to voters. His decision to do so on Tuesday with Harris, the Democratic vice-presidential nominee, however, underscores the arguments that many on the right have made in recent months, principally that Biden is deliberately pitching the California lawmaker as the dominant player on their ticket.

The former vice president has indulged such speculation since tapping Harris as his running mate. In August, Biden told supporters the major reason Harris was picked for the ticket is that she is “ready to lead on day one.”

Harris, herself, has added to the confusion by pitching voters on the benefits that a “Harris administration” with Biden could have for them.

“As part of our Build Back Better agenda, we will need to make sure you have a president in the White House who actually sees you, who understands your needs, who understands the dignity of your work, and who has your back,” Harris told voters in Arizona in September.

“A Harris administration together with Joe Biden as the president of the United States, the Biden-Haris administration will provide access to 100 billion dollars in low-interest loans and investments for minority business owners,” she added.

Such remarks also complicate concerns that have arisen among voters over Biden’s fitness and stamina for the White House. Since jumping into the 2020 race last year, the former vice president has flummoxed even the most ardent of supporters with his frequent gaffes and misstatements.

Last month, a one-time White House stenographer, who worked exclusively with Biden during the Obama administration, told the Washington Free Beacon that the former vice president had deteriorated since leaving office.

“It is a complete difference from what he was in 2017,” the stenographer said. “He’s lost a step and he doesn’t seem to have the same mental acuity as he did four years ago.”

On Tuesday, shortly before the Democrat nominee spoke in Georgia, President Donald Trump suggested at a rally in Michigan that were Bident to win the presidency he would be removed from office via the 25th Amendment in favor of Harris.

“If he gets elected, three weeks into his presidency, they’ll say, ‘Kamala are you ready? Let’s go,’” Trump said.