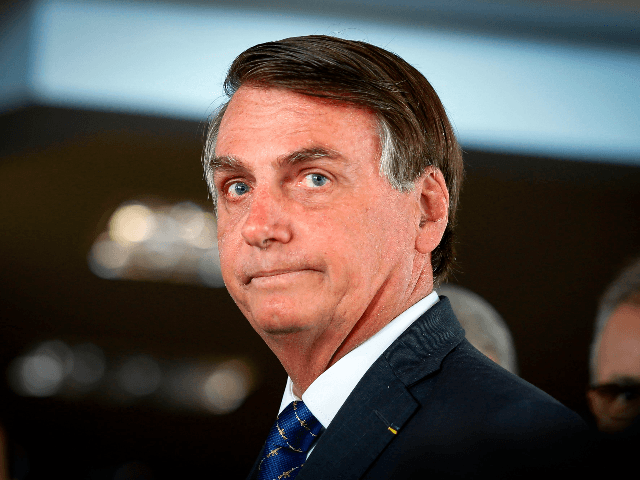 Brazilian President Jair Bolsonaro insisted on Monday that he would not allow the government to mandate any available coronavirus vaccine, stating that a judge “cannot decide if you are going to take a vaccine or not.”

Bolsonaro said he would meet with his health minister, Eduardo Pazuello, to handle the legal process around distributing vaccines, objecting that the matter of vaccination had been “judicialized” and that vaccines “are not a matter of justice, but a matter of health above all. A judge cannot decide if you are going to get a vaccine or not, that doesn’t exist.”

Bolsonaro’s comments on Monday echoed sentiments shared over the weekend, following his declarations on the Sinovac vaccine candidate specifically. Bolsonaro posted a message to his followers on social media Sunday reading, “Good night to all. Here, vaccines are only mandatory for Faisca.” The accompanying photo revealed that Faisca is a dog; faisca is the Portuguese word for “bolt.”

Brazilian law does allow the government to impose vaccinations. According to O Globo, Brazil’s Ministry of Health has mandated a specific vaccine schedule for all citizens from birth since 1973. That schedule lists vaccines that are common around the world and have been proven safe for decades, however, not experimental candidates like those currently in development for the Chinese coronavirus.

The newspaper noted also that Bolsonaro’s executive order on the Chinese coronavirus, signed in February, allows for mandatory vaccinations. It does not require Bolsonaro to mandate them, but gives him the power to do so if he chooses.

The debate over vaccines indicates that Bolsonaro is not keen to use that power, particularly in light of his very public disagreements with Doria, the governor of Sao Paulo. While Bolsonaro is allowing American pharmaceutical companies to conduct testing in Brazil, he adamantly rejected news of the Chinese vaccine candidate coming to the country after news reports revealed that Doria and Pazuello, the health minister, had agreed on a plan to buy 46 million doses of the Chinese vaccine candidate. Bolsonaro canceled the shipment, stating in a social media post, “the Brazilian people will not be anyone’s guinea pig.”

Doria insisted again on Monday that the Chinese vaccine candidate was on its way despite the president’s objections.

In response to Bolsonaro’s intervention, Brazil’s Supreme Federal Tribunal (STF), its top court, has also weighed in. The STF, run by judges appointed by prior socialist presidents, was the first to use the word “judicialization” to describe the process of vaccinating Brazilians.

STF President Luis Fux reportedly said that the process of vaccinating should go through a “judicialization” but implied that Brazil had time to figure it out.

“We want to find a solution for this case,” Fux said last week. “Based on what everything indicates, everyone says the vaccine that took the least time [to be developed] until now took four years. I don’t see why we should get ahead of it.”

Brazilian media reported on Tuesday that the STF may be considering an intermediary measure, one that does not criminalize rejecting a coronavirus vaccine but restricts the freedoms of those who opt against it. Citing anonymous court sources, O Globo reported that some suggestions on the table include making vaccines mandatory to travel out of state or allowing businesses to require vaccines for customers in places like bars and restaurants.

A poll released Tuesday found high rates of Brazilians interested in taking the vaccine that dwindled significantly when they were told the vaccine was of Chinese or Russian origin. According to the Research Center for Political Communication and Public Health at the University of Brasília, 78.1 percent of respondents said they had a “high” or “some” chance of taking the vaccine if asked only if they were interested in a coronavirus vaccine. O Globo noted that the study found the number dropping by 16.4 percent if told the vaccine is Chinese; 14.1 percent fewer people said they had some or a high chance of taking it if it was identified as Russian.

The poll also found that supporters of the Bolsonaro administration were much more likely not to accept a Chinese vaccine.

Brazil has one of the highest rates of coronavirus infection compared to other free states (rogue states like China and Russia have documented low rates that experts have questioned). At press time, Brazil has confirmed 5.4 million cases of coronavirus and 157,397 deaths attributed to the disease.