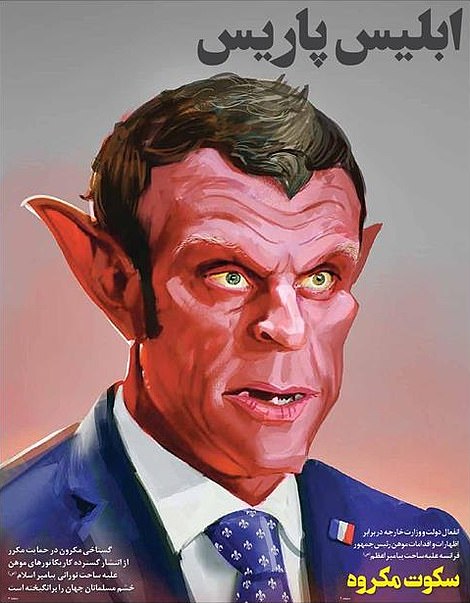 Emmanuel Macron has found himself demonised at protests throughout the Islamic world as anger grows at his defence of cartoons of the Prophet Mohammed.

Tens of thousands of demonstrators took to the streets of Bangladesh on Tuesday, branding him a ‘Satan-worshipper’ and burning him in effigy following smaller marches in Pakistan, Iraq, Turkey and Gaza on Monday.

Meanwhile hard-line Iranian newspaper Vatan-e Emrooz published a front-page cartoon of Macron as the Devil, branding him anti-Islamic and claiming that ‘French extremists’ had been seen burning copies of the Koran.

Iran also summoned the French ambassador on Tuesday in protest at Macron’s remarks, calling them ‘unwise’. Meanwhile Saudi Arabia put out a statement saying it ‘denounces the offensive cartoons of the prophet’.

Bangladeshis also added their voices to calls for a widespread boycott of French goods, with shops in Kuwait, Qatar, Jordan and Palestinian territories already pulling products including makeup and food from the shelves. 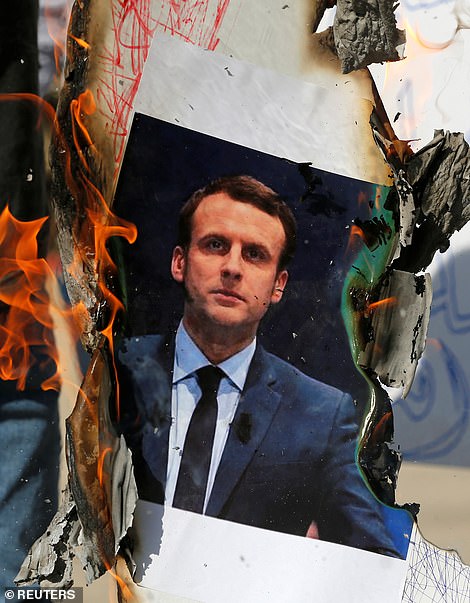 Emmanuel Macron has found himself demonised in Islamic countries as protests against his defence of Mohammed cartoons spreads. Hard-line Iranian newspaper Vatan-e Emrooz depicted him as a literal devil (left) while protesters burned images of him on the West Bank (right) 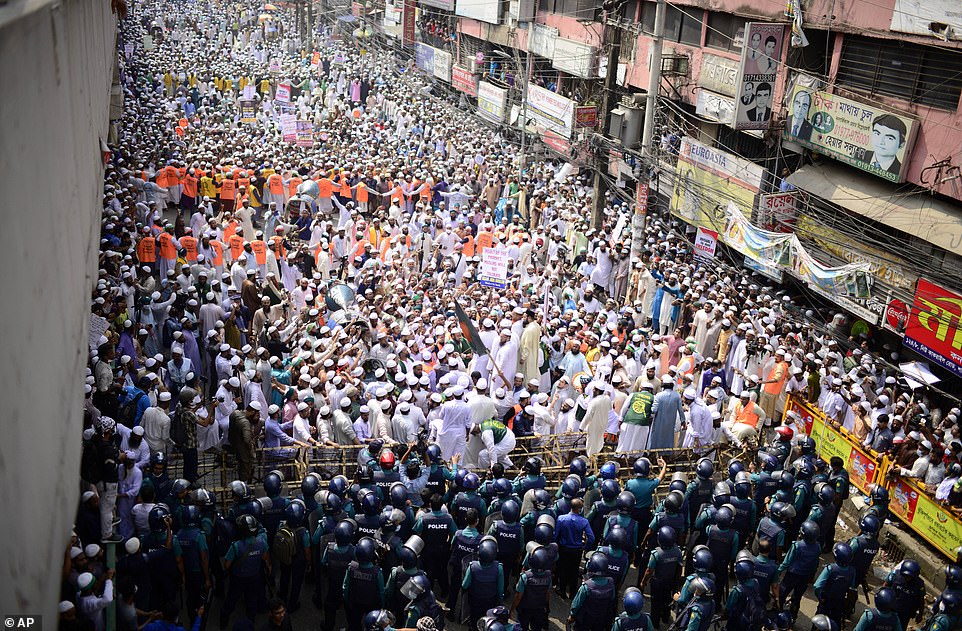 Tens of thousands of activists took to the streets of Dhaka, Bangladesh, on Tuesday in anger at Macron’s stance over the cartoons, and had to be blocked by police from reaching the French embassy 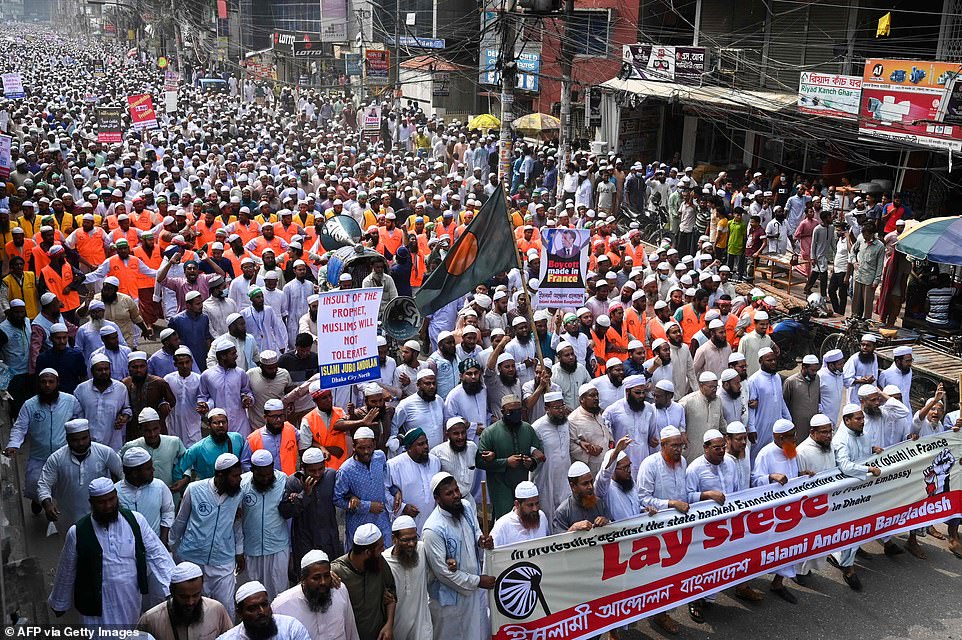 Protesters in Bangladesh branded Macron a ‘Satan-worshipper’, called for French products to be boycotted, and demanded that Macron be ‘punished’ for insulting the Prophet 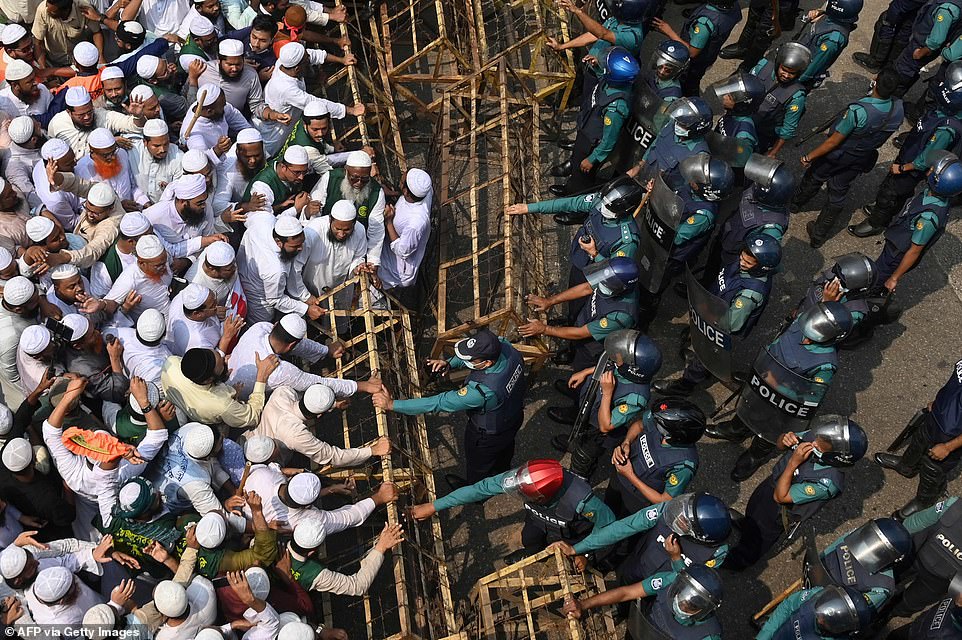 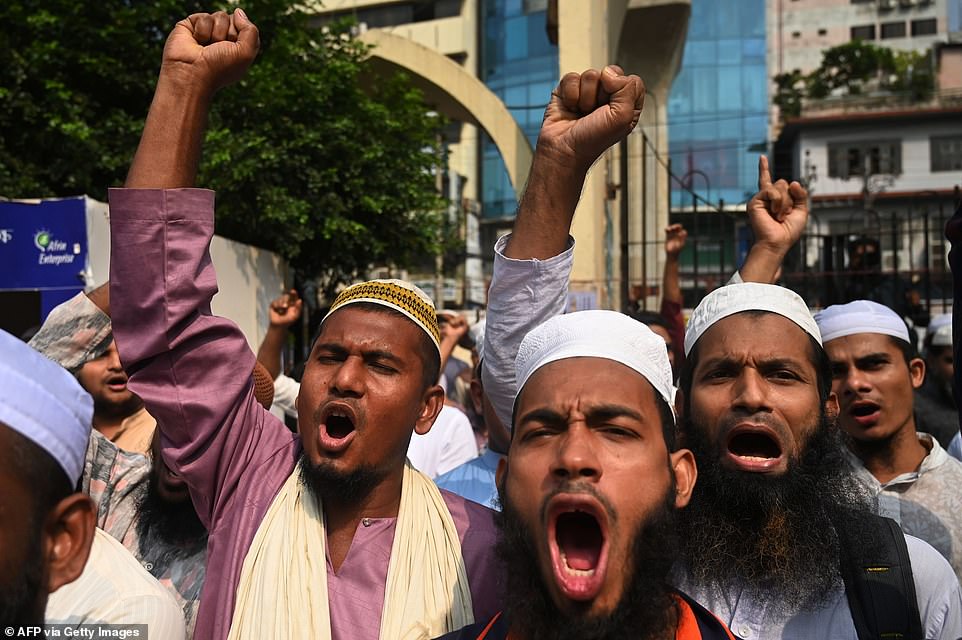 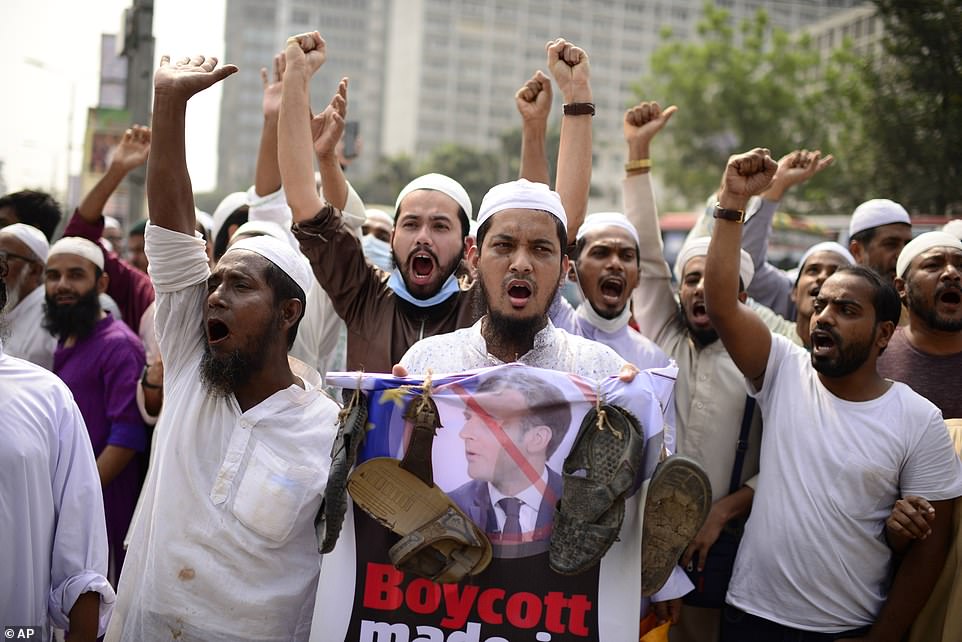 Protesters have been carrying images of Macron with shoes tied to them or a boot print across his face. Showing the sole of a shoe to someone is considered highly offensive in Islamic culture 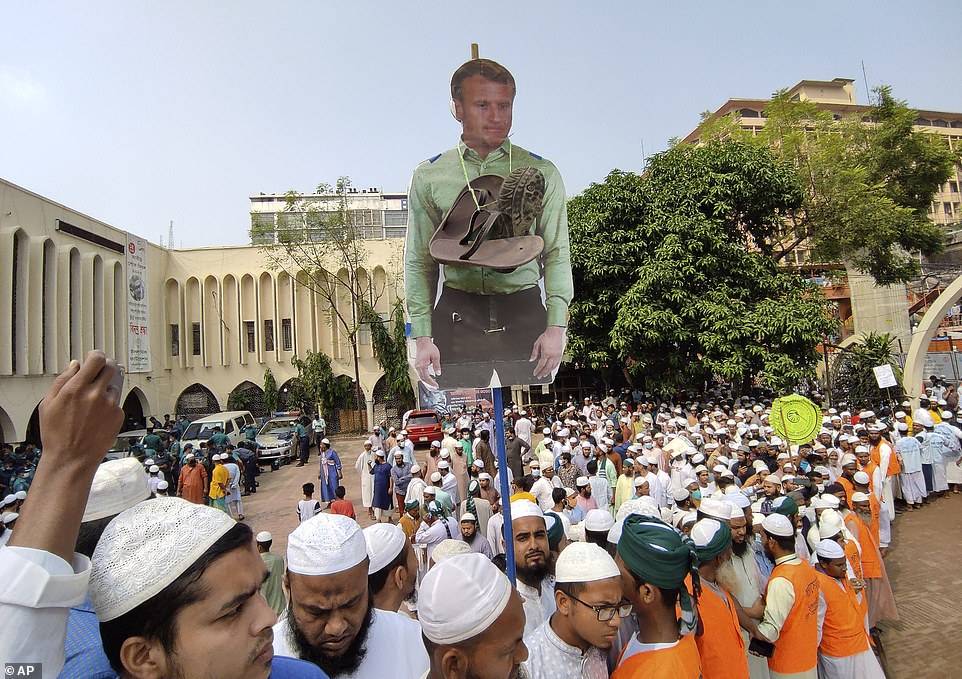 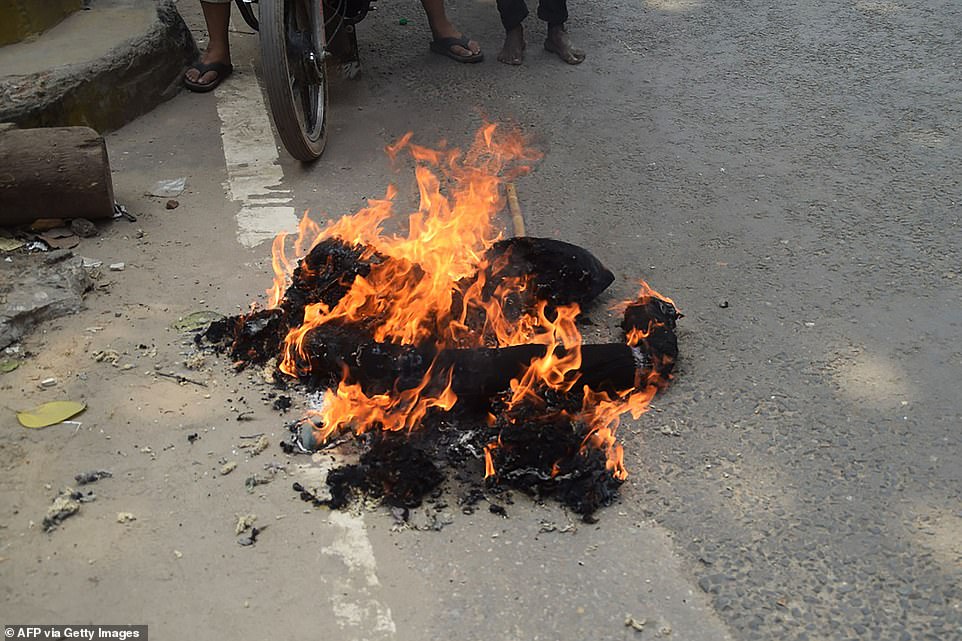 Activists later burned an effigy of Macron, while calling on him to be ‘punished’ for insulting the Prophet

Macron spoke out in defence of cartoons of the Prophet Mohammed following a terror attack in Paris, in which a teacher was beheaded for showing the caricatures to his class.

An 18-year-old Chechen is accused of carrying out the attack after a campaign against the teacher, started by parents whose children attend the school. Seven people have been arrested.

Amid the backlash, France has warned citizens living or travelling abroad to take extra security precautions amid fears they could be targeted.

The Foreign Ministry issued guidance to those in Turkey – whose President Erdogan has been among Macron’s leading critics – Indonesia, Bangladesh, Iraq and Mauritania, telling them to ‘exercise caution’.

The advisories said French citizens should stay away from any protests over the cartoons and avoid any public gatherings.

‘In this context, it is recommended to exercise the greatest vigilance, especially while travelling, and in places that are frequented by tourists or expatriate communities,’ the advisories stated.

A powerful association of clerics in the Iranian city of Qom also urged the government late Monday to condemn Macron for his remarks while calling on Islamic nations to impose political and economic sanctions on France.

In Saudi Arabia, the country’s state-run Saudi Press Agency put out a statement quoting an anonymous Foreign Ministry official saying that the kingdom ‘rejects any attempt to link Islam and terrorism, and denounces the offensive cartoons of the prophet.’

The agency did not immediately transmit the statement on its English or French services.

Already in the region, Kuwaiti stores pulled French yogurts and bottles of sparkling water from their shelves, Qatar University canceled a French culture week, and calls to stay away from the French-owned Carrefour grocery store chain were trending on social media in Saudi Arabia and the United Arab Emirates.

Protests have been held in Iraq, Turkey and the Gaza Strip, and Pakistan’s parliament passed a resolution condemning the publication of cartoons of the prophet. 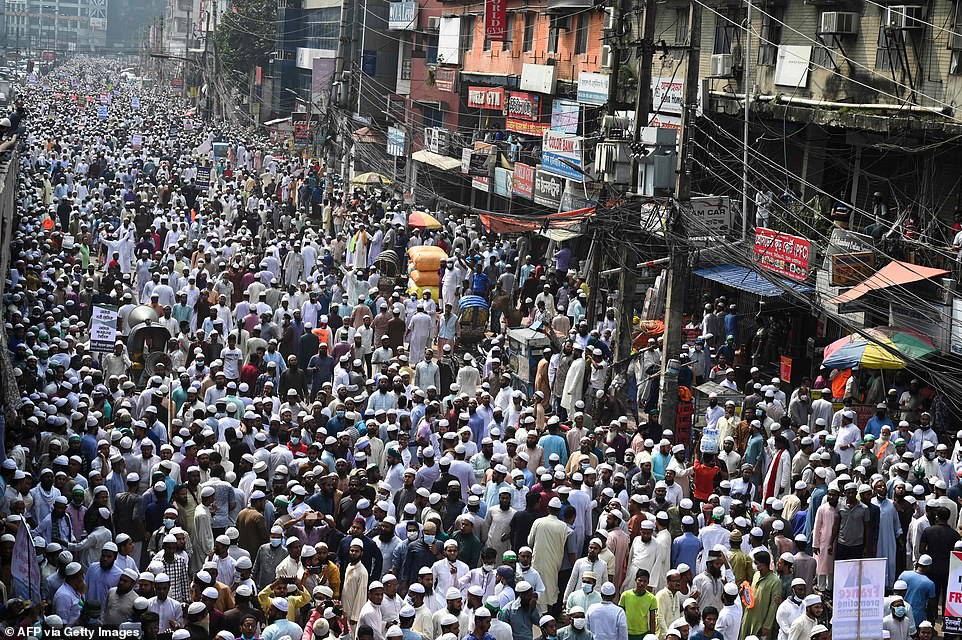 Activists and supporters of the Islami Andolon Bangladesh, a Islamist political party, hold a protest march calling for the boycott of French products and denouncing French president Emmanuel Macron 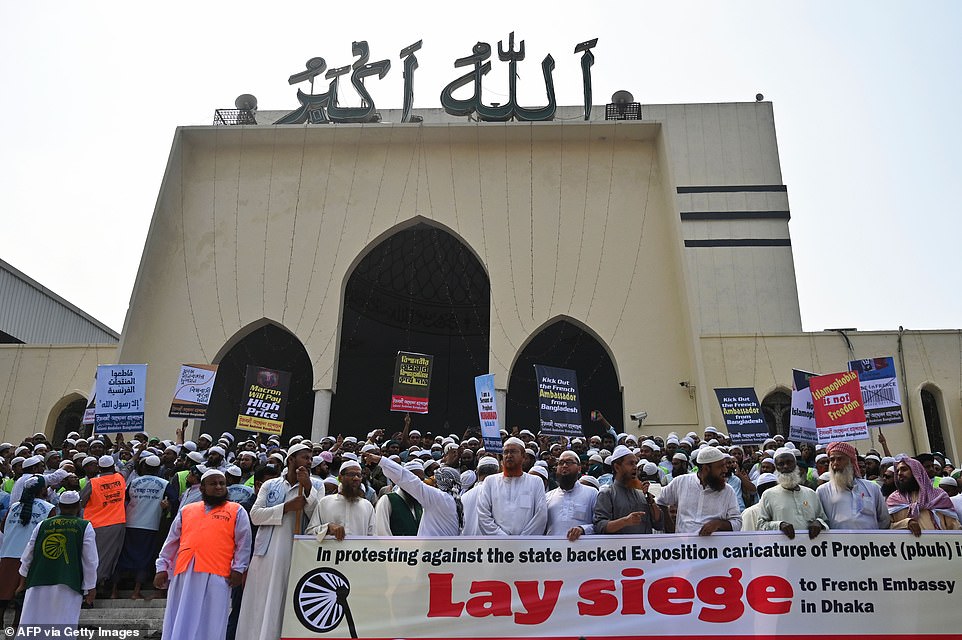 Speakers at Baitul Mukarram national mosque (pictured), Bangladesh’s largest, accused Macron of being ‘one of the few leaders who worship Satan’ 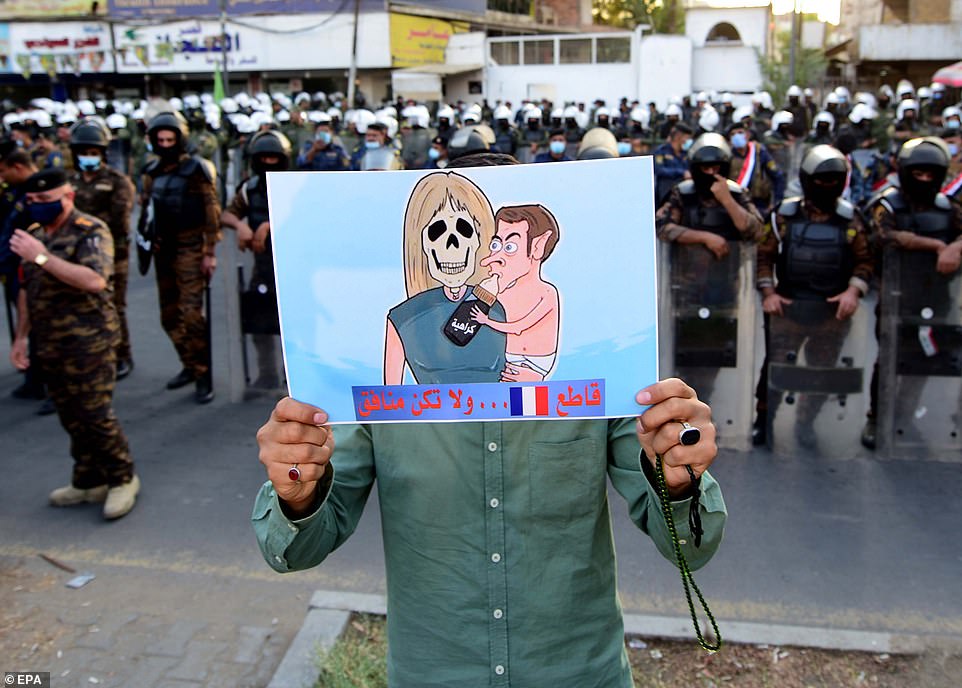 A protester in Iraq carries a portrait of Macron and his wife, denouncing the French President for disrespecting the Prophet 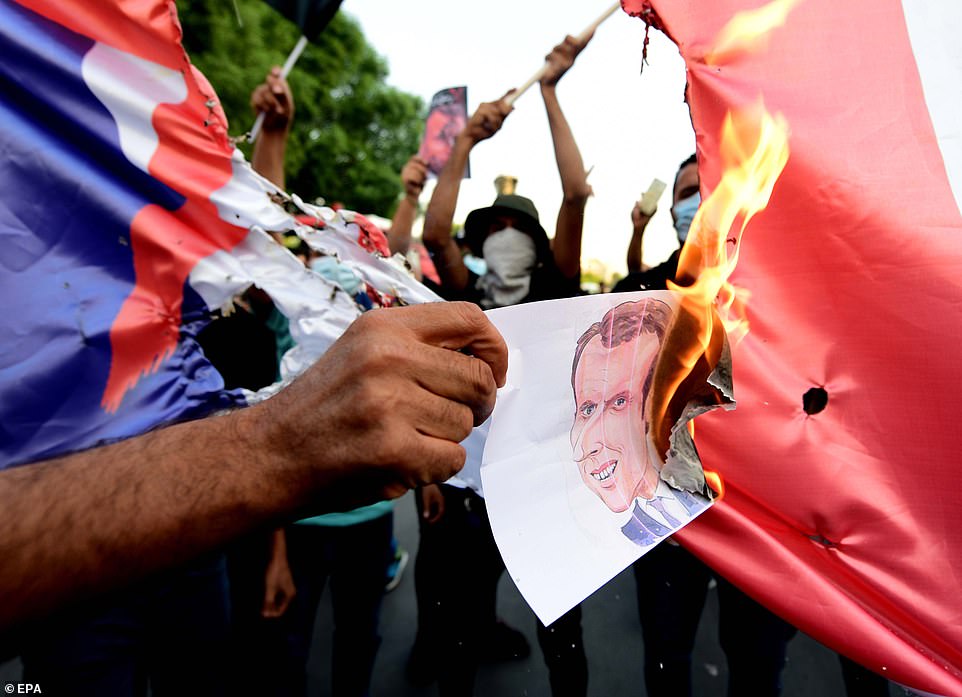 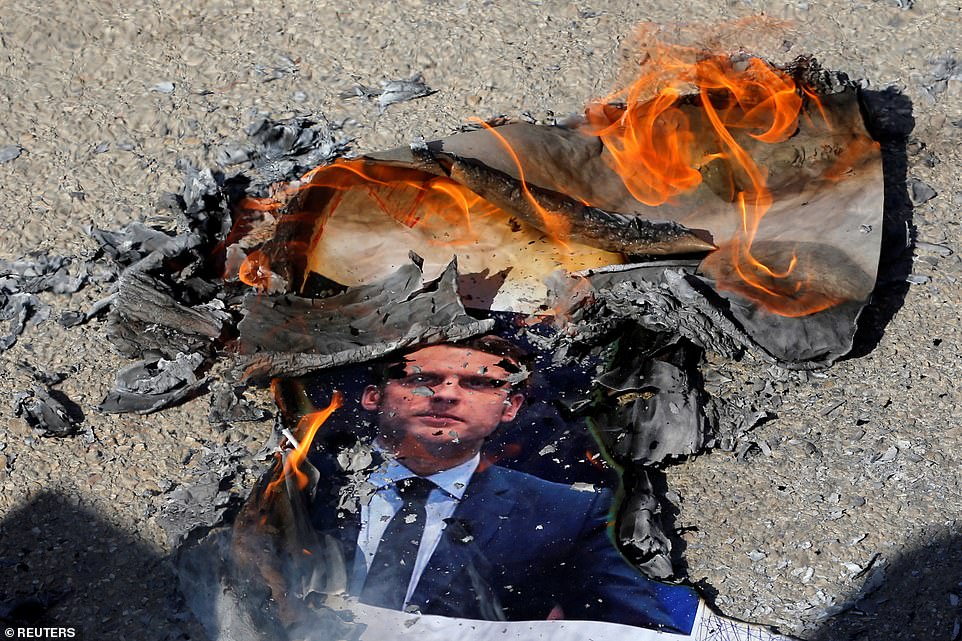 A picture of French President Emmanuel Macron is burnt by Palestinians during a protest against the publications of a cartoon of Prophet Mohammad near Hebron, on the West Bank 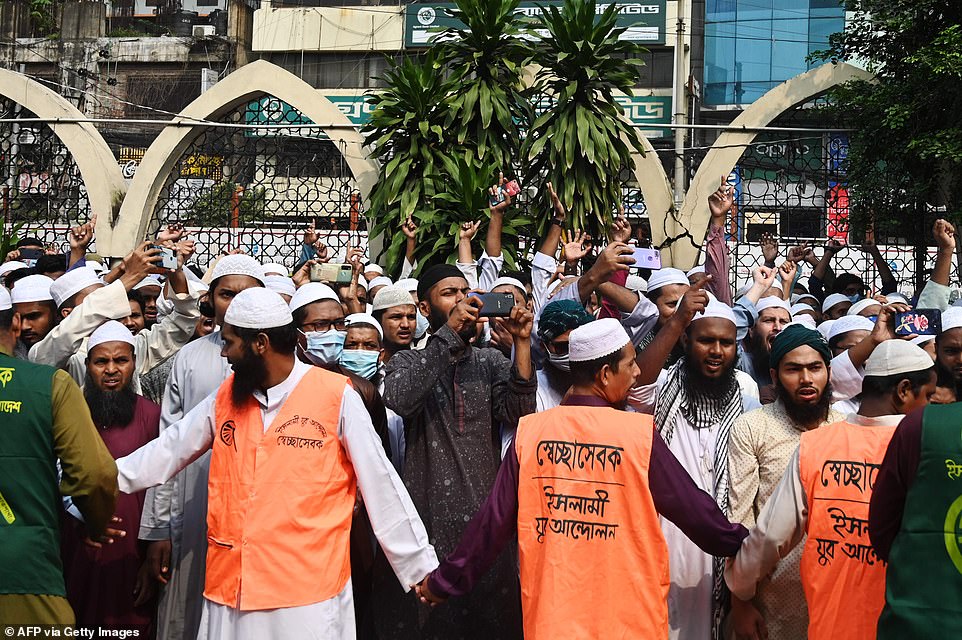 Protesters of the Islami Andolon Bangladesh, one of Bangladesh’s largest Islamist parties, hold a a protest march 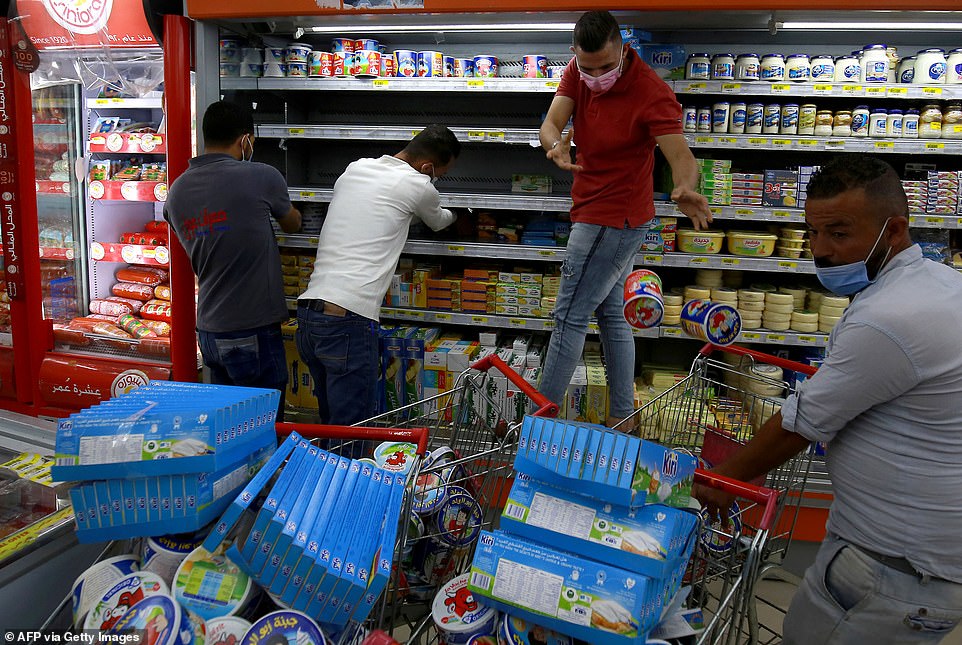 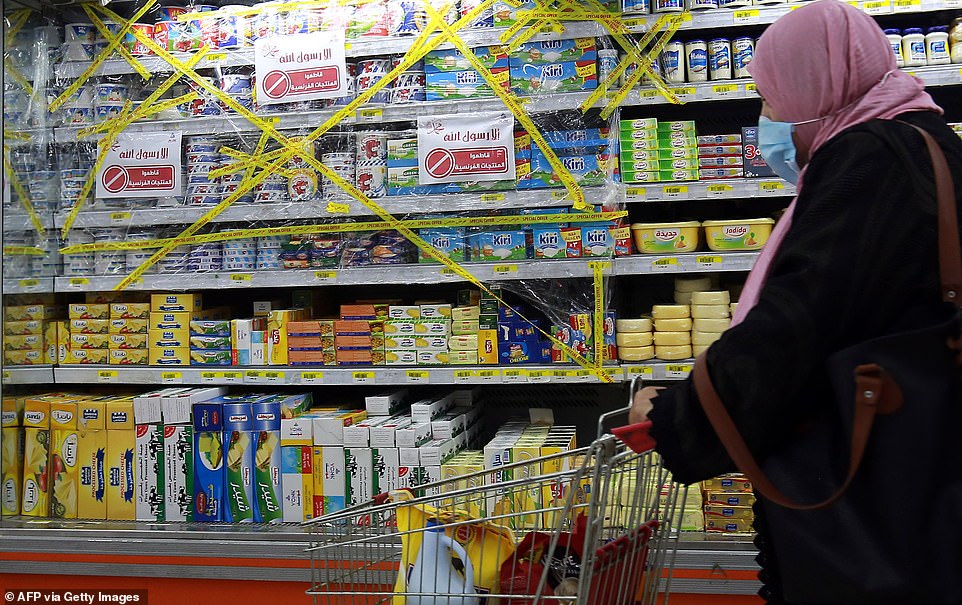 Meanwhile tens of thousands of people marched through the Bangladesh capital on Tuesday calling for a boycott of French products and burning an effigy of Macron.

Police estimated that more than 40,000 people took part in the march organised by an Islamist party which was halted before it could get close to the French embassy in Dhaka.

Hundreds of officers used a barbed-wire barricade to stop the protesters who broke up without violence.

The rally was organised by Islami Andolon Bangladesh (IAB), one of the country’s largest Islamist parties, and started at Bangladesh’s biggest mosque.

Protesters chanted ‘Boycott French products’ and called for Macron to be punished.

‘Macron is one of the few leaders who worship Satan,’ Ataur Rahman, a senior Islami Andolon told the rally at the Baitul Mukarram national mosque.

Rahman called on the Bangladesh government to ‘kick out’ the French ambassador while another leader, Hasan Jamal, said activists would ‘tear down every brick of that building’ if the envoy was not ordered out.

‘France is the enemy of Muslims. Those who represent them are also our enemies,’ said Nesar Uddin, a young leader of the group.

Even after the rally was halted, demonstrators marched down other streets chanting ‘Boycott France’ and ‘Macron will pay a high price’.

The French president’s comments on Islam have already led to a diplomatic showdown with Turkey. Macron said the school teacher ‘was killed because Islamists want our future’.

The UN’s High Commissioner for Human Rights Michelle Bachelet condemned the ‘horrific murder’ of teacher Samuel Paty on Tuesday, saying she ‘unequivocally condemns the murder of the school teacher in France.’