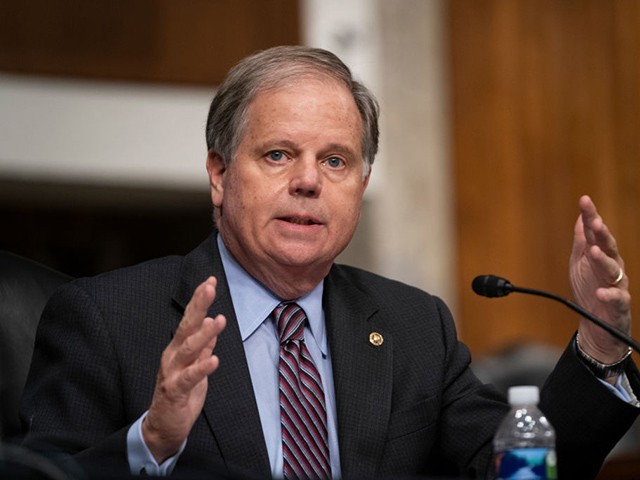 PolitiFact ruled the claim as “false,” and cited a question Jones answered on whether he supports “restrictions, if any” on abortion.

“Your question is essentially the state’s existing law, which allows for an abortion in the case of a medical emergency or a pregnancy caused by sexual assault, which I support. I oppose late-term abortions, which are extremely rare, except for instances of rape, incest, or when the life and health of the mother is in jeopardy.”

“He says he opposes ‘late-term’ abortions, except for instances of rape, or incest, or to save the mother’s life — the same exceptions as in the Hyde Amendment,” PolitiFact said. “We rate the claim False.”

But, that is not what Jones said. He specifically said he opposes “late-term abortions, which are extremely rare, except for instances of rape, incest, or when the life and health [emphasis added] of the mother is in jeopardy.”

Pro-abortion rights politicians often attempt to appear in favor of some restrictions on later term abortion by including the exception of the “health” of the mother.

Failed 2016 presidential candidate Hillary Clinton also said she favors a “late-pregnancy regulation” with “exceptions for the life and health of the mother.”

“Under Roe v. Wade, it is appropriate to say in these circumstances” that abortion rights may be restricted, Clinton said — “so long as there’s an exception for the life and health of the mother.”

But, Marjorie Dannenfelser, president of the pro-life Susan B. Anthony List wrote in 2016 at National Review that the notion of a woman’s “health” exception to late-term abortion “is a loophole so big as to make the underlying restriction meaningless.”

It applies to anyone who claims to feel “mental distress” at the thought of having a baby. And it’s hard to take seriously the idea that a woman who stood by as her husband vetoed a law to prohibit the gruesome practice of partial-birth abortion now opposes the very abortions the technique was designed to administer.

In an interview with AL.com in 2017, Jones, who represents a largely pro-life state, walked back his prior comments on abortion, in which he rejected any restrictions on abortion up until the baby’s day of birth. At the time of the interview, Jones said he wanted to “be clear” about his stance on abortion.

Jones told AL.com he was the victim of an “attack” since an MSNBC interview in which he said he becomes a “right-to-lifer” only after a baby is born.

“Those comments, everybody wants to attack you, so they are going to make out on those comments what they want to their political advantage,” Jones said, adding:

To be clear, I fully support a woman’s freedom to choose to what happens to her own body. That is an intensely, intensely personal decision that only she, in consultation with her god, her doctor, her partner or family, that’s her choice.

Having said that, the law for decades has been that late-term procedures are generally restricted except in the case of medical necessity. That’s what I support. I don’t see any changes in that. It is a personal decision.

I want to make sure that as we go forward, people have access to contraception, they have access to the abortion that they might need, if that’s what they choose to do. I think that that’s going to be an issue that we can work with and talk to people about from both sides of the aisle.

When Todd asked him if he would not support legislation that banned late-term abortions, Jones added:

I’m not in favor of anything that is going to infringe on a woman’s right and her freedom to choose. That’s just the position that I’ve had for many years. It’s a position I continue to have.

But when those people — I want to make sure that people understand that once a baby is born, I’m going to be there for that child. That’s where I become a right to lifer.

Alabama Right to Life called Jones’ record on life “reprehensible,” pointing out his vote in the U.S. Senate in January 2018 against banning late-term abortions after the fifth month of pregnancy:

Sixty votes were required to end the filibuster against the Pain-Capable Unborn Child Protection Act and advance the bill. The vote was 51-46 — with 44 Democrats including Jones voting no — and thus it failed to come to a vote.

In February, Jones was discovered on video responding to a question on how he would vote again on the Pain-Capable Unborn Child Protection Act.

Constituent: “Do you think abortion should be banned after 5 months?”

Doug Jones: “What a stupid question.”

In the video, when Jones saw the questioner, reported to be a constituent, he asked, “What stupid question do you have for me today?”

The constituent responded, “Do you think abortion should be banned after five months?”

“What a stupid question,” the senator repeated.

“You’re voting on it next week,” the constituent said.

“And I’ll vote on it next week, just like I did the last time,” Jones said, walking away.

As for Jones’ claim that late-term abortions are “extremely rare,” in 2016, the Centers for Disease Control and Prevention (CDC) reported nearly 13,000 fully developed babies who could survive outside the womb are aborted annually.

In addition, few of those abortions occurred because of the “life and health of the mother” or “something terrible” being discovered about the pregnancy.

Research published by the pro-abortion rights Guttmacher Institute found most late-term abortions were not performed for medical reasons — as the abortion lobby often states. Fetal abnormalities “make up a small minority” of late-term abortions, and those for saving the life of the mother are even less.

According to the study:

Most women seeking later abortion fit at least one of five profiles: They were raising children alone, were depressed or using illicit substances, were in conflict with a male partner or experiencing domestic violence, had trouble deciding and then had access problems, or were young and nulliparous [never given birth].

As early as 1997, a report at the Los Angeles Times featured Ron Fitzsimmons, former executive director of the National Coalition of Abortion Providers, who admitted partial birth abortions were not that rare.

“The abortion rights folks know it, the anti-abortion folks know it and so, probably, does everyone else,” Fitzsimmons said, adding that he “lied through [his] teeth” during a Nightline interview when he said partial-birth abortions were rarely performed and only due to fetal anomalies and serious health risks to the mother.