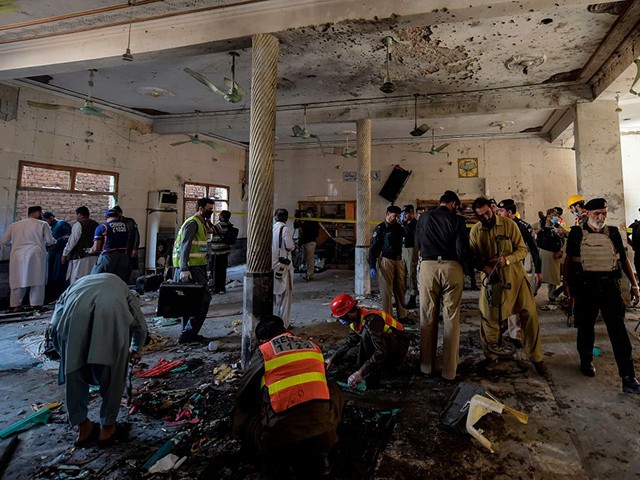 Hospital officials confirmed the deaths of least eight people and 110 injured at press time in a Tuesday morning bomb attack on a Quran study class in Peshawar, Pakistan.

The bomb targeted a madrassa, an Islamic seminary, in the northwestern city.

The explosion came as a prominent Islamic scholar delivered a lecture on Islamic theology in the Jamia Zuberia madrassa’s main hall. Police say at least five kilograms of explosive material caused the blast.

Waqar Azim, a local police official, told Agence France-Presse (AFP) that “the blast took place in a seminary during a Koran class. Someone took a bag inside the seminary.” The person who left the bag — which presumably contained the explosive — left the building prior to the explosion, Azim asserted.

The explosion devastated the building’s interior and severely damaged the roofing as well.

No individual or group has yet claimed responsibility for the bombing.

Pakistan’s Islamist Prime Minister Imran Khan posted a statement of his condolences on Twitter and vowed to apprehend those responsible for the bombing.

“Deeply saddened by terrorist attack on madrassah in Peshawar. My condolences go to the victims families & prayers for early recovery of the injured,” he said. “I want to assure my nation we will ensure the terrorists responsible for this cowardly barbaric attack are brought to justice asap.”

Deeply saddened by terrorist attack on madrassah in Peshawar. My condolences go to the victims families & prayers for early recovery of the injured. I want to assure my nation we will ensure the terrorists responsible for this cowardly barbaric attack are brought to justice asap

Peshawar, the capital of Pakistan’s Khyber Pakhtunkhwa province that borders Afghanistan, has suffered many attacks by jihadists over the years. In 2014, for example, Pakistani Taliban jihadists targeted a Peshawar school in an attack that killed more than 150 people, including many children.

A series of military operations on the border had recently reduced the violence.

This latest attack comes as the Afghan Taliban, which has operated in the country as part of its campaign against the United States and Afghanistan, pursues peace talks to end the fighting in Pakistan’s northern neighbor.

Negotiators for the Taliban and the U.S.-backed Islamic Republic of Afghanistan have been working in Qatar to hammer out a long-term peace plan which the Taliban hopes will restore full Islamic law to the country and guarantee its leaders a position of power in a post-war arrangement.

A Pakistani court on Saturday convicted a Muslim professor of blasphemy, sentencing him to death for allegedly spreading anti-Islamic ideas. https://t.co/i9VtOiw441

The group seeks “a government in which the Holy Quran is ruling, the hadith of the messenger (Muhammad) is ruling, the Hanafi school is there, and the occupation is over,” according to a Taliban negotiator involved in the Qatar peace talks.

Despite the attempts at peace, the Taliban have dramatically escalated their attacks on Afghan government positions while not attacking U.S. targets in anticipation of a large-scale withdrawal under President Donald Trump.