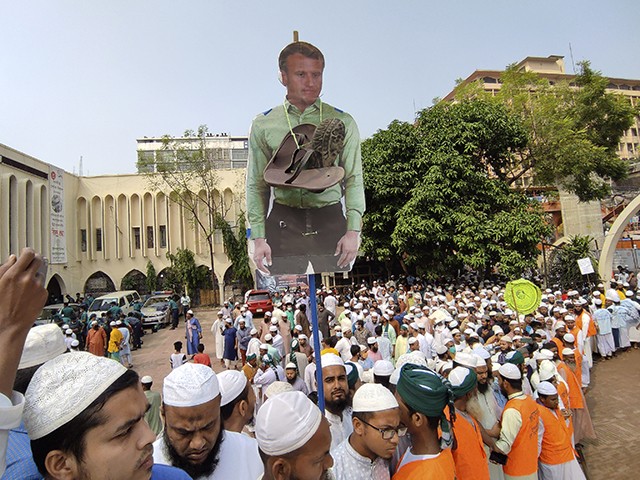 An estimated 40,000 people attended a rally in Dhaka, Bangladesh, on Tuesday calling for a nationwide boycott of France and government policies meant to hurt the European nation in response to President Emmanuel Macron launching a campaign against radical Islamists.

Macron has begun the process of shutting down jihadist groups and arresting radical Islamists in the aftermath of the murder of Samuel Paty, a schoolteacher, for showing his students satirical cartoons of Muhammad by the French magazine Charlie Hebdo. Macron has refused to apologize for the cartoons, as many in the Islamic world have demanded, instead announcing France would not yield to violence or intimidation in attempts to curtail free speech. The French government also held a national tribute to Paty, which many in the Islamic world considered an insult given Paty’s status as an infidel.

The mob, which police estimated to include 40,000 men, burned Macron in effigy in addition to making their calls to boycott France. The event threatened to become violent when the mob made an attempt to storm the French embassy in Dhaka, obstructed by hundreds of police officers, who surrounded the embassy with barbed wire, reports indicated. Police have yet to report any violent incidents at press time.

“At the rally, the party’s emir Pir Syed Mohammad Rezaul Karim of Charmonai demanded the government adopt a motion of condemnation against France in the National Assembly,” newspaper Prothom Alo reported.

Kaler Kantho, another Bangladeshi newspaper, reported that Islamic leaders were quick to demand the mob move away from the embassy upon noting the extensive police presence.

“At a brief rally, Syed Mohammad Rezaul Karim, emir of the Islamic Movement of Bangladesh and Pir Mufti of Charmonai, said that the French government had hurt the hearts of the Muslim Ummah by displaying caricatures of Muhammad (PBUH) under state police guard,” the newspaper relayed. Karim also reportedly condemned the United nations for having “failed to protect the interests of Muslims” by acting against French cartoonists, demanding unspecified “strong action.”

“Macron is one of the few leaders who worship Satan,” Ataur Rahman, a senior leader of the Islamic Movement party, reportedly said at the rally, according to the Iranian state propaganda outlet PressTV.

“France is the enemy of Muslims. Those who represent them are also our enemies,” Nesar Uddin, another party official, added.

PressTV also quoted a member of the party threatening to “tear down every brick” of the French embassy and demanding that Dhaka expel the French ambassador.

Prothom Alo reported that the rally on Tuesday was the launch of a “three-day program” against France that would continue on October 29 with another planned march. The next day, the party organized a “procession led by imams and khatibs from all mosques.”

The third event is reportedly scheduled for mid-November and dubbed an “anti-idol rally.”

These events are only those planned by the Islamic Movement. Other Islamist groups have also reportedly begun to plan events, such as Muslim college student groups who were reportedly present in smaller numbers in Dhaka on Tuesday.

Samuel Paty was a teacher in Conflans-Sainte-Honorine, a suburb of Paris, who reportedly showed students cartoons of Muhammad from Charlie Hebdo during a class on “moral and civil education.” Paty reportedly warned students before showing them and allowed Muslim students to leave if they felt the cartoons would offend them. Despite this, enraged Muslim parents reportedly began a campaign against Paty, led by one parent, Brahim Chninam, who recorded a video that went viral demanding a “fatwa” on Paty. Police believe the video led to 18-year-old Abdoulakh Anzorov, a Muslim immigrant, beheading Paty. Macron’s government has since shut down the mosque where the video began circulating.

Police have also arrested over 80 people for publicly supporting the murder. Anzorov died in an exchange with police following the beheading.

“One of our countrymen was assassinated because he was teaching, because he was teaching his students about the freedom of expression, the freedom to believe or not believe,” Macron said following the incident. “It’s not a coincidence if tonight a teacher was struck, because the terrorist wanted to attack the values of the public, its light, the possibility to make our children, no matter where they come from, no matter what they believe or not believe, no matter what their religion is, to make them free citizens.”

Macron’s refusal to apologize for the cartoons and public statements and events honoring Paty have outraged multiple authoritarian Islamic regimes, including those of Turkey, Pakistan, and Iran. He appears to have the support of the French people, however, who last week projected building-sized versions of the offending Charlie Hebdo cartoons onto a government site in the Occitanie region.

“There must be no weakness in the face of the enemies of democracy, facing those who transform religion into a weapon of war… those who intend to destroy the Republic,” Regional Mayor Carole Delga said of the display.