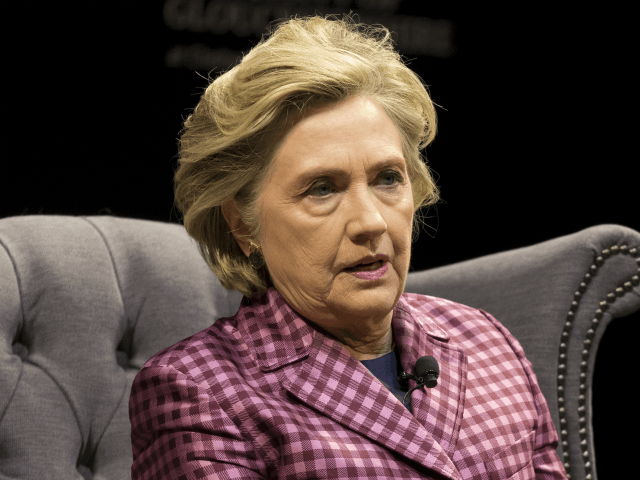 Former secretary of state and Democrat presidential nominee Hillary Clinton said during an interview Monday with journalist Kara Swisher, “It literally makes me sick to my stomach” to think that President Donald Trump may be reelected in November.

“I can’t entertain the idea of him winning, so let’s just preface it by that,” Clinton said during the podcast, which is part of the New York Times Opinion network.

“Well, because it makes me literally sick to my stomach to think that we’d have four more years of this abuse and destruction of our institutions, and damaging of our norms and our values, and lessening of our leadership, and the list goes on.”

Asked if she felt any “fear” that President Trump would target her legally should he be reelected, Clinton said, “There’s no doubt that he would do everything he could to attack and punish anyone who was, in his view, an adversary.”

“And he would be aided and abetted, sadly, by both elected and appointed officials,” she continued. “So, of course, one of the most important accomplishments that I hope we see in this election is a Democratic Senate, where that would be the check that we would need against further abuse of power.”

According to Clinton, President Trump “lives with this specter of illegitimacy” over the 2016 election, which Clinton lost.

“I don’t think he has any boundaries at all, Kara,” Clinton stated. “I don’t think he has any conscience. He’s obviously not a moral, truthful man. So he will do whatever he can to lift himself up. And remember, as I said, he lives with this specter of illegitimacy. He knows more about how he got really elected than we still do. Hopefully, we’ll learn more in the years ahead.”