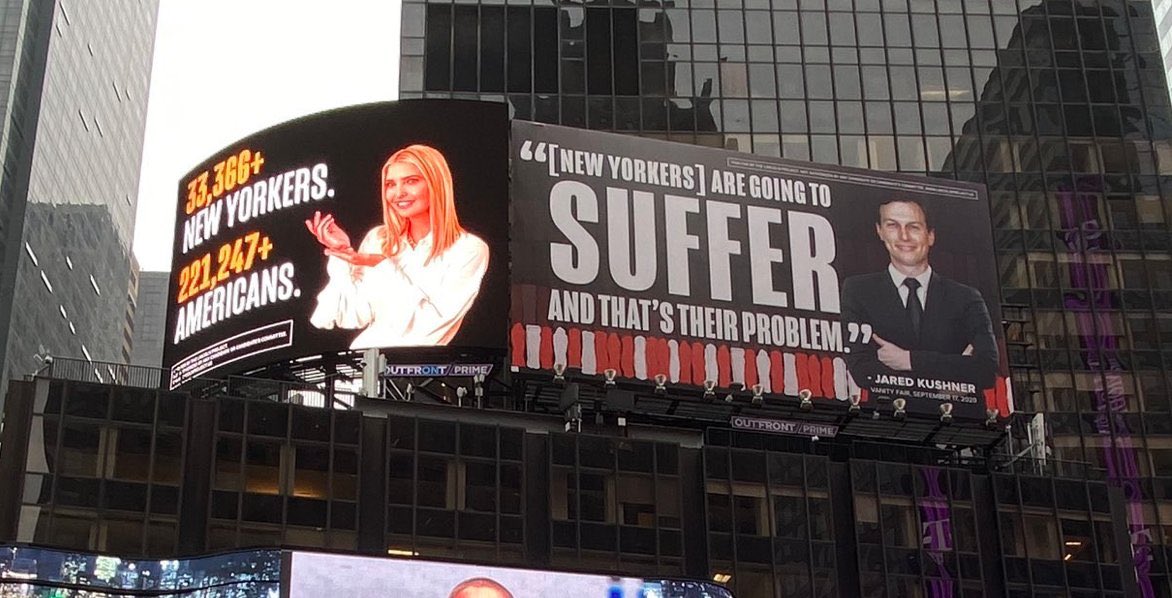 An attorney for The Lincoln Project has sent a scathing letter in response to a threatened lawsuit by Jared Kushner and Ivanka Trump, who were unhappy about two billboards the anti-Trump PAC sponsored in Times Square. The letter both points out the very steep legal thresholds for public figures to sustain defamation suits, and tosses some sharp-tongued insults at President Donald Trump’s daughter and son-in-law.

Matthew Sanderson, a partner with the D.C. law firm Caplin and Drysdale, penned the barb-filled letter, a reply to Marc Kasowitz, the New York attorney who had sent a letter demanding that the Lincoln Project take down their billboards, pictured above.

Kasowitz’s letter had claimed that the billboards were “an outrageous and shameful libel.”

“If these billboard ads are not immediately removed,” he wrote, “we will sue you for what will doubtless be enormous compensatory and punitive damages.”

Sanderson clearly holds a similar view, firing back at Kasowitz. “Please peddle your scare tactics elsewhere. The Lincoln Project will not be intimidated by such empty bluster.”

The Lincoln Project’s legal response to the frivolous threat of a lawsuit from Jared Kushner and Ivanka Trump’s lawyer.

This will not be the last they hear from us. pic.twitter.com/GNnFsnsCer

Sanderson quickly hit at the fact that both Kushner and Trump serve as senior advisors in the Trump White House, and Kushner specifically has been a part of the administration’s response to the coronavirus pandemic, making them virtually certain to be deemed “public figures” — a status which imposes a higher “actual malice” standard of proof in order to bring a libel claim.

“Your clients are no longer mere Upper West Side socialites,” wrote Sanderson, “able to sue at the slightest offense to their personal sensitivities.” Instead, he continued, the couple had been “public officials” since the president, “in a gross act of nepotism, awarded Mr. Kushner and Ms. Trump senior White House positions in 2017.”

Sanderson continued with a discussion of the relevant legal issues. “Fortunately, substantial constitutional protections are afforded to those who speak out about public officials. The Lincoln Project plans to avail itself of these constitutional protections to duly criticize Mr. Kushner and Ms. Trump until they cease to be public officials, at approximately Noon Eastern Standard Time on January 20, 2021.” (The last part, of course, a reference to when Joe Biden would be sworn in as president if he wins the November election.)

Sanderson’s letter then went through several points to illustrate that the billboards were “entirely accurate,” noting that Kushner had indeed been quoted as saying the phrase shown on his billboard in a Vanity Fair article, which the Lincoln Project had expressly cited as the source in the bottom right corner.

“Please contact us again if at some point you somehow succeed in convincing Vanity Fair to retract its article,” Sanderson wrote dryly.

Sanderson similarly dissects the billboard featuring Ivanka Trump, noting that she had posted the original image herself, holding up a can of Goya Black Beans, “in violation of federal ethics rules….infamously endors[ing] a commercial product,” and that the PAC had replaced the can of beans with the statistics listing 33,336 New Yorkers and 221,247 Americans who had died from Covid-19.

“Why?” Sanderson wrote. “Because Ms. Trump endorses the Trump Administration polices that have led to an unacceptable number of American deaths every bit as much as she once endorsed that can of beans.”

The letter makes clear that The Lincoln Project “would welcome the opportunity” to litigate the issue, and a footnote notifies Kushner and Trump that they should “retain any and all documents,” a standard legal notification that can result in consequences if relevant evidence is destroyed or otherwise not preserved and maintained prior to a lawsuit.

“These billboards are not causing Mr. Kushner and Ms. Trump’s standing with the public to plummet,” concluded Sanderson. Their incompetence is.”

“This isn’t over. Mr. Kushner and Ms. Trump will hear more from The Lincoln Project soon.”

Twitter users had previously noted the Streisand Effect consequences of Kasowitz’s letter, amplified by the Lincoln Project’s own mocking tweets. “Jared and Ivanka have always been entitled, out-of-touch bullies who have never given the slightest indication they have any regard for the American people,” said one such tweet. “We plan on showing them the same level of respect.”

Jared and Ivanka have always been entitled, out-of-touch bullies who have never given the slightest indication they have any regard for the American people.

We plan on showing them the same level of respect.

Mediate reached out to The Lincoln Project and confirmed that the PAC has planned additional billboards or other ads targeting Kushner and Trump.

UPDATE 9:30 pm ET: In addition to Sanderson, Mediaite confirmed that The Lincoln Project had multiple attorneys with strong backgrounds in First Amendment law who had offered to assist the PAC pro bono with their legal defense against Kushner and Trump. So far, seven attorneys (including Sanderson) have joined the effort.

Mark Zaid, a D.C.-based attorney specializing in free speech and media cases, tweeted that his law firm was “proud to also serve” on the “overall legal team” for The Lincoln Project, and applauded Sanderson’s letter.

“We are more than ready to defend against any frivolous lawsuit from [Kushner and Trump,” wrote Zaid. “Bring it.”

My law firm @MarkSZaidPC is proud to also serve on overall legal team for @ProjectLincoln & applaud/support this letter.

We are more than ready to defend against any frivolous lawsuit from Kusner/Trump. Bring it. https://t.co/F55jejk2YC pic.twitter.com/8cOLcsf5uJ

Olivia Troye, a former adviser to Vice President Mike Pence who served on the White House Coronavirus Task Force, tweeted that the “billboards are FACT & Jared Kushner knows it,” stating that she had personally heard Kushner say the quote from the Vanity Fair article that was featured on the Lincoln Project billboard.

These billboards are FACT & Jared Kushner knows it. “Cuomo didn’t pound the phones hard enough to get PPE for his state-His people are going to suffer & that’s their problem.” I heard these & other comments repeatedly. Anyone in the White House who says otherwise is lying. #vote https://t.co/OZ3KaeE1T7 pic.twitter.com/P7QKTWoSDy