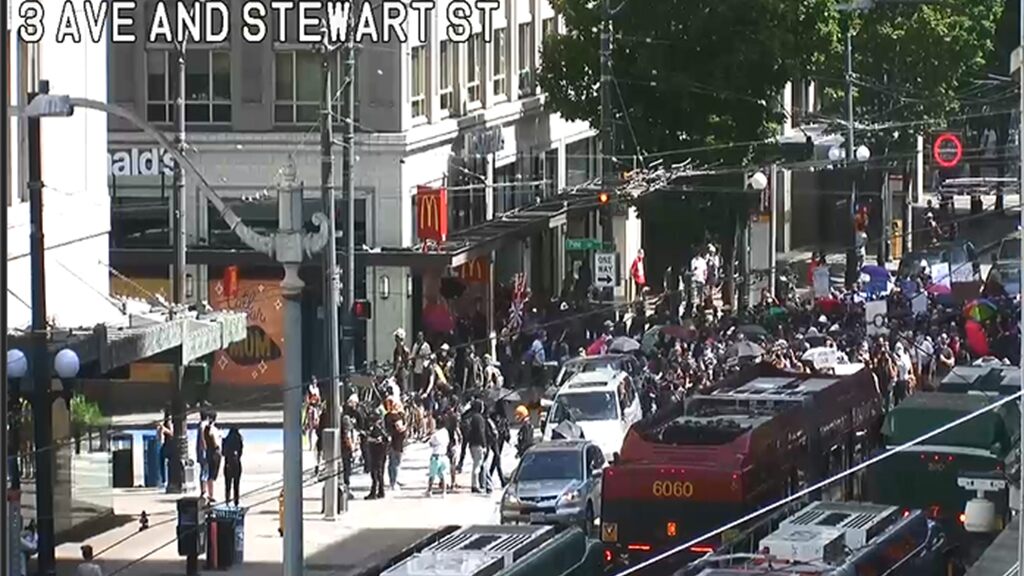 In one scene from May 29 that went viral, video showed officers punching a man multiple times while arresting him. At another protest on Capitol Hill on June 7, an officer arresting a protester shoved the person into the ground, causing bruising and bleeding on the person’s face, even though the person was not resisting arrest, the OPA found.

One officer who punched the man on May 29 faces a possible suspension. The officer who pushed the protester into the ground received a written reprimand.

A summer of protests is testing Seattle’s system for investigating alleged misconduct by Seattle Police Department (SPD) officers. The OPA received 19,000 complaints about officer behavior and response to the protests and has opened 128 investigations.

Nearly 13,000 of those complaints were about another viral moment on May 30, when an officer pepper-sprayed the crowd, dousing a young child in the process. OPA Director Andrew Myerberg last month found the officer did not violate SPD policy or use excessive force because Myerberg concluded the officer inadvertently sprayed the child.

OPA released findings in five investigations Friday. Other cases about more recent complaints of excessive force and injuries to protesters are still under review.

May 29 marked the start of major local protests here in response to the Minneapolis police killing of George Floyd. After an evening of protest, a small group remained in the Chinatown International District around midnight and some broke windows on storefronts. Several videos circulated online showing officers arresting a person on the ground and, in the process, punching him multiple times.

According to the OPA’s review, officers were trying to block off a street when the man tried to get past them and then scuffled with an officer. Then, that officer and another struggled to arrest him.

The man was holding a plastic water bottle and swung the bottle up toward the officer, according to the OPA’s report and video published by KING 5. (One officer said the bottle hit him in the shoulder.)

A half-second later, one of the officers punched the man twice. Then, the other officer punched him six to eight more times.

Myerberg parsed the two officers’ actions. The first, he concluded, was justified because the man was resisting arrest and because the two punches were an immediate reaction to the water bottle.

But the other officer’s six to eight blows were excessive, Myerberg wrote. The man had already stopped swinging the water bottle, but the officer did not “modulate his force,” Myerberg wrote.

“Yes it’s a water bottle but with a hard top and [not knowing] whether or not it’s frozen — they’re entitled as a matter of training, policy and law to use commensurate force to prevent themselves from being assaulted,” Myerberg said in an interview. “That doesn’t mean they can punch someone for a prolonged period of time or when the threat subsides.”

Myerberg said he relied mostly on video taken by the public because the arresting officers were too close to the person they were arresting for their body cameras to clearly show what happened. Other officers in the area were turned away from the arrest.

A discipline committee will recommend how to reprimand the officer, and the final decision will be up to the police chief. Myerberg said the recommendation will be an unpaid suspension of more than one day, though details haven’t been finalized.

At another protest on Capitol Hill on June 7, an officer “forcibly pushed the top half of [a protester’s] body down twice. This caused [the person’s] head and face to strike the ground,” causing bruising and bleeding, Myerberg wrote.

According to the investigation, officers were standing behind a metal barricade trying to get protesters to move so bike officers could pass through. When some in the group would not move, police started making arrests.

Video shows an officer pushing a person being arrested toward the pavement as a line of officers in fatigues stands nearby. Afterward, the person complained of pain and of feeling about to pass out, according to the investigation.

In a report afterward, the officer said he pushed the person down but didn’t say whether he slammed their head to the ground. The officer said he considered using his knee on the person’s upper back, “but decided not to do so given the context of the protests,” the investigation says.

The protester did not respond to the OPA’s interview requests, the report says.

The officer’s force wasn’t proportional, Myerberg concluded, noting that the officer was nearly twice the size of the person he was arresting.

The OPA recommended a written reprimand.

In both cases, Myerberg also considered whether officers should have attempted to deescalate, but found it wasn’t safe or feasible.

The OPA’s findings “demonstrate what our community has known for a long time — the Seattle Police Department (SPD) used excessive force against protesters,” the the Seattle Community Police Commission said in a statement Friday. Still, the citizen watchdog group said it has “continuing and important concerns” that provisions in police labor contracts “could stand in the way of accountability.”

One complaint claimed an officer pushed down a protester and that police hit protesters with a vehicle at a protest on June 6. Video showed the protester trip over another person as an officer pulled her backward and did not show a vehicle hitting protesters, the OPA concluded.

The OPA noted, though, that on that day an officer got into “a prolonged back and forth with some of the demonstrators” including “sarcastic comments and other statements that did not seem to serve any law enforcement purpose.” Myerberg referred those issues to the officer’s supervisor.

In another complaint, a protester said an officer pointed a gun at protesters on June 2, but the OPA did not find video evidence. Myerberg concluded it was “possible” that protesters could have seen a Washington State Patrol officer who was pointing a rubber bullet rifle toward the crowd, though he “could not conclusively foreclose the possibility” that another officer pointed a gun.

Myerberg also reviewed a claim of false arrest and biased policing when police arrested a woman who crossed a barricade during a protest on Capitol Hill on June 5. After reviewing body camera footage, Myerberg concluded there was not evidence that police had shown bias and found the woman had been properly read her Miranda warnings.