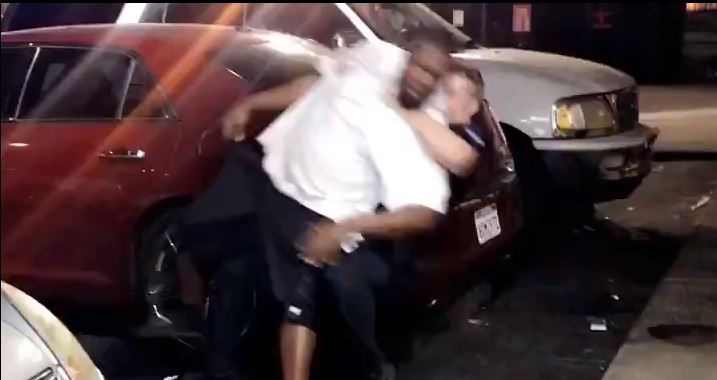 Mark Matthew Bender Jr., 35, of San Bernardino, died after he was shot multiple times. No one else was injured, San Bernardino Police Sgt. John Echevarria said.

At around 11:15 p.m., officers responded to a call of a man with a gun who was jumping on cars outside of the King Tut liquor store on Baseline Street near Waterman Avenue, police said in a statement. When the responding officer arrived, he contacted Bender and gave commands that he did not follow, and then Bender tried to go into the store, which had people inside, the statement said.

The officer tried to restrain Bender and there was a struggle, police said.

“The suspect was able to physically overpower the officer and retrieved a weapon from his pocket, and was turning to face the officer,” the statement said. “At this time, an officer-involved shooting occurred. The officer discharged his duty weapon four times and the suspect was struck multiple times.”

The shooting of Bender, a Black man, comes a couple of months after nationwide protests over police shootings of people of color. A demonstration was planned at 5:30 p.m. on Friday at the location of the shooting, at 279 Baseline Street.

“We demand to see body (camera) footage and footage from the store location. We demand the truth,” a flyer about the event circulating on social media read. It wasn’t clear who was organizing the demonstration.

On Friday afternoon, San Bernardino police released body camera footage of the incident and the 911 call.

The call came from a woman, who reported a man “waving around a gun” who had been drinking. She described him as Black man, with a white shirt and black shorts.

The body camera footage shows the officer approaching Bender, who appears to match the caller’s description. The officer pulls out his gun and says “let me see your hands.” Bender then walks toward the store, and the officer tries to restrain him as Bender says “don’t touch me.”

The body camera footage goes dark during the struggle, but the audio can still be heard, with the officer saying, “Stop fighting.” Then shots ring out.

A separate video of the incident shows the officer taking Bender to the ground on top of his back. Bender then stands back up. As he moves up with his back turned away from the officer, what appears to be a black gun can be seen in his right hand as he appears to turn to face the officer.

The officer then pulls out his weapon and fires at Bender.

A black loaded 9mm semi-automatic handgun was found at the scene, police said. Bender was an ex-felon and was not permitted to possess a firearm in the state, according to police.

Bender had been arrested on suspicion of various charges going back to 2003, but the outcomes of those cases weren’t immediately clear. The arresting charges included attempted murder, domestic violence, false imprisonment and various drug charges, according to San Bernardino police.

Tom Dolan, executive director of Inland Congregations United for Change, said it was too early to give an opinion about Bender’s shooting.

But, he said, “We hope to see reports from the police about exactly what happened and to follow up with the community.”