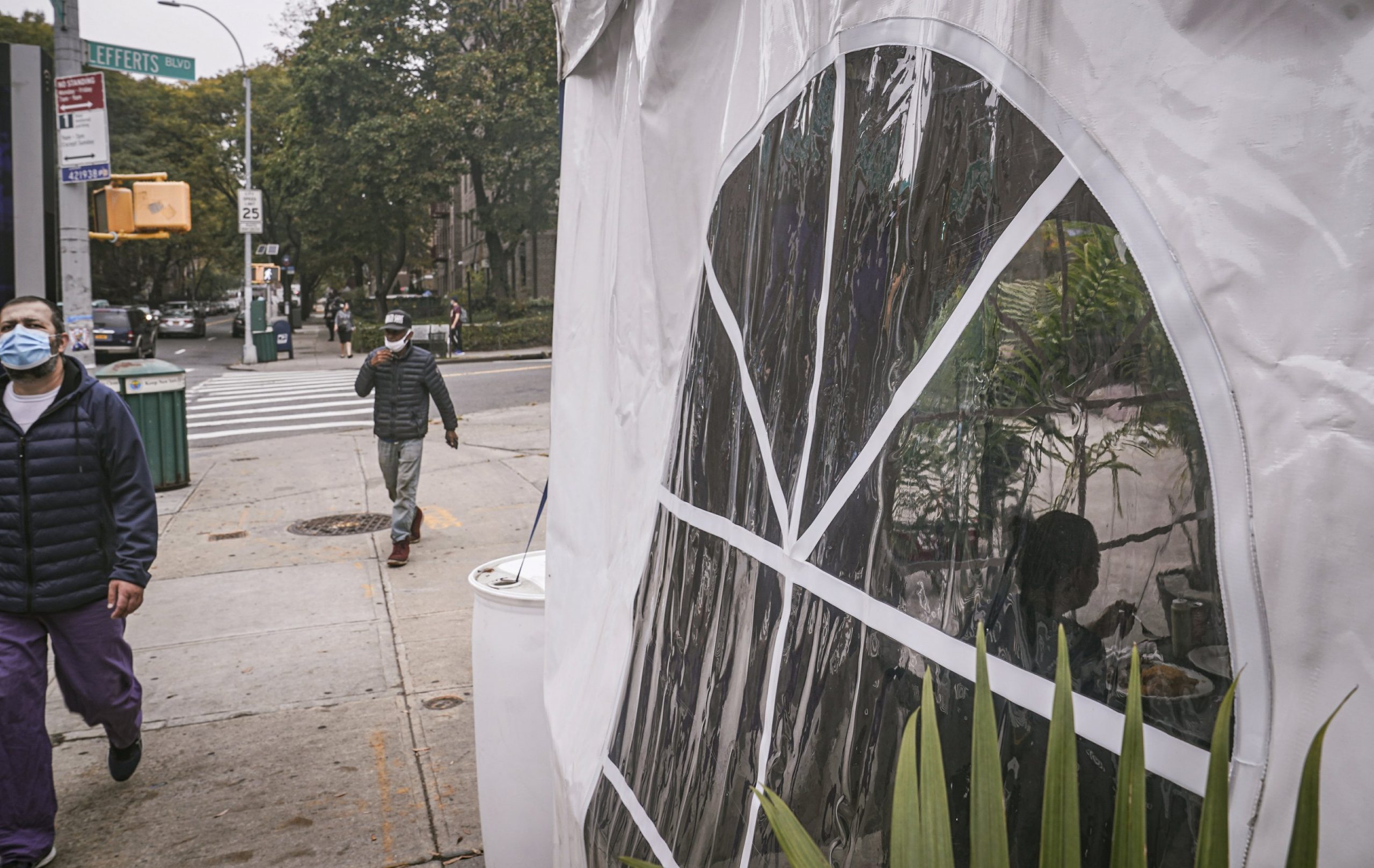 NEW YORK — The number of people hospitalized in New York because of the coronavirus has climbed back over 1,000.

Gov. Andrew Cuomo said there were 1,023 hospitalizations around the state as of Thursday. That’s more than double the number that were hospitalized month ago, and the first time since late June that the state has seen that many in hospitals with the virus.

At the pandemic’s peak in April, nearly 19,000 people were hospitalized. Statewide, 1,637 people tested positive with the virus on Thursday, on par with where levels have been for the month.

HERE’S WHAT YOU NEED TO KNOW ABOUT THE VIRUS OUTBREAK:

— UN chief says G-20 leaders must coordinate to fight coronavirus. Secretary-General Antonio Guterres is frustrated leaders of 20 major industrialized countries didn’t do it in March as he proposed.

— Schools from New Jersey to California have been hit with teacher and staff layoffs. Urban areas lacking the property wealth of suburban communities are especially vulnerable to budget cuts, with many schools hoping for a new round of federal money.

— An online Japanese-language text messaging service for suicide prevention has grown to 500 volunteers since March.

Follow all of AP’s coronavirus pandemic coverage at http://apnews.com/VirusOutbreak and https://apnews.com/UnderstandingtheOutbreak

HERE’S WHAT ELSE IS HAPPENING:

IOWA CITY, Iowa — Iowa has among the nation’s highest coronavirus infection and death rates and residents should avoid gatherings in most counties, federal health experts say.

Iowa had 238 new cases and 2.8 deaths per 100,000 people last week, about double the national per capita average between Oct. 10 and Oct. 16, the White House Coronavirus Task Force reported.

The task force report of Oct. 18 was released Friday by the Iowa Department of Public Health. The grim statistics came as Iowa’s hospitals faced a surge of coronavirus patients. The number hospitalized hit a record 536, according to data released Thursday.

In all, 90% of Iowa’s 99 counties are experiencing high or moderate levels of virus transmission.

The state reported a one-day record of 31 deaths on Wednesday and 38 more in the two days since for a total of 1,617.

The additional cases and deaths reported by the Department of Health Services increased the state’s totals to 235,882 cases and 5,865 deaths.

Arizona in the past month has seen a gradual increase in COVID-19 cases and related hospitalizations but levels remain well below the thousands of cases reported on some days in June and July when Arizona was a national hot spot. The outbreak diminished in August and September as many local governments imposed mask mandates and the state re-imposed some business restrictions.

PARIS — France has surpassed 1 million confirmed coronavirus cases since the start of the pandemic, becoming the second country in Western Europe after Spain to reach the mark.

The national health agency announced 42,032 new cases on Friday, bringing the total to 1.04 million cases. Health experts say the actual numbers are likely higher because of a lack of testing, asymptomatic cases and reporting issues.

French President Emmanuel Macron called on citizens to respect a nightly curfew and other measures to fight the rapid spread of the coronavirus.

Macron says cases are “very strongly accelerating,” with coronavirus patients occupying more than 42% of ICU beds nationally and 64% in the Paris region.

The government announced a six-week curfew from 9 p.m. to 6 a.m. in 46 regions and Polynesia.

France has more than 34,200 deaths, the fourth-highest death toll in Europe behind Britain, Italy and Spain.

LONDON — Bars, restaurants and most shops have closed across Wales in a lockdown to curb surging coronavirus cases.

The Cardiff-based government has imposed the U.K.’s strictest lockdown for 17 days starting Friday night. Most businesses will close, high school students will be taught online and people will avoid non-essential journeys.

The U.K. has Europe’s deadliest coronavirus numbers, with more than 44,500 confirmed coronavirus-related deaths. There have been 1,756 deaths in Wales, which has a population of about 3 million.

LA GUAIRA, Venezuela — Some Venezuelans headed back to the beach on Friday after the government relaxed measures aimed at containing the coronavirus.

It’s been seven months since tourists went to the La Ultima beach in the Caribbean town of La Guaira, outside the capital of Caracas.

Vendors again peddled drinks and snacks to sunbathers. Umbrellas waved above the sand.

President Nicolás Maduro this week announced a broad reopening of most private businesses, parks and beaches around the country, saying the curve of new infections has flattened and “is steadily descending.” Open-air concerts, amusement parks and drive-ins return as well.

But Venezuela’s airports remain closed to international travel and officials haven’t said when they plan to resume operations. The government has reported 88,416 confirmed cases and 759 deaths since March.

GENEVA — The head of the World Health Organization warns that countries in the Northern hemisphere are at a “critical juncture” with rising cases and deaths.

“The next few months are going to be very tough and some countries are on a dangerous track,” said WHO director-general Tedros Adhanom Ghebreyesus at a press briefing on Friday. “Many countries are seeing an exponential increase in cases,” and he called for immediate action.

Maria Van Kerkhove, WHO’s technical lead on coronavirus, says the U.N. health agency had recorded about 445,000 new coronavirus cases in the past 24 hours; nearly half of those were from Europe.

She says in many cities across Europe, “the capacity for ICU is going to be reached in the coming weeks.”

The number of COVID-19 patients needing intensive care surpassed 1,000 on Friday. So far, hospitals say they can handle the case load.

Italy added another 91 deaths, bringing the confirmed total to 37,059 deaths since the beginning of the outbreak.

ALFRED, Maine — Officials with a Maine county say a coronavirus outbreak that sickened more than 80 people at a jail is over.

The outbreak occurred at York County Jail in Alfred and was connected to a larger outbreak centered on a northern Maine wedding and reception. The Maine Center for Disease Control and Prevention has said an employee of the jail attended the wedding.

The outbreak connected to the Aug. 7 wedding event sickened a total of 178 people and killed eight. The case total includes the cases from the Alfred jail.

The County Commissioners of York County said in a statement Friday that no inmates are currently receiving treatment and all staff have returned to work. An inquiry by an outside examiner continues.

County Manager Gregory Zinser says the county has stepped up efforts to prevent the spread of coronavirus since the outbreak.

A Maine CDC spokesperson confirmed the facility met the criteria to close an outbreak investigation on Oct. 12.

SOFIA, Bulgaria — Bulgarian Prime Minister Boyko Borissov will go into self-isolation after contact with an official who tested positive for the coronavirus.

Borissov says he was in contact with Nankov five days ago and a PCR test done Friday was negative. Before these events on Friday, Borissov had met with visiting U.S. Under Secretary of State Keith J. Krach.

PINE RIDGE, S.D. — The Oglala Sioux Tribe is locking down the Pine Ridge Indian Reservation for one week in response to surging coronavirus cases in the state.

The lockdown begins at 10 p.m. Friday and lasts until 6 a.m. Oct. 30 when all non-critical travel is barred. The tribe says non-essential businesses should close to the public and travel to non-essential work or non-emergency medical appointments to or from the reservation should stop.

Tribes nationwide have taken an aggressive approach to preventing infections amid concerns Native Americans could be particularly vulnerable to the coronavirus.

The lockdown comes as South Dakota surpassed 9,000 coronavirus cases on Thursday and reported an all-time high of 973 cases and 14 deaths in one day. October has been South Dakota’s deadliest month, with 124 of the 347 deaths.

The Oglala Sioux Tribe posted on its Twitter page there were 391 active cases on the reservation, which has a population of nearly 20,000 people.

BOSTON — Massachusetts has ordered the shutdown of all indoor ice skating facilities in the state for two weeks in response to several coronavirus clusters linked to ice hockey games and practices.

The order takes effect Friday and lasts until Nov. 7, the state Department of Public Health announced. College and professional programs are exempt from the order.

There have been at least 30 coronavirus clusters associated with organized ice hockey activities, involving residents from more than 60 cities and towns in the state, the department says.

Health officials report 5,028 cases and 82 deaths in the last 24 hours. Intensive care units across the country were treating 782 people for the coronavirus.

Authorities have stepped up protective measures in localities where the rate of infection exceeded 3 people per 1,000 inhabitants, ordering the closure of schools, theaters, bars and restaurants.

The eastern European nation of 19 million has recorded a total of 201,032 confirmed infections and 6,245 deaths.

LISBON, Portugal — Portugal’s parliament has passed a law making it mandatory to wear face masks in many outdoor situations.

The law approved Friday means anyone age 10 or older must wear a mask in public spaces whenever it is “impractical” to keep at least a 2-meter distance from others.

Police will enforce the measure. Failure to comply entails a fine of up to 500 euros ($591).

MADRID — Spanish Prime Minister Pedro Sánchez appealed to Spaniards to pull together and defeat the coronavirus, warning: “The situation is serious.”

Sánchez, in a televised address to the nation Friday, acknowledged public fatigue with restrictions to contain the spread. But he added: “We have to step up the fight.”

This week, Spain became the first European country to surpass 1 million confirmed cases. Sánchez says the actual number could be more than 3 million because of gaps in testing.

The current pressure on the health system, including hospitalizations, is not as acute as it was in the spring, he says. Even so, he asked for the public’s cooperation, discipline and unity during the winter months.

Prime Minister Mateusz Morawiecki appealed Friday to Poles to strictly observe the restrictions in order to protect lives. The appeal came as the nation of 38 million hit another daily record of new registered infections — over 13,600 and 153 deaths.

The measures, expanded from local red zones, include wearing masks at all times outdoors and switching all primary schools to remote learning. Morawiecki says the goal is to limit social contacts and the number of passengers on public transport. In other measures, restaurants and other eateries can provide takeout only for another two weeks and gatherings cannot exceed five people, except for professional activity.

People over 70 are asked to stay home, and a system of support in delivering supplies is being put in place.

“We absolutely must cut the means of transmission of infection,” Morawiecki said.

Poland’s government is also appealing to Poles to stay home and refrain from observing the national tradition of visiting graves on All Saints’ Day, Nov. 1.