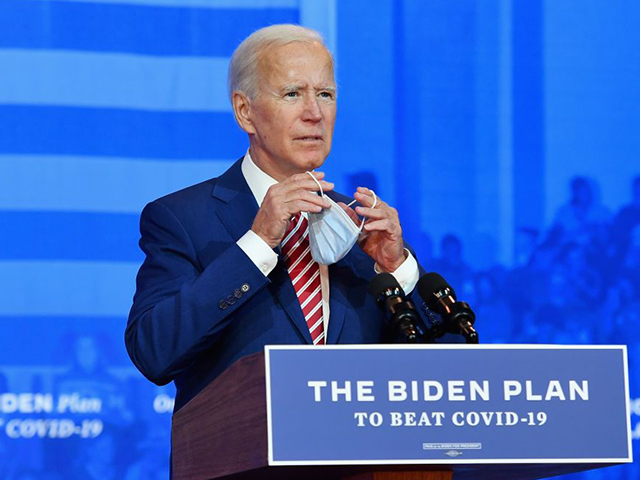 Former Vice President Joe Biden is promising that, if elected, he would urge state and local governments to issue mask mandates nationwide.

The Democrat nominee, who has shifted on his support for a federal mask mandate, told supporters in Delaware on Friday that it was vital for the government to implement a “national strategy to position our country to finally get ahead of this virus.” As part of the strategy, the former vice president promised not only to get a spending bill, that deals with both the economic and public safety aspects of the novel coronavirus, through Congress by January, but also to push for comprehensive mask mandates.

“I’ll go to every governor and urge them to mandate mask-wearing in their states,” he said. “If they refuse I’ll go to the mayors and county executives and get local masking requirements in place nationwide.”

Biden added that his administration would “mandate mask-wearing in all federal buildings and all interstate transportation” since “masks” have been proven to “save lives.”

“Wearing a mask is not a political statement. It’s a scientific imperative. It’s a point of patriotic pride, so we can pull our country out of this god awful spiral we’re in,” he said.

The former vice president’s comments come as his campaign has been forced to walk a tight rope on national mask mandates. Initially, over the summer, Biden repeatedly called for the federal government to institute a nationwide order requiring every citizen to don a mask when in public.

As public attitudes towards the novel coronavirus became normalized, however, public opinion not only began to turn against the issue, but questions arose over the constitutionality of such a measure. In September, Biden backed away from the issue slightly, telling a local-CBS affiliate such a mandate was likely to extend beyond the constraints of presidential authority.

“There’s a constitutional issue whether the federal government can issue such a mandate,” the former vice president said, adding he was unlikely to take such a step because of that reason if elected. “I don’t think constitutionally they could, so I wouldn’t issue a mandate.”

Since then, Biden has attempted to balance the issue, as evidenced on Friday when the former vice president pledged to impose mask requirements on federal property, while simultaneously pushing for states and local governments to implement their own mandates.