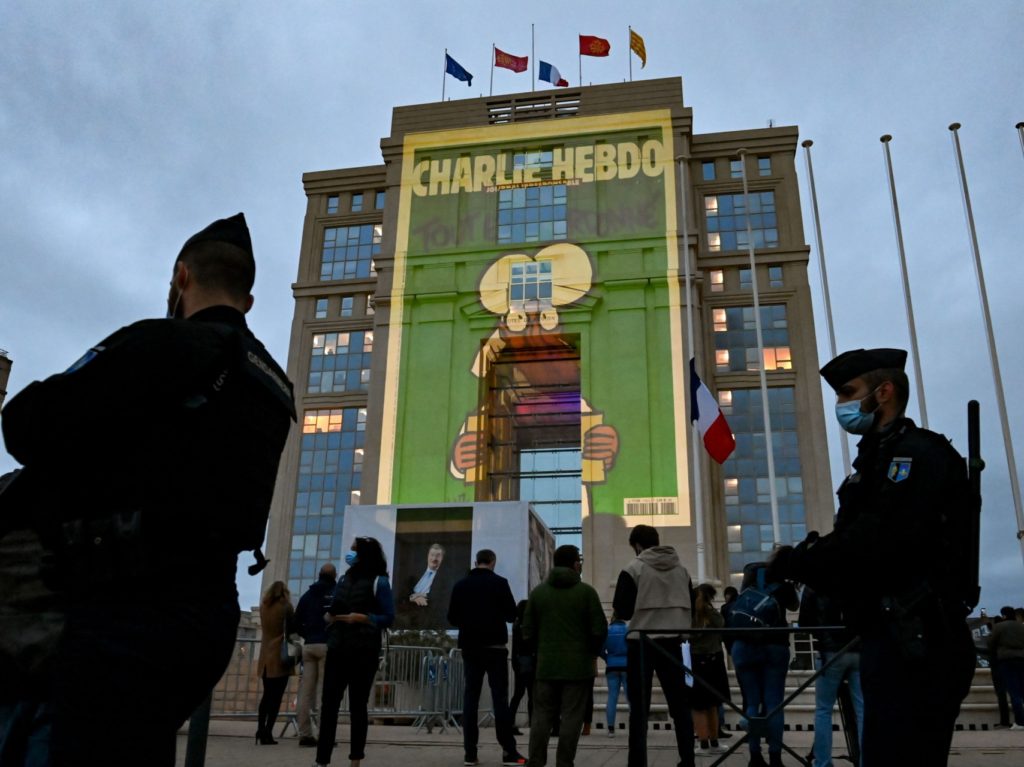 A giant cartoon image of Mohammed projected onto the side of a government building in defiance of murderous Islamist zealots. Such an action would be unthinkable in the United Kingdom and, indeed, in almost any country other than France.

So congratulations to the cities of Toulouse and Montpellier in South West France for holding their nerve and standing up for freedom of expression in a world where, increasingly, depressingly, the words ‘I believe in free speech’ are invariably qualified by a weasellish, self-exculpatory ‘but…’

Well, the Mayors of that French region are not going to put up with any cowardly, surrender-monkey nonsense.

One regional Mayor, Carole Delga was quoted as saying:

‘There must be no weakness in the face of the enemies of democracy, facing those who transform religion into a weapon of war…those who intend to destroy the Republic.’

She’s right and she makes it sound so easy. But to realise how hard it has in fact become you only have to imagine what the response would be in, say, Britain.

For a start, no municipal authority would dream of allowing official buildings to be used for what they would deem a ‘provocative’ and ‘divisive’ gesture. Local government across the UK is so thoroughly infiltrated by Common Purpose, by critical race theory, by woke values generally — and also, in many cases, so beholden to the Muslim ‘community’ vote — that it simply wouldn’t have the moral conviction to stick up for a schoolteacher who had been beheaded in the streets by an Islamist thug. Rather, it would wonder — a bit like one or two hideous people on Twitter — whether maybe the poor chap sort of, kind of deserved his fate…

The same goes, by the way, for the emergency services. One thinks, for example, of Neil Basu — the grisly, uber-woke counter-terrorism chief at the Metropolitan Police, who wants to persuade us that the most significant terror threat in the UK comes from the ‘far-right’. (Spoiler alert: no it doesn’t).

Perhaps the worst recent example of Britain’s institutional surrender to militant Islam was the collective response to the Manchester Arena bombing, in which Salman Abedi a Libyan-born terrorist (generously given asylum by the UK) showed his gratitude to his adoptive country by blowing up himself and dozens of children at an Ariane Grande concert.

This atrocity is currently the subject of a public inquiry. A number of shocking details have emerged, such as the fact that several concerned onlookers reported Abedi’s suspicious behaviour to the security guards, including one called Mohammed, only to be told: ‘Yeah, yeah. We’ve seen him. It’s fine.’

We’ve also heard about the policewoman who should have been there but was taking an ‘unacceptable’ two-hour lunch break. Under cross-examination, she blamed poor training — which is probably true. I expect that the focus was mainly on how not to be racist — rather than on, say, protecting members of the public from murderous terrorists.

We also know that Greater Manchester’s laughably named Fire and Rescue Service, along with the ambulances, only turned up two hours after the blast, blaming ‘communication failures.’

Imagine being one of the victims’ parents, knowing this. Your little girl was lying bleeding and in pain for two whole hours because the rescue services couldn’t get their act together, despite Britain being supposedly a first world country.

Does any of this suggest that Britain has any appetite whatsoever to fight back against the Islamist terror threat? Certainly, it does not on an institutional level. But I’m not even sure it does at the level of the British populace either.

I’ve been reading some of the comments on Twitter by French people about Samuel Paty’s beheading and they are spitting blood. They’re certainly not doing what the audience and most of my fellow panellists on a godawful BBC3 youth discussion programme called Free Speech did a few years ago, pointing the finger of blame at ‘British foreign policy’ and ‘Islamophobia.’

The French still seem to understand that chopping a man’s head off because he showed some cartoons to his students in a lesson about free speech is wrong, wrong, wrong — even if the person depicted in the cartoons happens to be the revered founding father of your religion.

A few years ago I spent three months living near Montpellier. It’s the region of France known as Cathar country. The Cathars were a ‘heretical’ sect horribly persecuted by the Catholic authorities — burned en masse in the church at Beziers, and so on — and the memory is ingrained in the culture. Perhaps that explains this local show of defiance to religious oppression.

But I think the French generally ‘get’ this problem more than most other countries do a) because they seem to experience more of it — cf. the Bataclan massacre, b) because laïcité — secularism — is enshrined in their constitution, and c) because they are bloody-mindedly French.

The various individuals and institutions associated with this bloody murder, such as the mosque which stirred up the trouble by calling on Muslims to take action against this blasphemy, are being properly punished.

“Nobody, really nobody, could imagine, on October 9 when I posted it, that it would end with this killing’, claimed the leader of the mosque, disingenuously, after the beheading.

In the UK, and elsewhere, he would have been taken at his word. Not in France: they’re closing him down — and relentlessly pursuing all the other people associated with this heinous crime.

This is how it should be done.