Trump Is ‘Most Pro-Gay’ President, Wants to ‘Let You Live Your Life’ 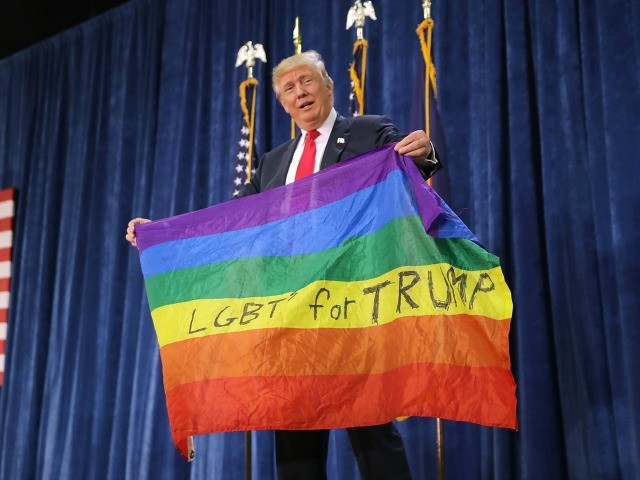 OUTspoken characterizes its mission as offering a voice for LGBT conservatives in contrast with left-wing orthodoxies held by the “mainstream media” and “intersectional-left”:

Nearly four years after America elected its first President that supports marriage equality, our nation grapples with a culture war that has grown a significant and visible community of LGBT conservatives who support freedom and diversity of thought – only to be rejected by the mainstream media and the intersectional-left.

“A lot of people I know and a lot of people affiliated with OUTspoken [view Trump] as the most pro-gay [president],” Moore said. “[He] wants to be hands-off and let you live your life. He does not want to take away any of your rights [and] doesn’t want to give you special rights. He’s the first president to assume office being in support of gay marriage.”

Marlow recalled, “Obama was against gay marriage in both elections.”

“It wasn’t until 2012 — Hillary Clinton, Joe Biden, and Barack Obama — they all came out [and] had their evolution, if you recall,” Moore stated, “and yet you have this interview with Donald Trump in the year 2000, and the Advocate magazine which is a big gay magazine I used to work for and they fired me when I came out as a Trump supporter. They did an interview with him in the year 2000 and they swooned over how pro-gay he was, in the sense that he’s a business guy, he wants the best person to the job.”

Richard Grenell, former acting director of national intelligence, recently echoed Moore’s characterization of the 45th president as “the most pro-gay president in American history in a video for the Log Cabin Republicans. “Donald Trump has done more in three years to advance gay rights than Joe Biden has done in 40 plus years in Washington,” he said. “For four decades, Joe Biden has attacked the LGBT community.”

Moore identified the Human Rights Campaign — a left-wing political lobby marketing itself as an advocate for “LGBTQ people” — as illustrative of what he dubbed “Big Gay” and “Gay Inc.,” a constellation of organizations advancing leftist ideology and partisan Democrat politics under the veil of advocacy for LGBT persons.

“[OUTspoken] is exposing how the left and the Democrat Party — and what I call ‘Big Gay’ or ‘Gay Inc.’ — are one and the same and work in tandem,” Moore said of his news media outlet. “Gay Inc. has absolutely nothing to do with LGBT rights or LGBT individuals, particularly, the people they purport to care about.”

“Big Gay” and “Gay Inc.” is “only about Democrat politics,” explained Moore. He noted how such political lobby organizations enrich themselves while posturing as advocates for marginalized persons. “Increasingly, it’s only about big business and how it’s the sort of intermediary between big business and politics.”

Moore described the labyrinthian layers of left-wing nonprofits operating under the umbrella of presumed advocacy for LGBT persons.

“[It is] this network of hundreds of nonprofits that you’ve probably never heard of,” Moore stated. “[They] have these massive bloated budgets. They’ve taken hundreds of millions of dollars a year, the largest one being the Human Rights Campaign, which is the largest gay lobby group in the country.”

The Human Rights Campaign, a 501(c)(4) nonprofit organization, disclosed over $51 million in revenue in 2017, the most recent year of data shared in its annual reports. Its 2019 financial disclosure indicates $49 million of revenue for 2018.

Moore observed how left-wing news media outlets boost the Human Rights Campaign’s influence by framing the organization as a de facto voice of LGBT Americans, creating an illusion of LGBT persons as a left-wing and partisan Democrat demographic.

Moore explained the operations of “Gay Inc.” in a video he released on Monday.

What is “Gay Inc?” @Chadwick_Moore EXPOSES the Democrat Party’s exploitation of LGBT Americans.

WATCH: this is how Big Business weaponizes the rainbow. Ὃ 🏳️‍🌈 pic.twitter.com/EDwlhnTEOb

Organizations ostensibly advocating on behalf of LGBT persons expose their left-wing political and partisan Democrat agendas given their promotion of lawful access to abortion in the context of Judge Amy Coney Barrett’s nomination to the Supreme Court, Moore held.

Moore noted, “It’s funny to watch Big Gay send out these emails and press releases about [Amy Coney Barrett]. Is there one issue that gay people really don’t have to worry about that much other than abortion? And by the way, if you’re a gay couple and you want children, wouldn’t you want fewer abortions and more adoptions because that’s one way you’re going to get children?”

The Human Rights Campaign and similar lobbies are ideologically indoctrinating those they claim to defend, Moore warned. He said, “They’ve spent all this time radicalizing gay people against things that have nothing to do with being gay, such as abortion.”

Moore cautioned against the push of transgender ideology onto children.

“If there is a gay agenda, it’s things like this that make me think, ‘Oh, yes there is,’ and what I mean by that is, for a lot of us, this stuff came about of nowhere,” Moore remarked. “It’s getting these kids involved — well, not actually out of nowhere, it came after gay marriage — but it was like on this massive level, and you see this with the drag queen storytime with the drag queen children — that disgusting thing — and now with the trans kids.”

Moore continued, “Gay people that I knew when I worked in gay media and were sort of a little older than me and who I respected, they would always say things like the whole pedophile thing and pederasty thing was something that was such a stereotype about gay men for so long, and the gay rights people — the early ones — who were far more libertarian-minded [and] just really want to be left alone and weren’t asking for special privileges, they fought so hard to get away from that stereotype.”

Moore identified how political lobbies manufacture imaginary ills to justify their own self-perpetuation.

“There’s no other social movement that has achieved so much in such little time and has changed so many hearts and minds and opinions and had been so incredibly well-funded and so incredibly effective than the gay rights movement,” Moore assessed. “After gay marriage happened, that was kind of the end of it and everyone knew that.”

Moore went on, “Instead of a lot of these groups disbanding or coming up with a new mission, they sort of doubled down on this oppression narrative and needing to find villains in America, which of course they’ve turned to Republicans and Christians

“Instead of celebrating … they have to come up with new problems,” Moore concluded.