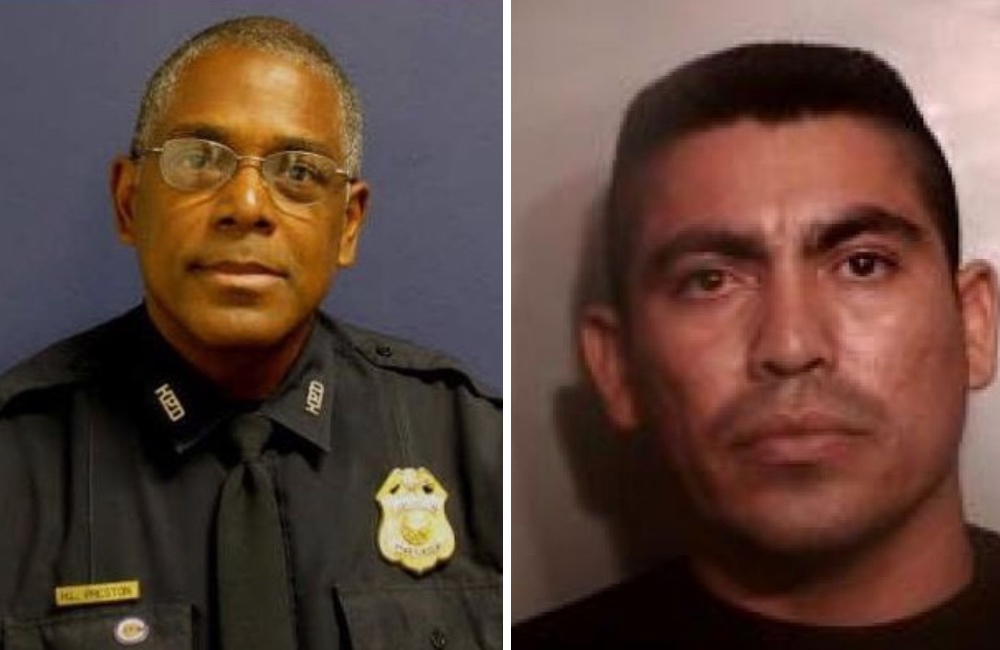 One Houston police officer was killed and another was injured when they were shot while responding to a reported domestic disturbance Tuesday morning at a southwest Houston apartment complex, according to police. A suspect has been taken into custody and transported to a hospital.

Chief Art Acevedo and Mayor Sylvester Turner asked for prayers and condolences for the family of Sgt. Harold Preston, who they identified as the slain officer. He served the department for 41 years. The second officer, Courtney Waller, who has served the department for three years, was shot in the arm and is expected to survive. Both officers were taken to Memorial Hermann Hospital.

“As good as he was as a cop, he was a better human being. And we’re going to miss him,” Acevedo said about Preston, calling him a hero. Law enforcement members gathered in prayer in front of the hospital and planned to escort Preston’s body to the medical examiner’s office.

The shooting occurred on the 2600 block of Holly Hall Street south of the Texas Medical Center while the officers were responding to a call regarding a domestic dispute, police said. When they arrived, the suspect and officers exchanged gunfire.

Rest in Peace, brother. You will always be remembered and your sacrifice will never be forgotten. pic.twitter.com/kYNMmBioIN

The suspect’s 14-year-old son was struck in the arm. He was taken to Texas Children’s hospital and is expected to survive.

Preston was shot multiple times in the head and spine, police said.

After Waller was shot in the arm, a Good Samaritan helped him get to the front of the apartment complex away from the gunfire, Acevedo said.

A suspect was taken into custody “without further incident” around 10:30 a.m. and transported to a hospital, police said. Acevedo identified the suspect as 51-year-old Elmer Manzano. He is in stable condition at Ben Taub Hospital with a gunshot wound to the abdomen, Acevedo said.

Police responded to reports of a family disturbance at the same location on Sunday and Tuesday, but the district attorney’s office declined to file charges in connection with those incidents, Acevedo said. The suspect’s wife reported a family disturbance on Saturday as well.

Manzano was convicted on a felony charge of evading arrest in a motor vehicle in 2002, according to Harris County court records.

ICE officials identified Manzano as a “convicted criminal alien who is unlawfully present in the U.S,” according to Fox News.

Following his arrest Tuesday, ICE officials from the agency’s Enforcement and Removal Operations (ERO) unit placed an immigration detainer with the Harris County Sheriff’s Office, ICE said in a statement.

Police cruisers, fire trucks and ambulances swarmed an apartment complex at the intersection of Holly Hall and El Rio and blocked off nearby roadways.

Officials determined the scene was secure by 11 a.m.

HPD’s SWAT team responded to the scene shortly before 10 a.m. for a “possible barricaded suspect,” according to the department.

The officers were transported to the hospital, said Joe Gamaldi, president of the Houston Police Officers’ Union.

“Please keep them and all of our officers in your thoughts and prayers, we need them right now,” Gamaldi tweeted.

“We’re pulling for the two Houston Police Department officers who were shot this morning in Southwest Houston. Still an active situation.  Please keep them both in your thoughts,” Hidalgo tweeted.

The scene remains active and police urge people to avoid the area.

Police said they will provide more information at a 12:30 p.m. briefing.