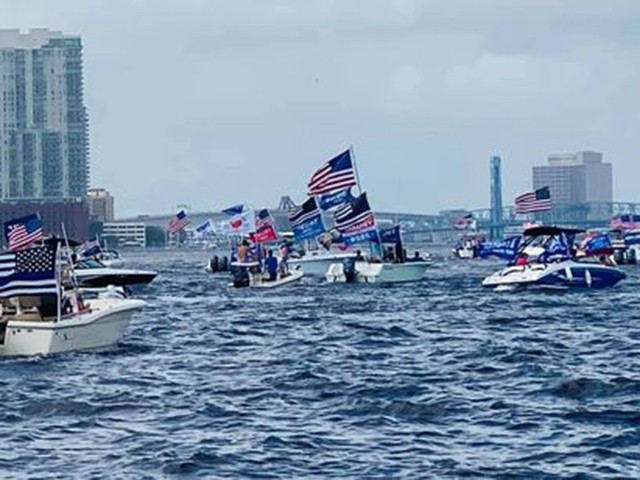 Hundreds of boaters gathered for a pro-Trump boat parade on the waters near Jacksonville, Florida, over the weekend while thousands more Trump supporters turned out in Miami for another massive event on Monday.

“Hundreds of boats took to the water in Jacksonville on Sunday afternoon doing a parade on both the north and south Bank of Jacksonville’s Riverwalk,” Candler said.

“Supporters lined the bridges waving flags along with horns and signs,” he added.

In Miami. Cars were counted by helicopter.
It took 3 hours just to get onto the route. 55,000 counted at the meeting point, another 20,000 joining the line.

Marc Caputo reported there were “miles of honking cars & trucks waving Trump & American flags.” He also said a resident was denouncing the “smattering” of Biden supporters as “communista!”

Southwest 8th Street has that Calle Ocho-MAGA vibe, miles of honking cars & trucks waving Trump & American flags (a few Cuban ones, too). There’s a smattering of Biden folks as well, denounced by the guy in the balcony who keeps shouting “communista!”

This Trump Caravan in Miami is still rolling by after 6 hours! Cubans and other Hispanics know that Socialism is the door to Communism. They roundly reject Biden’s Socialst pact with the ultra Left! pic.twitter.com/blBxJCL9VK

Other video showed a carnival-like atmosphere for Trump:

THOUSANDS of Hispanics gathered in Miami today for an anti-socialism caravan and concert in support of President @realDonaldTrump.

Latino enthusiasm for President Trump is very real—and it is growing! pic.twitter.com/1wExbTlgsX

A recent Florida poll found the presidential race is neck-and-neck and that Trump has the support of 43 percent of Hispanics in the state.