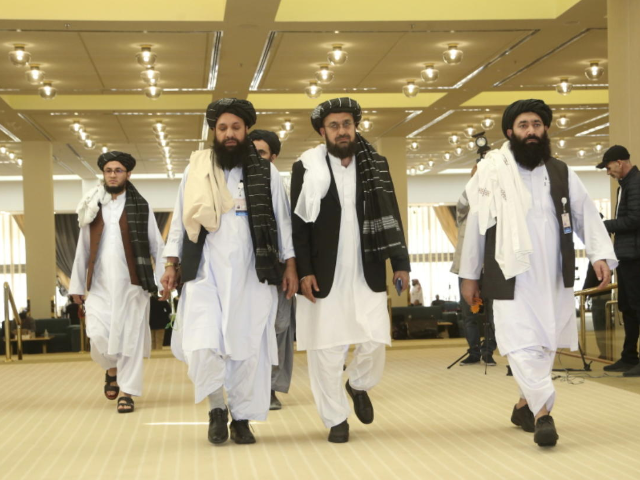 The Taliban accused the U.S. military on Sunday of violating a peace deal the two sides agreed to in February, claiming that the U.S. had carried out “excessive airstrikes” in areas of Afghanistan’s southern Helmand province occupied by the Taliban and elsewhere in the country.

Muhammad Yousuf Ahmadi, a spokesman for the Islamist terror group, said the peace agreement signed in Doha, Qatar, on February 29 prohibits U.S. forces from launching airstrikes in areas other than combat zones.

“All contents of the U.S.-Islamic Emirate [Taliban] agreement are unambiguous, but the opposite side has violated its commitments on numerous occasions, are engaging in provocative actions and bombing non-combat zones,” Ahmadi claimed in a statement.

“In recent days, the United States forces conducted day-and-night airstrikes in Nahri Saraj, Khoshkawa, Babaji of Helmand province, including areas in Gereshk, Sangin, Nawa, and Nad Ali districts,” Ahmadi said. “Also [airstrikes] in Farah and other provinces, which is a clear violation of the Doha agreement.”

Col. Sonny Leggett., a spokesman for U.S. forces in Afghanistan, responded to Ahmadi’s statement on Sunday.

“We categorically reject the Taliban’s claim the United States has violated the U.S.-Taliban Agreement. U.S. airstrikes in Helmand and (western) Farah (province) have been and continue to be solely in defense of the ANDSF as they are being attacked by the Taliban,” he wrote on Twitter, referring to the Afghan National Defense and Security Forces.

“These strikes are consistent with both the U.S.-Taliban Agreement and the Joint Declaration between the Government of the Islamic Republic of Afghanistan and the United States,” Leggett continued.

“The entire world has witnessed the Taliban’s offensive operations in Helmand — attacks which injured and displaced thousands of innocent Afghan civilians. We reiterate our call for ALL SIDES to reduce the violence to allow the political process to take hold,” he concluded.

The Taliban staged large-scale offensives in Helmand province last week, “making territorial gains in and around Lashkargah, the provincial capital, and blocking roads leading into the city,” according to the U.S. government-funded Voice of America.

“The highway between Lashkargah and Kandahar – Afghanistan’s second-largest city – has been inaccessible due to the presence of improvised explosive devices (IEDs),” a flash update issued on October 13 by the U.N. Office for Coordination of Humanitarian Affairs (OCHA) revealed.

The Taliban controls or influences most of Helmand province. The latest fighting in the territory between the Taliban and Afghan security forces has displaced as many as 35,000 civilians and caused roughly 200 casualties, the United Nations (U.N.) reported on October 14.

The Taliban rejects the Afghan government’s rule over the country, regularly targeting Afghan security forces. The U.S. military in February said it would begin a phased withdrawal of troops from Afghanistan if the Taliban and the Afghan government agreed to peace negotiations. The two sides agreed to the U.S.-brokered talks, which began on September 12 in Doha, Qatar. Despite the ongoing peace process, the jihadi terror group has continued to attack Afghan security forces, although it has stopped targeting U.S. and NATO troops, who support Kabul’s internationally-recognized government.