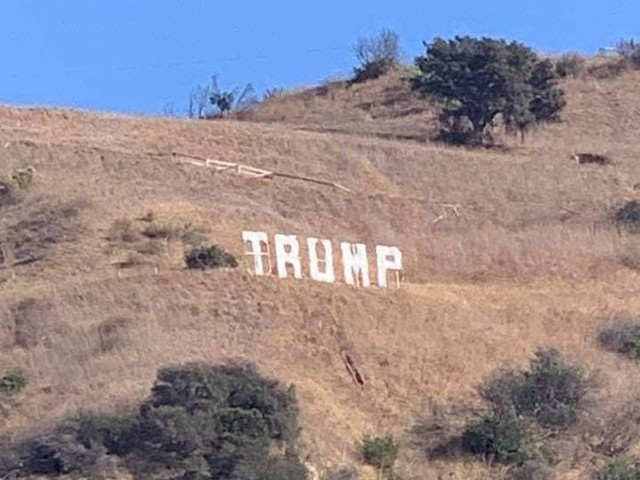 A large “Trump” sign — similar to the American landmark “Hollywood” sign that overlooks Los Angeles — was spotted in Riverside County along route 91 on Tuesday.

“They did it again in Cali. Orange County on Anaheim Hills on Rte 91. MAGA!” wrote one individual on social media, alongside a purported photo of the Trump sign.

They did it again in Cali. Orange County on Anaheim Hills on Rte 91. MAGA! pic.twitter.com/o3mwGV4CCM

“Found 2 more pics posted by other people cause I was paranoid this was fake,” another person said, sharing two additional photos of the sign.

Found 2 more pics posted by other people cause I was paranoid this was fake 😆 pic.twitter.com/Luop64J2Jd

Anaheim Police Department Sergeant Shane Carringer told Breitbart News that a helicopter was flown over the area to find the Trump sign, which was determined to be located in Riverside County, alongside the major highway route 91.

“There is a Trump visible sign visible in Riverside County,” said Sergeant Carringer.

Earlier this month, another similar “Trump” sign made up of large white letters appeared in the Sepulveda Pass hills near the 405 Freeway but was promptly taken down by authorities, according to a report by Los Angeles Times.

Laura Wonder , chief public information officer for the California Department of Transportation, noted that this particular sign had actually been on private property and that department workers “laid it down so it wasn’t a visual distraction,” but did not go as far as to remove it due to it being on private property.

“This was a life and safety issue because there were concerns about distracted driving,” Wonder said.