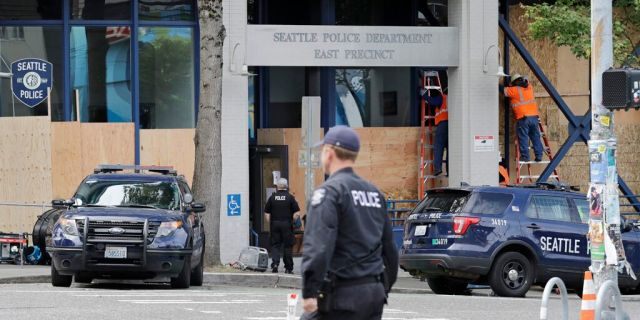 The exit interviews by officers leaving the Seattle Police Department shine a spotlight on the discontent and frustration within the agency with some saying they felt a lack of support and concern for their well-being amid protests, a new report claims.

Officers who have decided to retire or work elsewhere during or following the months of civil unrest in the city said their discontent, in part, was a result of leaders’ political agendas and calls for law enforcement to be defunded, reported KOMO News, which examined the exit interviews.

“I refuse to work for this socialist city council and their political agenda. This agenda sacrifices the health and well-being of the officers and ultimately will destroy the fabric of this once fine city,” explained an outgoing patrol sergeant who had decided to retire after more than two decades with SPD, according to the report.

A spokesperson for the Seattle Police Department did not immediately return Fox News’ request for comment.

Workers put up plywood over the windows of a Seattle police precinct Monday, June 8, 2020, in Seattle. (AP Photo/Elaine Thompson)

According to KOMO News, a common theme was officers’ frustration surrounding the lack of consequences for people committing crimes during protests and riots or against police department employees.

When asked if he’d be willing to return to the department in the future, a veteran police canine officer with than 10 years with SPD reportedly responded bluntly: “I highly doubt it.”

“You could pay me twice what you’re paying me now and I would not work for Seattle under this current political mayhem, Marxist collaborations, and lack of government and police leadership,” the officer wrote.

One patrol officer who had worked for the department for six to 10 years said they decided to resign because of the “current hostile work environment.”

“In a precinct that is under civil unrest by a small group that is constantly committing multiple felonies and attempting to murder peace officers,” the person’s explanation continued, according to the report. The person later added that they largely enjoyed working with Seattle PD, but “[t]he one thing that I enjoyed the least was the handling of the last three months of riots.”

Another outgoing officer said department morale has been negatively impacted by “the council wanting to defund us and gaining ground doing it. Rioters not being charged even when they assault officers,” according to the report.

In addition to civil unrest, including at times riots, SPD’s $400 million annual budget was cut by just under $4 million so that money could be reallocated to other city programs.

As of the end of September, SPD employed approximately 1,400 officers, but the exact number of officers to be cut as a result of the budget decrease wasn’t clear.

Seattle’s top cop, Carmen Best, announced in August she was retiring from her role as the city’s first Black police chief after the city council announced its initial plans for budget reductions, which included cuts to the salaries of department members and plans to slim the department by up to 100 officers.

At a news conference following her announcement, Best said she was fine with a cut to her own pay, but was not OK with decreases in the salaries of young officers, as many of whom were minorities who were hired in part to make the department more diverse.

“That, for me — I’m done. Can’t do it,” she said at the time. “It really is about the overarching lack of respect for the officers.”