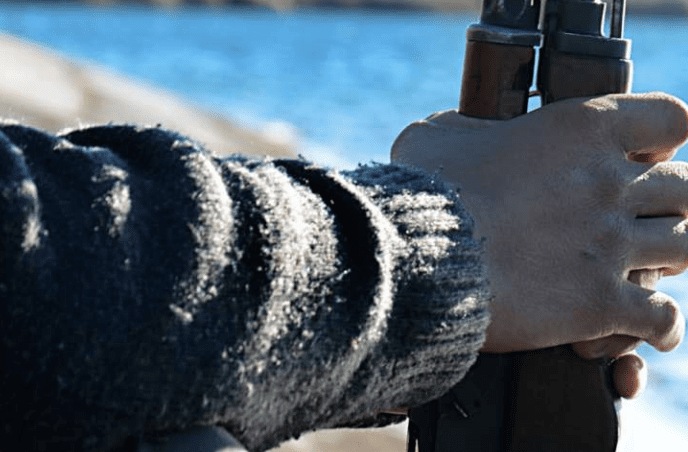 A new issue of the ISIS magazine that in recent weeks encouraged the murder of those accused of blasphemy contains a full-page graphic urging more attacks and showing the severed head of the French teacher killed Friday.

Samuel Paty, 47, received death threats on social media after his recent class studying freedom of expression in the context of the Charlie Hebdo Muhammad cartoons. The history teacher had asked Muslim students to leave the room before he showed the caricatures so that they would not be offended. One Muslim student stayed and told her parents, who filed a complaint against Paty; the father posted a video on social media railing against Paty, stating the school’s address, and calling for “mobilization” against the teacher.

Abdullakh Anzorov, an 18-year-old Chechen with a minor criminal history who had lived in France from the age of 6, traveled 60 miles from the Normandy town of Évreux to the school in Conflans-Sainte-Honorine. He had no connection to Paty and reportedly asked students outside of the school to identify the teacher. Anzorov then followed Paty as he walked home from work, stabbing and beheading him with a 12-inch knife.

Before police arrived at the scene, Anzorov uploaded video and photos of the attack to other ISIS supporters. A Twitter post attributed to Anzorov included a severed head photo and stated, “In the name of Allah, the Most Gracious, the Most Merciful. From Abdullah, the Servant of Allah, To Macron, the leader of the infidels, I executed one of your hellhounds who dared to belittle Mohammed, calm his fellows before you are inflicted harsh punishment.”

Anzorov was shot to death by police after he reportedly fired an airgun at officers and tried to stab them.

In August, an English-language monthly magazine produced by ISIS supporters urged followers to “race” to emulate the Charlie Hebdo attack, arguing that governments aren’t doing enough to punish those viewed by the terror group as blasphemers.

“The Voice of Hind,” released online by ISIS supporters in India, subsequently responded swiftly to the Paris attacks with a full-page graphic on the last page of the newest issue released today.

The magazine’s earlier issue told Muslims that “the governments you live under are providing full support and protection to every person who attacks our beloved prophet, under the pretext of freedom of expression.”

The article then called the 2015 Charlie Hebdo mass shooting, in which brothers Chérif and Saïd Kouachi killed 12 people at the satirical magazine’s offices, attack an operation “with Faith and riffles [sp]” to “wreak havoc in the broad daylight to avenge the Messenger (PBUH) for being abused by this newspaper.”

The Kouachis and “all those brothers who come out” to attack accused blasphemers are “leaving a clear path for others to follow,” the magazine stated, as “we cannot expect the disbelieving and apostate governments to carry out the punishment for the blasphemy prescribed by Islam.” That punishment, the article continued, is “nothing but death,” and followers should “race to one another to carry out this obligation.”

“If we do not become forceful, then the assaults on our religion… will continue,” the text stated, calling on supporters to “take revenge on each and every one who has insulted our beloved Messenger (PBUH).”

Subsequently, on Sept. 11, al-Qaeda in the Arabian Peninsula issued a message calling on Muslims living in France to conduct attacks, referencing the Charlie Hebdo attack.

Since Paty’s murder, French police have arrested four students, four relatives of the killer, the father who launched the social media campaign against Paty, and an Islamist preacher who, according to Interior Minister Gérald Darmanin, declared a fatwa against Paty.

Will Election Day Be Safe? Physical Threats to Voters and Mitigating Risk