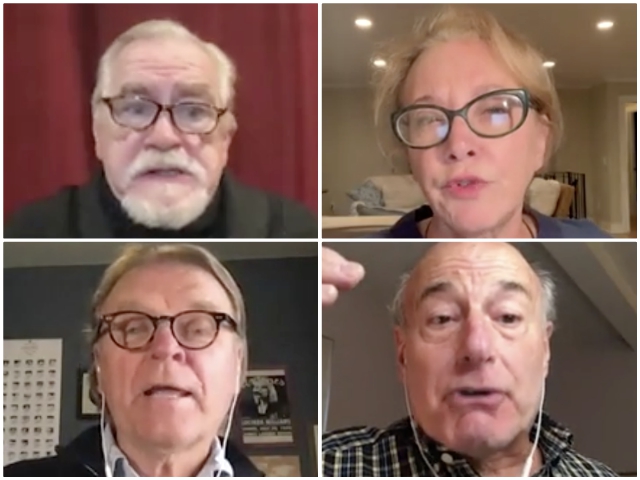 The cast of HBO’s media mogul drama Succession reunited for an profanity-filled public service announcement about how to vote, in which the show’s star Brian Cox proclaims “Fuck off, I’m fucking serious, so go on, fuck off, and fucking vote.”

“Everybody can vote by mail?” asked actress J. Smith-Cameron of Cox in one of the PSA videos.

“Everyone, no excuses needed,” replied Cox. “And anyone who says different, quite frankly, can fuck the fuck off.”

“Can you vote early in Florida?” Smith-Cameron further inquired.

“Fuck off, of course you can,” reacted Cox.

“If you fuck off for a second, I’ll fucking tell you,” said Cox. “Early voting is offered in every county from October 24 to October 31.”

“Well you fuck off, I’m fucking serious, so go on, fuck off, and fucking vote,” Cox reacted.

In another PSA video, Succession cast members warn against submitting “naked ballots,” and acknowledge that “the mail is kinda fucked up these days.”

“And in the last presidential election, Pennsylvania was only won by 34,000 votes,” added Stevens’ co-star Peter Friedman.

The cast of Succession are not only ones in the entertainment industry attempting to get out the vote — specifically by mail.

Rapper Snoop Dogg has allowed the Democrat National Committee to use his 2004 hit song, “Drop It Like It’s Hot” in a new Get Out The Vote advertisement instructing voters on how to use ballot drop boxes for mail-in voting.

A plethora of celebrities, including pop star Jennifer Lopez, and even ONE Musicfest, — one of the largest music festivals in America — have also teamed up with Michelle Obama to promote her “When We All Vote” initiative, which encourages people to vote by mail just as voters around the country report having their mail-in ballots stolen from their mailboxes and tens of thousands voters are receiving incorrect ballots from their local election officials.