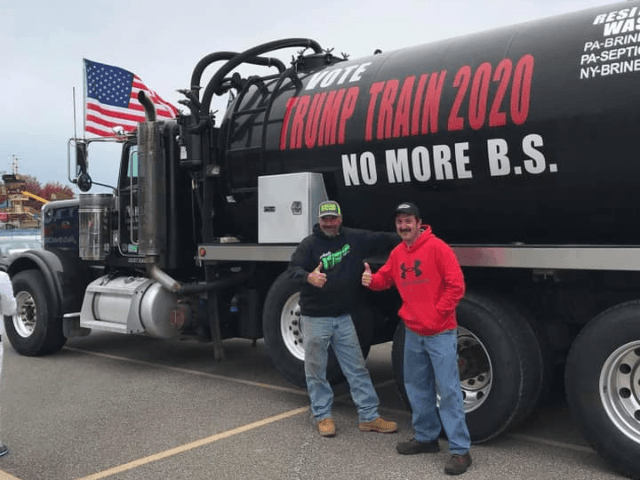 “We remind ourselves that what we’re doing, it matters. What we’re doing is important, and that our country is gonna be better off if Trump is re-elected and that’s it,” Girard resident Jim Nolan told Your Erie.

The parade wound through North East, Fairview, Downtown Erie, and the Peninsula, according to the outlet.

“We want to make sure everybody knows in this town that the silent majority is not silent anymore. We’re here to make noise. It’s a big election. In my lifetime, this is the biggest one I can remember. So, we’re all excited and ready to go vote,” said organizer Brian Shank.

The parade was also dubbed a Back the Blue rally, according to Erie News Now.

“This day long event included merchandise tents, the parade and just coming together with others who think President Trump should stay in office,” the report said.

Participants later shared photos of the vehicles to the event’s Facebook page while another posted video of it on YouTube.

So far, the Trump Train Erie Facebook page has 1,870 members.

One member thanked the organizers for putting on the event and said it was his first time to be involved in anything like it.

“Seeing all the flags and support for our country was very awe inspiring! And a big thanks to all the officers that took the time to help out during the route! God bless America! Trump 2020!!!!!!!!” he continued.

President Trump is expected to make an appearance at his rally in Erie County on Tuesday evening, according to Your Erie.

“This is like a perfect time for an event so we can just get everyone pumped up and excited that our President is coming to town in a couple days and set him up for re-election,” Shank concluded.