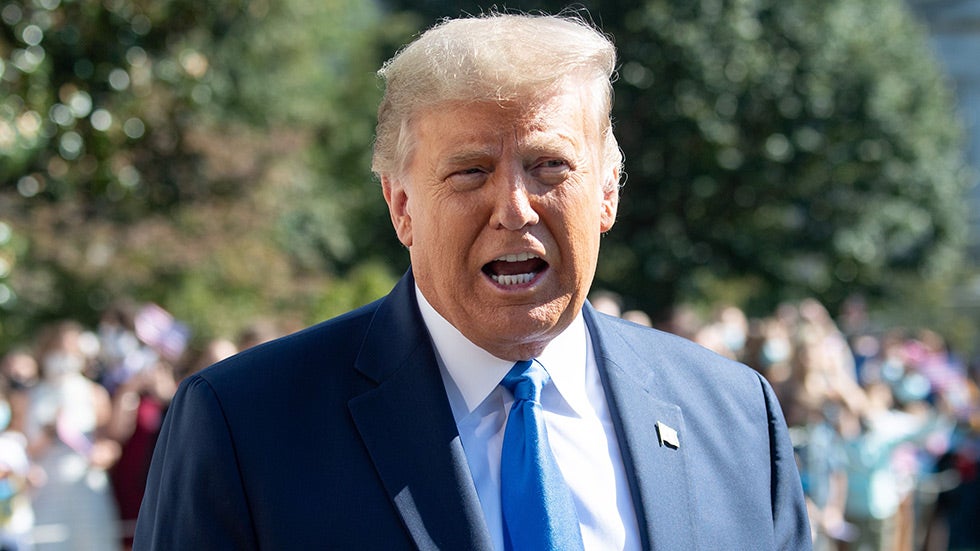 President TrumpDonald John TrumpLatest Mnuchin-Pelosi call produces ‘encouraging news on testing’ for stimulus package China warns it will detain American nationals following DOJ prosecution of Chinese scholars: report Musician John Fogerty issues cease and desist over Trump use of ‘Fortunate Son’ MORE is doubling down on his decision to retweet an unfounded QAnon conspiracy theory that Osama bin Laden is still alive, a move that threatens to alienate members of the military with the election less than three weeks away.

Trump’s amplification of conspiracy theories that bin Laden’s death was faked and that a body double that was killed instead comes on the heels of reports that disparaged soldiers and his suggestion that he may have contracted coronavirus from Gold Star families.

Military observers say the president’s propensity to retweet suspect material about a military operation isn’t likely to help win back any support.

“It’s certainly not going to help him,” Gary Schmitt, a national security expert with the conservative American Enterprise Institute, said of the retweets.

“Most of the folks in the military are there voluntarily, they’re career, they’re not just there for during the term of one president. They have a good sense that they’ve dedicated themselves to a certain life and the president seems to be suggesting that, outside anything else, they’ve been fooled.”

“It can’t help but shake the military’s judgement about his judgment,” Schmitt added.

Trump on Tuesday retweeted an account linked to the QAnon conspiracy theory that promoted the unfounded allegation that bin Laden is still alive. The account has since been suspended, but the following day Trump retweeted a video pushing baseless claims about bin Laden’s death.

“That was an opinion of somebody and that was a retweet. I’ll put it out there. People can decide for themselves,” Trump said of his retweets during his town hall appearance on NBC Thursday night.

Pressed on his decision by NBC moderator Savannah Guthrie, Trump would not disavow QAnon and only replied: “That was a retweet, and I do a lot of retweets.”

But pushing the hoax, which also attempts to undermine a major military achievement that took place when his Democratic rival was in the White House, is not sitting well with some former members of the military who previously backed Trump.

Robert O’Neill — a former Navy SEAL who has publicly said he killed bin Laden in the 2011 raid ordered by former President Obama — chastised the president this week for promoting the unfounded claims.

“Very brave men said [goodbye] to their kids to go kill Osama bin Laden. We were given the order by President Obama. It was not a body double. Thank you Mr. President.” O’Neill, who has publicly supported Trump in the past, tweeted on Tuesday.

“I know who I killed, homie. Every time,” said O’Neill, who was a member of the SEAL Team Six that raided bin Laden’s compound in Abbottabad, Pakistan.

Trump’s troubles with the military escalated last month after The Atlantic reported that he called U.S. troops who died in battle “suckers” and “losers.”

The president has denied making the comments, but kept up tensions with the Pentagon by accusing Defense Department leaders of deciding to send forces into war to appease defense contractors.

Earlier this month, Trump sparked a mini firestorm by suggesting he may have caught the coronavirus from Gold Star families at a Sept. 27 event at the White House.

Trump, who trails Biden in both national polls and key battleground states, has stepped up his promotion on QAnon-linked Twitter accounts since spring. He has retweeted the messages from such accounts at least 258 times, including at least 163 times since early March, according to Media Matters for America, a media watchdog.

But while the move may appeal to staunch supporters in his base, it’s unlikely to gain him any additional undecided voters, including those seen as central to his base like service members, veterans or other military supporters.

“If you’re actually trying to find folks that haven’t made up their mind, it’s hard to believe that this conspiracy mongering is going to play well with them,” Schmitt told The Hill on Friday.

The tactic has instead provided ammunition for his Democrat rivals, including Biden’s running mate, Sen. Kamala Harris

Harris at the vice presidential debate last week cited Trump’s numerous military-related scandals, including his dismissal of troops’ brain injuries in Iraq earlier this year as “headaches” and his repeated criticism of the late Sen. John McCain

John Sidney McCainTrump digs in on conspiracy theory over bin Laden raid At 97, Bob Dole is still fighting for his country Leadership matters: President’s words and actions show he is unfit to lead our nation MORE (R-Ariz.) for being a prisoner of war, to argue Trump has a “pattern” of disparaging the military.

For many in the military, Schmitt said, it’s the fallout from these controversies that can make them lose confidence.

“Trump has taken onboard this idea that you never say you’ve made a mistake. If you’re a commander-in-chief, the people that work for you in the military know that not only can mistakes be made but they will be made,” Schmitt said.

“This inability to own up to the mistake of retweeting has to shake the confidence of those in the military about [his] judgment,” he said.

Trump Admin to Use Seized Iranian Oil to Help Families of...