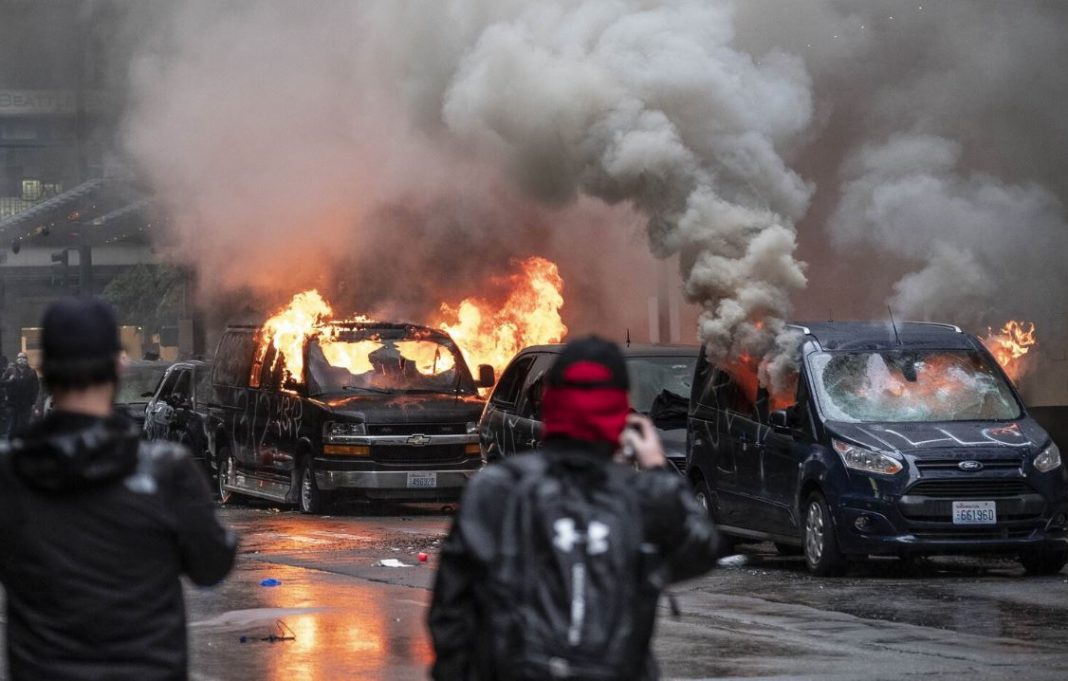 Seattle has had 110 officers leave the Police Department this year, including 39 officers last month, according to an update from the department.

The department made 51 hires earlier this year, before the COVID-19 pandemic hit and Mayor Jenny Durkan implemented a temporary hiring freeze.

The separation numbers may elicit mixed reactions and interpretations as city leaders and residents continue to debate whether Seattle’s police force should be reduced and by how much.

Proponents of shrinking the force have said mental-health professionals, social workers and community-based safety teams can substitute in many cases for officers with guns who too often hurt people, especially Black people. Seattle has since 2012 been subject to a court agreement with the U.S. Department of Justice requiring the Police Department to curb excessive force and biased policing. Skeptics have warned about spreading the city’s force too thin.

This September, according to the department, 36 fully trained officers and three officers-in-training separated.

Year to date, there have been 53 resignations, 50 retirements, six terminations and one death, according to the department.

Of the officers who resigned, 26 said they were moving to another law enforcement agency, 17 cited “personal reasons” and 10 cited no reasons, Durkan’s office said.

The department and Durkan shared the new data on officer departures with reporters Thursday before briefing the City Council, said Councilmember Lisa Herbold, who asked for an update on separations last month.

The department has grappled this year with the COVID-19 pandemic and massive street protests. Police Chief Carmen Best stepped down last month and her replacement, interim Chief Adrian Diaz, promptly reassigned 100 officers and supervisors who had advanced to specialty units, back to patrol duties. The Fire Department also has had more separations than expected this year, Herbold said.

The city’s 2020 budget included funding for a target of 1,422 officers, including recruits, officers-in-training and officers on leave. The department had 1,203 officers available for service by the end of September.

The 2021 city budget proposal that Durkan sent to the council last month would include funding for a target of 1,400 officers, with this year’s hiring freeze lifted. The council is working on amendments before approving a budget in November.

Durkan and council members have been clashing for months about reductions to Seattle’s force. Reacting to demands by advocates over the summer, amid Black Lives Matter protests, most council members expressed support for redirecting 50% of Seattle’s police budget to other needs and services. The mayor has opposed cuts at that scale.

During midyear budget adjustments in August, the council passed legislation asking the Police Department to lay off several dozen officers and withholding funding for those officers in November and December. The mayor vetoed the legislation, but the council overrode her veto in September.

The parties now agree the layoffs probably won’t occur this year. That means the council may need to release the November and December funding for the officers who were on the chopping block.

There isn’t much time left in 2020 and the layoffs need to go through union bargaining. A city rule says new officers should be laid off first, while the council wants officers with records of misconduct laid off, under a potential exception to the rule.

Durkan has warned that laying off new officers first could result in more young officers and officers of color being let go.

White police officers have accounted for 79 of the 110 separations this year.

The city should continue to increase spending on public-safety alternatives, Durkan said in a statement. At the same time, she said, “We are losing an unprecedented number of officers, which makes it even more critical that we recruit and retain officers committed to reform and community policing that reflect the diversity and values of our city.”

Losing additional officers could impact 911 response times, investigations and work required by the city’s police-reform court agreement, the mayor’s office said. Of the 110 separations in 2020, 64 have left from patrol.

Herbold, who chairs the council’s public safety committee, said the council has been pushing the Durkan administration to ramp up public safety alternatives more quickly. The council allocated $14 million in midyear budget adjustments for that purpose and is now working on more actions to offset officer reductions with new responses, she said.

“The place where there’s agreement between traditional public safety advocates, the police and people who want a smaller department is that by having officers do less, they can focus on things that need armed responses,” Herbold said.