Home Blue Lines Officer who was with Chicago police chief the drunken night that ended... 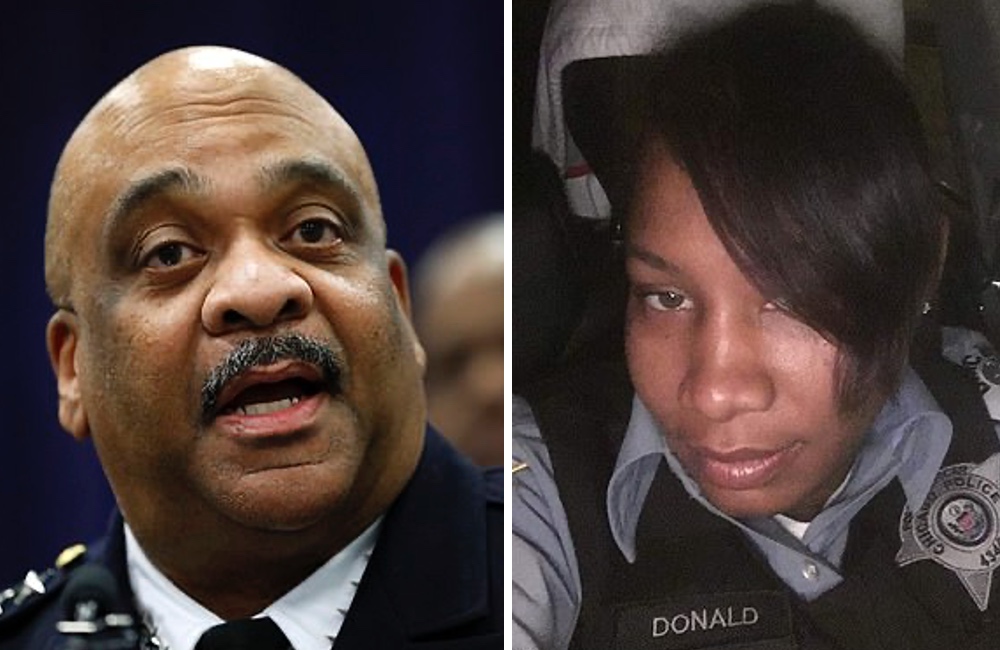 Chicago Police officers made a series of critical mistakes ranging from not supervising young officers to improperly handling body-worn camera footage after former Superintendent Eddie Johnson was found asleep in his car a year ago, having consumed the equivalent of 10 drinks, according to an inspector general report released today.

The probe by inspector general Joe Ferguson into the events of Oct. 16th and 17th of last year, when Johnson was found asleep inside his running city vehicle after a night of drinking with a member of his security detail, did not conclude that any individuals deliberately covered up for the superintendent.

But the report, released a year to the date of the incident that led to Johnson’s firing, still paints a picture of special treatment for Johnson, as it details for the first time what seven department members did — or failed to do — when Johnson was found at the intersection of 34th Place and Aberdeen Street in the Deering District, just blocks from his home.

Among the missteps outlined in the report were that the officers failed to ask Johnson where he had been or how much he had had to drink, and then allowed him to drive home despite their concerns that he was unfit to drive. Two officers followed him, apparently out of a concern for his safety, the report said.

“Multiple sworn CPD personnel failed to effectively carry out their duties in compliance with policy in the handling and aftermath of the … incident,” the report reads.

“By allowing the superintendent to drive home despite concern for his condition, the officers failed to promote CPD’s goal of protecting the public and brought discredit on CPD, specifically, because their actions created the impression of giving the superintendent preferential treatment.”

Additionally, the inspector general concluded that the response raised questions about training and supervision, noting that only one of the officers on the scene activated their body-worn camera and none conducted tests to determine if Johnson was impaired, as policy requires.

The report also noted that the stop was initiated by two probationary officers who, despite having no more than three years experience between them, had been assigned as partners. Neither had ever handled a DUI, the report said.

While Ferguson’s office conducted the investigation into what happened, punishments were determined by Chicago police Superintendent David Brown.

The most serious punishment issued by the department, according to the report, went to the commander of the Deering district, Don Jerome. A 26-year veteran, Jerome faces a 28-day suspension for failing to file a report on a district lieutenant who recorded footage of the DUI from the body-worn camera on their cell phone, a department violation. The lieutenant then forwarded the recording to Jerome.

Jerome, when reached by the Tribune, declined to comment.

It is notable that the stiffest penalties were reserved for the highest-ranking department members involved, an apparent effort by police brass to hold supervisors accountable – a practice critics say has been sorely lacking in the department for decades.

The lieutenant faces a 21-day suspension – though Ferguson had recommended termination because the lieutenant also lied during interviews with the inspector general when asked about the recording of the footage, according to the findings in the report.

As for Johnson’s conduct that night, he had announced he would resign in the wake of the incident only to be fired by Mayor Lori Lightfoot before the full investigation was completed.

Lightfoot had initially celebrated Johnson at a press conference to announce the retirement. But she later changed course, announcing he would be fired after she learned he had intentionally misled her about the events of the evening.

Johnson initially publicly blamed the incident on his failure to take blood pressure medication but privately told Lightfoot he had “a couple of drinks” with dinner that evening, which she disclosed in an interview with the Sun-Times.

The inspector general’s investigation, released in two parts, revealed that Johnson had been drinking that night at Ceres Cafe, a downtown restaurant famous for heavy pours, with his driver, later identified as Officer Cynthia Donald, who was assigned to his security detail.

The inspector general’s report on Friday revealed, for the first time, that Johnson had consumed “the equivalent of approximately 10 alcoholic beverages” that evening.

Johnson dropped Donald off at police headquarters in the Bronzeville neighborhood at about 10:30 p.m., and drove his SUV toward his home. Security footage showed he was illegally parked at 34th Place and Aberdeen Street at 10:39 p.m. He remained there until a member of the public called 911 to report someone was asleep in a vehicle. Officers arrived at 12:33 a.m., according to the investigation.

Her name was not used in the report. But the IG document states an officer now faces a seven-day suspension after the inspector general concluded they had “consumed several large servings of rum while at a restaurant with the CPD superintendent” and then drove a city vehicle.

She could not immediately be reached regarding the findings in the inspector general’s report.

Donald was removed from Johnson’s security detail in the wake of the incident, and is currently on medical leave.

In a stunning new development, Donald on Thursday filed a lawsuit against Johnson alleging that he sexually assaulted her over a three-year period. The lawsuit describes “shockingly violent” sexual abuse and workplace harassment.

Johnson strongly denied the allegations in a statement to the Tribune, calling the accusations “patently false” and “egregiously dehumanizing towards true victims who have truly suffered sexual assault and harassment in the workplace.”

Johnson has also previously acknowledged a “lapse of judgment” on the night in question but denied lying about the incident.

The bulk of the inspector general’s report Friday dealt with the department members who responded that evening to what it referred to as a DUI stop. The report did not include the names of any involved department members, but sources have confirmed the involvement of Jerome and Donald.

The two probationary officers who responded to the initial call and failed to ask Johnson about his drinking earned one-day suspensions. A sergeant who was at the scene faces a 14-day suspension and two other police officers face seven days each for allowing him to drive home, despite concerns about his condition.

According to the inspector general’s investigation, the officers who followed Johnson home observed him run a stop sign and briefly drive in the wrong lane.

The report by the IG also recommended additional training for officers involved, including on the body-worn camera policy and how to conduct a DUI stop. It also suggested a review of pairing of department members to ensure competent investigations that “strengthen understanding and expectations that situations involving possible legal infractions of sworn personnel be met with the same rigor and standard of care as those involving members of the public.”

‘He Ain’t a Racist, and a Damn Good President’